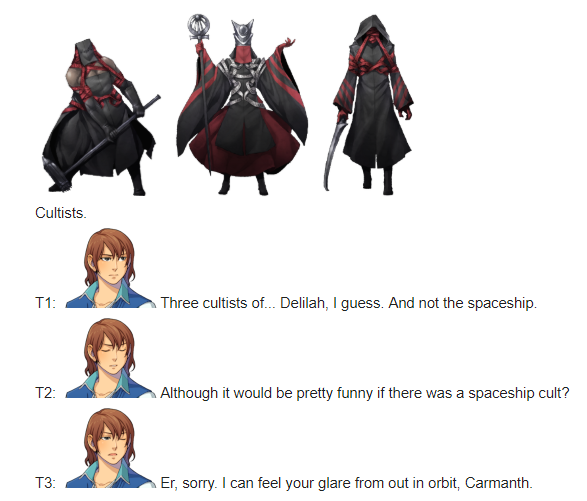 My imagination makes me human and makes me a fool;
it gives me all the world, and exiles me from it. -Ursula K. Le Guin


Hey. So, uh, Wine & Roses is now out. The only issue I know of is that I accidentally left a typo in Argent's menu bio. Whoops.

It's about four hours long, possibly more if you're terrible at it. I highly recommend trying out different combinations of skills and gifts if you're in a bind; it's amazing what the right skill can do for you.

If anybody needs help with a particular enemy, feel free to ask! If nobody else can help you (use hide tags, please), then I'll step in.

Invention, it must be humbly admitted,
does not consist in creating out of void,
but out of chaos. -Frankenstein, Mary Shelley


Before I even put a single enemy into the database of Wine & Roses, I sat down and made a list of roughly fifteen ideas for interesting (yet easily understandable) battles. Gimmicky battles with confusing or subtle tricks weren't useful to me. My basic criteria was this: if my battle narrator couldn't fit the idea into his one-line message box, it wasn't appropriate. Ideally, Francisco wouldn't have to say anything in particular to get the idea across, but sometimes it's necessary for clarification or purposeful redundancy.

So, for example, the Infernal Machine fight requires no direct commentary from Francisco; he's free to be a witty narcissist. The boss follows a simple pattern of two minor, easily-avoided attacks for two turns and then every third turn it unleashes Moloch's Furnace for catastrophic Solar damage to all three of the ladies you play as. The premise and solution are clear: it deals lots of Solar damage at once, so you need to optimize your exorcists to not take much Solar damage.

A battle that required some actual help from Francisco is the battle against Red, Yellow and Indigo. They use weapon, Solar and Lunar attacks respectively, and are in general easily dealt with in ways I won't cover here since the game's almost out. Still, it's the first fight in a while that has multiple units, and so Francisco reminds you that "these lovely ladies will be furious if one dies, surely." This is a quick reminder going back to some of the first fights in the game, where enemies would gain additional actions each turn when their allies fell, encouraging you to kill them all at once, or to disable them through non-lethal means while focusing one at a time. It's also the earliest appearance of the Douse ailment, so it's mentioned that "being Doused means you evade less and take more Solar damage."

And lastly, there were fights that I simply decided not to put in the game because they were too awkward to explain well, and couldn't be easily noticed by playing the fight. This mostly has to do with conditional damage/attack usage. A boss using Dreadful Lunge every other turn is obvious; a boss using Dreadful Lunge only while suffering three or more ailments is obnoxious and sounds stupid if Francisco tried to explain it: "this guy looks like he'll use a powerful attack when under a lot of ailments" sounds just... no. That's not going in my game.

In a game designed to present a unique experience in each battle, I had to make them both approachable and special -- I hope I succeeded without overwhelming the player. We'll find out in a few days...

How blessed are some people, whose lives have no fears, no dreads; to whom sleep is a blessing that comes nightly, and brings nothing but sweet dreams. -Dracula, Bram Stoker


Wine & Roses is a mix between Shadow of the Colossus, the Megaman series, and RPGs in general. Added to the mix is my own insanity and depravity, along with my knack for creating ridiculous RPG battle systems.

Here's how the game plays out: you control three exorcists who must explore a giant, haunted fortress and slay the demons within. There are only a handful of battles, and each one is designed to be a challenge. Subduing the evil beings will grant you access to new spells that will help you overcome any other beast, but usually one or two in particular. I hope that the SotC and Megaman inspiration is clear here!

While any of your exorcists can use any of the spells you learn (but only four out of the twenty-seven, and there cannot be any overlap; in short, you can take twelve different spells into battle), they are also unique in important ways. They know two inherent weapon attacks and, if you can find the spirit willing to teach them, a third can be unlocked. In addition, each lady has a simple buff permanently attached to their skillset. These buff abilities also remove an ailment from the ally it's used on, making them even more useful.

What sets each of the ladies apart are the Gifts that are bestowed upon them. Finding a spirit who offers Argent the Kurikara means that Argent can choose to equip that Gift, but Carmanth or Nynavae could never use it. There are nine Gifts unique to each of the three exorcists, but each lady can only equip four Gifts at a time.

Combining Gifts and spells is essential to defeating each of the monstrous demons inhabiting Fort Adder. There is no leveling system, and so it's possible to defeat any of the demons at (supposedly) any time... assume you're prepared to meet the challenge.
Pages: 1