2 reviews
Save to Dropbox
It's the evening of October 30th in the small villa of Hallow's Eve, but something is amiss. The goblins and ghouls have all discovered their most precious possessions have vanished!

Agatha, the witch; Delila, the vampire; and Bobby, the ghost have decided to set out to try and locate these items. If they can't find them before the next day, Halloween will have to be cancelled. Luckily, Agatha has picked up a possible lead as to where the culprit has fled.

Join the three girls as they try to save both Halloween and their home.

An All Hallows' Event entry that we should hopefully have mostly playable in time was not finished even close to on time. Expect to be overwhelmed with orange. 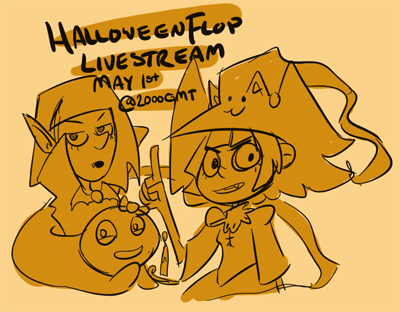 So originally we were just going to post a list of references in the game, but we thought it might be fun to mark the one month since release date with a livestream of us playing the game and mentioning all the little references and things that you might not have seen. So join us at Maki's livestream channel tomorrow at 8 pm GMT (1 pm MST / 3 pm EST) if you're interested.

In which dithering was used

In which a mummy looks very tasty

Close
03/16/2015 01:18 AM
I loved that there were options after losing a battle so that players were not forced back to the menu screen, like some games, to start at the last saved game.

I'm a huge fan of Halloween games but not so much of the horror genre so I really enjoyed this.
Griffonmender

Close
09/23/2017 06:54 PM
I just tried this game today, and no matter what I do the party runs straight up to the topmost point of the map they can reach after the intro, and all I can do is walk left and right up against the wall in the middle of the screen.
Moving down doesn't work with keyboard or mouse controls.
Saving and loading doesn't work, nor did starting a new game.

I don't think it helped that the little text document that made the game run required two folders that didn't actually exist in the unzipped file (system and data, specifically), and that I had to make them and stuff the appropriate files into them myself.

Is there anyway to fix this?
I have the RTP, and the folders and text doc are as matched up as I could make them, so I have no idea what else I can do.
I'm mostly disappointed, as I wanted to play this game as part of my Halloween let's play event, but I literally can't even make it to the npc slime-thing one to two rows down, let alone get to anything of interest with this glitch acting up like this. ^ ^;
Racheal

Close
09/23/2017 09:49 PM
Something seems off about that. I just downloaded from the link on this page, unzipped, and this is what the result should look like:

Regardless, your error seems like a keyboard issue. Are you holding a key when you launch the game? Do you have a sticky up key? Do you have a controller plugged in? I cannot replicate your issue, so I can't really help. (Also I find it funny that you mention mouse controls when there is no such support?)
Griffonmender

author=Racheal
Something seems off about that. I just downloaded from the link on this page, unzipped, and this is what the result should look like:

Regardless, your error seems like a keyboard issue. Are you holding a key when you launch the game? Do you have a sticky up key? Do you have a controller plugged in? I cannot replicate your issue, so I can't really help. (Also I find it funny that you mention mouse controls when there is no such support?)

Mouse controls are a possibility in MV, at one point when I clicked by mistake it looked like the character moved to that square, and when you're desperately trying to figure out how to fix something, you kind of try everything. ^ ^;

My download looked nothing like that- as I mentioned, there were no folders for System or Data, and there was no RPGVXAce project file either.

I do not have any sticky keys, nor do I own a controller, nor was I holding any keys while launching the game.


I did just try to slap in files from a Ace game that does work, and that seems to have done the trick- somehow.

Close
09/23/2017 10:19 PM
Clearly something went wrong with the download then. The game is stand alone and should not require any other files. Like I said, this screenshot was taken from a fresh download/unzip and is how it should look. The other option I suppose is an anti-virus got overzealous, but the reason I use a zip and not the default exe package is to avoid most instances of that.
Pages: 1