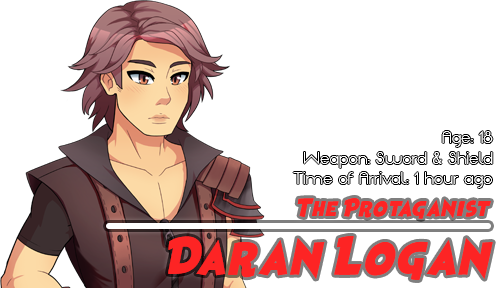 Bio: One of the five who were spirited away to the world of Palasiel, Daran is the designated "main protaganist". Not one to get himself involved with trouble, a strong sense of responsibility guides him on his journey. He is told one thing: You are the "chosen one". There is an "evil lord" to defeat. Go.

Daran's given class is the "Warrior". He is typically balanced in both offence and defence. He can draw enemy attacks with his "Taunt" arte, and completely nullify damage for a turn with his "Sentinel" arte. He's also one of the very few people to deal elemental damage with his wide range of elemental artes before the player meets a dedicated mage. 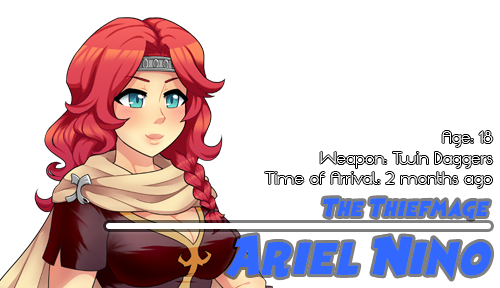 Bio: One of the five who were spirited away to the world of Palasiel, Ariel is not the token soft-spoken White Mage, despite what her position in the party may have you believe. Ariel is a spunky individual, proficient in the arts of healing magic and thievery. Having arrived in Palasiel 2 months before the start of the story, she has had time to venture around. She is a key member of the Palasiel Rogues, a resistance group looking to liberate their kingdom.

Ariel is dubbed a "Thiefmage". She is a hybrid of a white mage and a thief. She boast incredible speed and magic stats, but falls short in other areas. She has a versatile range of supportive magic at her disposal and is able to deal Holy magic damage with her "Lum" artes. She can also inflict status ailments with certain artes such as her "Still of Night" arte and then deal major damage against enemies with stacked ailments with her "Assassinate" arte. She can also steal items from enemies. Doing this against certain enemies may have other effects too. 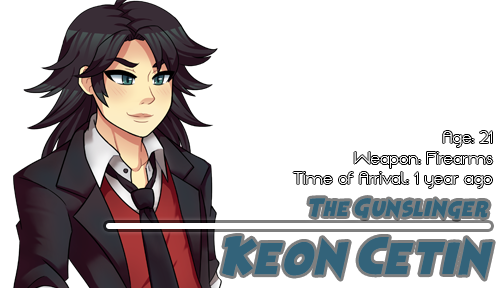 Bio: One of the five who were spirited away to the world of Palasiel, Keon is a suave and cunning individual and fancies himself a hit with the ladies. Despite being in Palasiel for a considerable amount of time, he actually enjoys being there and hasn't thought about going back.

Keon's role in battle is somewhere between a support character and a technical attacker. He's got the right tools for specific jobs, and can buff the party with many boons with his "Bulletcraft" artes. He's also able to use his hunting skills to deal major damage to certain enemy types with his "Golden Bullet" artes! 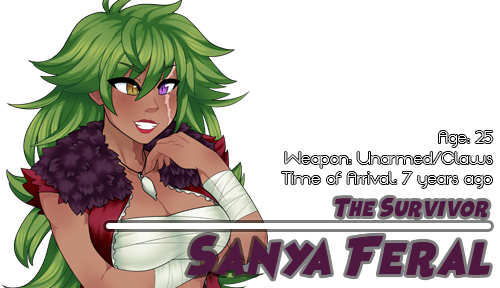 Bio: One of the five who were spirited away to the world of Palasiel, Sanya has a lot of experience in this world, having been there the longest. A charming individual, often calm and composed. She's spent a lot of time in the wild honing her survival skills and is currently in prison for murder.

Sanya's playstyle revolves around heavy hitting "Berserker-class" artes as well as being able to learn enemy artes to use as her own! 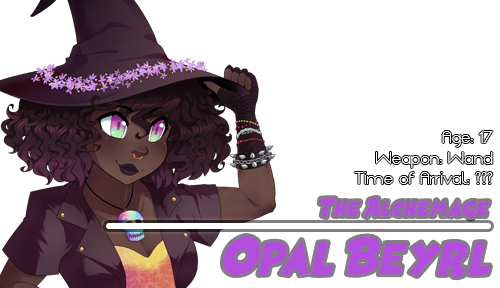 Bio: One of the five who were spirited away to the wold of Palasiel, Opal Beryl is a young girl blessed with the gift of magic and intelligence, even if she doesn't always act like it. She is a very upbeat and energetic girl who has proficiency in alchemy! Opal has travelled back in time from a future where everything went to chaos.

Opal is an "Alchemage" which is a hybrid class of an "Alchemist" and a "Black Mage". Her role is the dedicated magic DPS, and can access higher tiers of elemental magic by using her "Augment" arte. She can also user her alchemy skills to create supportive or offensive items user her "Mix" arte.