This review covers the Demo A release.

Palasiel Quest is an RPG parody game chocked full of custom assets including voice-work, beautiful music and fantastic art. It certainly looks and sounds good, but how does it fare overall?

Let's start with the story, which literally starts with the game creator talking to you, which honestly, in most cases, isn't a good sign in an indie game (as it generally means the developer didn't know a good way to start the game). In this case it isn't strictly a bad thing. Thanks, creator-god and maker of this RPG.

Right away, you'll notice that all the major lines are voiced. Now, I generally frown on voice acting in indie RPGs, as nothing ruins a decent story as much as terrible voice acting. However, I was pleasantly surprised in this case, as most of the voice acting is terrific.

The Creator shows us the battle of heroes in the Final Hall of the Final Dungeon battling The Final Boss. They manage to seal him away, but because he's not dead, the Creator puts the heroes into limbo until they are needed again.

We then take control of Daran, the main protagonist. And the characters helpfully refer to him as such. We're introduced to Ariel, the water-absorbing "Thiefmage," and Saoirse, a knight-apprentice who needs our help to collect a bunch of sigils from a nearby forest. And from there, the adventure begins!

We are given a bunch of items for our quest and transition instantly from the starting house to the forest. It seems like there was planned to be a town here that you could revisit for rest and supplies, but it's seemingly absent, most likely due to time constraints, I'm guessing.

From there, the rest of the demo is spent exploring the forest, gathering the sigils, and dealing with a dark presence who oddly enough looks and sounds just like Saoirse.

The first thing that struck me about the game is the level of polish. Beautiful art and music, (seriously, I am totally in love with this game's art and soundtrack) a lot of custom assets, a custom battle system (which is still the basic turn-based affair, but looks sleek and feels neat). There is also a great Skit event system, which will seem familiar to anyone who's played a Tales Of game recently. Press "S" after events when prompted and you can hear the characters discuss recent revelations or just chew the fat. It's a much-appreciated addition.

Battles gave me a really good first impression. The scripts used for the battle system makes it feel a little different than your average RPG Maker game, and it all adds up to a neat experience. The characters each have a wide variety of skills, and many strategies can be used to secure victory.

For seemingly being a temporary party member, Saoirse is pretty complex, and can use her Optima Shift ability to switch from a fighter, healer, and mage ("Blaster") role. This is really cool, and makes her a great jack of all trades, though I found Blaster the most useful, Fighter moderately useful, and Healer not quite as good as the others (it doesn't help that you already have Ariel already doing the healer thing). There were a few factors that dampened the fun of the battles, however. The encounter rate in the forest is rather high. There aren't a large variety of enemies present, either, which means you'll be fighting the same battles over and over. The battles feel like they could use some tweaking and balancing as well. Enemies can be quite tame if they stick to their regular attack, but they quickly get deadly as they unleash skills or magic. The "Beatle's" regular attack was damaging me around 50 HP, but then its water skill did about 300, six times as much.

How long battles last also varies a lot. You'll either get into battle with a couple of enemies with lower max HP, or just one enemy with a lot of HP that you just have to whittle down. These bigger enemies get to be a hassle after you've already fought them several times.

The enemies could use a little variance in their elemental weaknesses. Daran has several elemental blade attacks and Saoirse, in her Blaster mode, has a range of elemental attacks to choose from, but given the enemies weaknesses, I ended up hearing her yell "Blast of Hellfire" over and over, as fire magic is called for to dispatch the bigger foes.

The boss fight at the end of the demo is, however, quite impressive, and was a whole lot of fun. It really felt big, and had some neat added gameplay details to throw you off guard.

After the battle, however, I got stuck doing a couple of Quick Time Events that, it seems, the fate of the plot rested on me passing. Coming right after a long boss battle, it made things pretty tense, and I'm generally not in favor of using QTEs like this in RPGs (Perhaps in minigames it would be fine, but putting the fate of the plot right after a battle on whether or not you can mash the right buttons under a time-limit isn't cool in my book). The game does allow you to skip the boss battle, which I found extremely odd, until the Quick Time events came along. Perhaps that's why you can skip it, in case you failed the events previously. 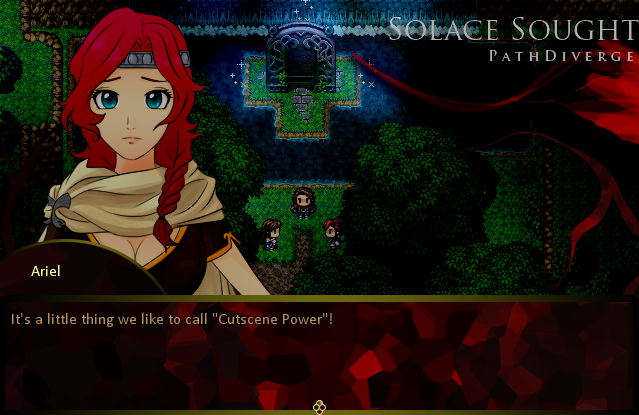 It's a little thing I call unnecessary button-inputting.

As for the exploration part of the demo, things went smoothly for the most part in this area. Items and the sigils you need to collect are spread out nicely. There were a few instances where the way forward is obscured, however. The most egregious example of this was when the title of the quest itself was covering the way forward.

That just leaves the story and the characters. Oddly enough, the biggest problem I had with the story was the parody aspects. Don't get me wrong, I love parodies when they're done well. But I've played (and tried to make) RPG parodies many times, and simply pointing out RPG conventions isn't enough to humor me any more. There has to be more there than just "Wow, looking at RPG mechanics in light of how we do things in the real world sure is strange!" 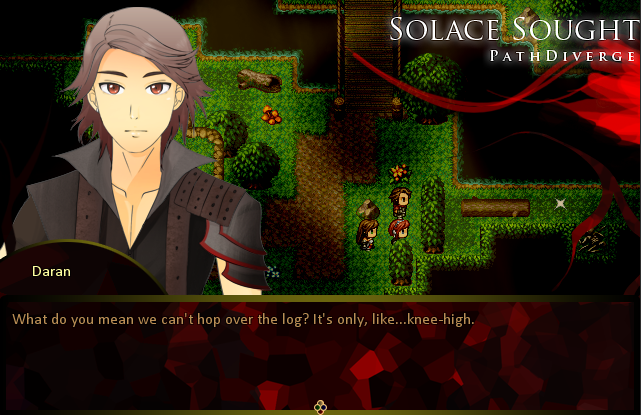 Shouldn't RPG logic should be obvious to you, "Main Protagonist?"

I find that being a little too obvious with the self-references dampens the humor, and a lot of the meta references just didn't tickle me. There's also a blatant Persona 4 reference, which isn't bad on its own, but it's one of those references that will probably take the player out of the game if they don't know what's being referenced. I find that the best way to do references are to ask yourself: if the player doesn't get the reference, will he miss out on something and/or just be left confused? If the answer is yes, then try to do your reference differently. 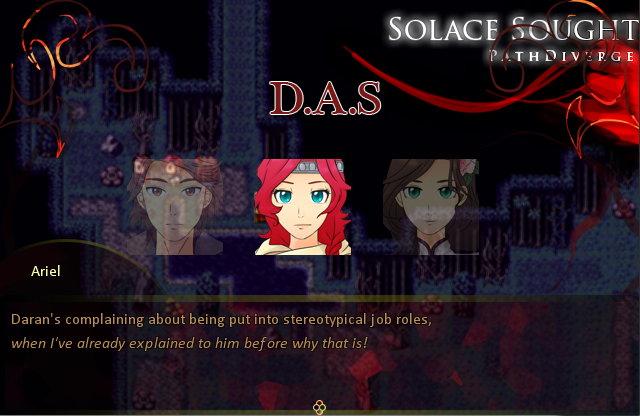 Okay, this conversation was pretty cute.

I may have not really connected as much with the self-referential humor on display, but I still found myself connecting with the characters, as they all grew on me. If the characters continue to be this entertaining, I feel like I can keep playing and enjoying the game long past this point. The plot has a fair amount of story hooks that speak of future intrigue, so there's definitely something to this world.

Overall, while I've been pretty critical of this demo's shortcomings, I still really enjoyed it. It has its rough spots and flaws, but I think it shows a ton of promise. I think if the problem areas are addressed that this will be quite a fine game. And even if the parody elements weren't to my liking, others will probably enjoy them, and they didn't keep me from playing.

Given that this is just a demo, I don't feel right giving it a star rating. If its brought to a complete state, I'd love to come back and give it a re-review. Right now I'm just going to say "Promising with some rough areas that need attention. Very pretty!"