1 reviews
Save to Dropbox
Background

Takes place in a country known as the kingdom. The kingdom is a theocracy ruled by a king who is also the high priest. The main religion in the kingdom worships Armos as the one true god. Armos, however, is just one of eight gods. Armos is the god of man and equality. As such his tenets are against magic and dragons. Armos' hate for dragon's is so strong that he created Dragon Lancers to wipe them out. Dragon Lancers carry around magical artifacts that allow them to capture a dragon's soul.

Jason is a young man who has a nack for causing trouble for himself and everyone around him. His dream is to become a Dragon Lancer. Not being one who would be normally chosen for this elite profession, Jason is forced to challenge the norms. Jason's quest may first seem to only be about defeating a dragon, but it turns into so much more when the temple and the gods start to turn against him. 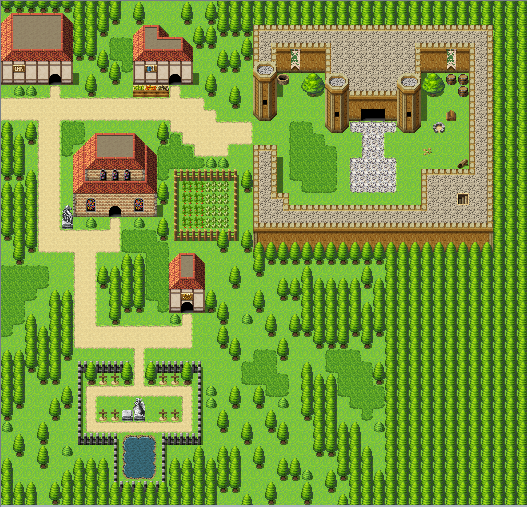 Wonder how committed I can get to go all the way with this?

If there is a problem try to be as specific as possible.
For example, if the its an event, describe the event and
what happened.
Roy
265

Close
01/15/2013 03:43 PM
Interesting game.
The encounter rate is pretty high and it hurts especially while attempting to find your way through the forest...which is confusing and I only found my way through by accident. After beating those plant monsters with Charles, I was killed and unless I missed it, I couldnt find a place to revive and heal in the next town( Yes I am sure it was missed ). Since the hooker stole my money and the game hinted I might steal money from occupied clients I took the money but was killed by the Bounty Hunter ...well, hell I was already dead and poor douche Charles wasnt much of a fight for him.
I had thought a good satisfying screw was going heal me right up, but all it did was remind me of sadder days in the Navy, except not only was I dead broke and robbed but still dead.
Granted I saved just before stealing but had there been a heal before hand I would have been healed and saved then and had the opportunity to fight alongside Le Douche and maybe beat the Bounty Hunter. We were both level 6.
OK....I am through whining.
Sgt M

I just want to point out that there are a LOT of spelling errors, which put a bit of a hamper on the experience. You might want to get those tweaked in the next build.

That aside, it's been enjoyable so far. I'll let you know what I think when I finish it!
kory_toombs

Close
01/16/2013 04:28 AM
You can heal at the Statues of Armos. There are two statues right outside
the temple in Maoyon. You can also buy items from these statues. By the sounds of it you saved in a poor place, right before the Stetlar fight. I may consider disabling the save option for this portion, but evertime I played through it I didn't have any trouble beating him.
+ If you save right before taking the money from the coat then you
won't be screwed. If you saved after taking the money then you will be
screwed.
If I get more complaints about this I'll make an update for this section.
Thankyou for your suggestion.

And if you could give me specifics on the spelling mistakes I would be happy to fix them. It's hard find stuff with all the text I have in the game.
liliford

Close
01/17/2013 12:27 AM
I prefer not to give too much of a hint on how to complete puzzles.
The statue does give you some sort of clue.
I'll let you know one thing: The answer to getting to that switch is in that room somewhere, but you might not be able to "see it."
liliford

Close
01/23/2013 01:43 AM
I've really enjoyed the game so far, especially the unexpected moments of humor. c: Right now, I'm playing the hardest dungeon (the one that is harder than the final boss) and I'm totally stuck in the room that's almost totally black where you have to find a path to the teleport... I've been working on it, wandering around, for about an hour. D: Could I get a hint? Thanks so much for the game!
kory_toombs

Close
01/23/2013 05:27 AM
First, there is an image of this puzzle on the website.
The pathway that enters to the teleport enters from
the backside as you can see.

From the door way that you enter from, the third dark square in,
you should be able to turn left or right. It doesn't
matter which way you go, both directions will take you there.
From there go all the way left or all the all the way right.

There are a couple of different directions on the way to the end,
but this is a good start. Maker sure to push in all directions on
each step to learn all the different pathways if you get stuck.

I had to play through this to get this answer for you since I just
used two different black tilesets to make this puzzle. Good luck.
Annazel
0

Close
01/24/2013 04:53 AM
Played some bits of your game. Numerous grammatical errors and the mapping obviously looks horrid. In spite of that, this game kind of saves itself by have solid, well-balanced gameplay. While it's pretty default-ish, the battles managed to keep my interest because they were moderately challenging (not too hard, but not brainless).

I'd say if you were to go back on this game, you would need to work on the aesthetics. Particularly with music, you almost downplay every plot-driving moment in your game by not having appropriate music to go with it. The intro used the town theme, even though it's supposed to be a "myserious voice" talking into your head. Your worst offense was the fight with the red dragon. A dragon attacking a town calls for music that fits with carnage, danger, excitement, but you KEPT THE TOWN THEME. Another downplay of a climatic moment.

I'd also bring down the encounter rate just by a few steps. Since you have so many splitting paths that lead to dead ends, it's pretty annoying to have to walk back and enter another fight. Also, I'd prefer if the statues that recover health also had an area around them which prevents encounters, because otherwise it defeats the purpose of them being safe havens for the player. If you don't know how to do that, the key is with the region editor. :P

Dragon Lancer was my first game, so it uses the default RPG Maker material.
I found that as I made the game I got better at some aspects. There are some improvements in my mapping and gameplay as the game progresses.

Yes, the encounter rate is pretty high, especially at the start of the game.

I may go back in the future to fix some of this stuff, but I am currently working on my second game. In my second game I'm focusing on using more resources, such as Yanfly Battle Engine, Celianna's tiles, etc... I'm also planning on making the game world for my next game much larger with more dungeons and side quests. And the encounter rate for my first dungeon is 30.
Making a game and receiving criticism is a very important process for improvement.

I hope you enjoy what Dragon Lancer does have to offer and I am open to suggestions you may have about it.
Wyvernjack

Close
02/10/2013 01:24 AM
I just finished Dragon Lancer and it's pretty obvious that this is a first-time game. Like those who commented on the spelling and grammatical mistakes before me, the game's dialogue is rough. The mapping isn't even sub-par. It's like you didn't know how to exactly use the tile-set, which just isn't acceptable.

Pros/Cons:
+ Solid and persistent combat offers a little challenge
- Poor writing that's plagued with spelling and grammatical errors
- Horrid mapping with obvious inexperienced use with the tile-sets (this includes map layout, too)
- Music could have been placed and used better
- Cut-scenes do little to add to the story's atmosphere or even to develop the character's personality further (even though they run smoothly for the most part)

Don't be disheartened, though. All that you need to do is to be more careful when writing your dialogue and to have more experience with the RPG Maker VX ACE tile-sets.
kory_toombs

I'm not easily disheartened and my feelings aren't easily hurt.
Dragon Lancer had a lot of flaws, and I agree with most
of what you said.
Though, to add to what you said, some people liked the
story for its humour. Though I do understand that
I could have developed the story and characters better.
I'm already working on my second game, which is about
30% finished. I'm using a lot from what I learned from
making this game to improve on what I didn't do in
Dragon Lancer.
I hope that when my next game is completed you will give
it a try to see the progress I have made over this one.
Thakyou for taking the time to play Dragon Lancer and
for writing a review.
Wyvernjack

author=kory_toombs
I'm not easily disheartened and my feelings aren't easily hurt.
Dragon Lancer had a lot of flaws, and I agree with most
of what you said.
Though, to add to what you said, some people liked the
story for its humour. Though I do understand that
I could have developed the story and characters better.
I'm already working on my second game, which is about
30% finished. I'm using a lot from what I learned from
making this game to improve on what I didn't do in
Dragon Lancer.
I hope that when my next game is completed you will give
it a try to see the progress I have made over this one.
Thakyou for taking the time to play Dragon Lancer and
for writing a review.

Looking forward to it. :)
shayoko

Close
11/05/2013 12:22 AM
still a decent little game as i remembered it from earlier. the high encounter rates till seems to be a constant. am i right there are no hidden items in any barrels etc? also enemies dont drop items either?
kory_toombs

For example, Dungeon 1 (under the gravestone) was originally set at 10.
It is now set at 25.

Keep in mind the program has some randomness to it, so sometimes it will lengthen or shorten the amount of steps, but the average should always come out to the set of steps set in the map.
Pages: 1