So my buddy old pal rpgmakeraddict has a review in the queue for this (Oh, and this is probably gonna go up before his does since I get automatic review approval for being the queue keeper. Read his when it gets approved, it's good!) and upon reading his review, I was curious to remember what I wrote in my own review a while back. After reading through that, I decided that my judgement of this wasn't entirely fair and that it deserved a more constructive review, at least with less use of some quite mean words like "awful." The game is only 15 minutes long anyway, so it wouldn't be a huge investment of my time to give it another go and see how I feel about it.

On the whole, my criticisms in my previous review hold up, and I will go on to mention most of them here again, but I do have a bit more appreciation for this now. Even though it's flawed and quite nonsensical and cheesy, it's also a lot of fun and nostalgic.

I'll echo my previous review with a similar introduction - the first few minutes of this game start off pretty good. It's not very scary and there are a few of the jump scares that are common in rpg maker horror games like objects suddenly shattering or moving for no reason. That being said, it's also pretty atmospheric, which is actually pretty consistent throughout the game thanks to some decent sound design. The music is very ambient, and it works well. With a poorer choice of which songs to use, the soundtrack could have easily felt overbearing and manipulative, but the soft ambient mood fits perfectly.

Though on the topic of sound design, there is one scream sound effect that gets played a couple times in its latter half that is very ear piercingly loud. I don't wanna say it's used for jump scares, since there isn't anything scary happening in these instances, but it feels like the loud sound is almost meant to be startling, when it was more annoying than anything. And again, while I'm on the topic, there is a game breaking bug near the end due to two missing music files. It wasn't a hard fix as I just copied two tracks in the music folder and renamed them, but having to do that did kill the pace of the game a bit, which really shouldn't be an issue for a 15 minute game that you want to stay invested in for the entire time.

Anyway - back to atmosphere. There's some decent visuals to compliment the sound design aswell, granted the game is a bit too dark. Towards the middle, you see the house again during a flashback, but this time the lighting is brighter. I would have preferred the game consistently stay at this level of light throughout rather than it just being for this scene. It's not too bad in the house, but really becomes apparent once you get to the forest.

The mapping can be a bit of a mixed bag, but isn't nearly as bad as I implied it was in my previous review. Even its more subpar maps get the job done. The biggest offense here is really just some impossibly shaped carpets, but nothing else stands out as distracting. Oh, and Mary's face sprite doesn't really match her character sprite, but it's no biggie. 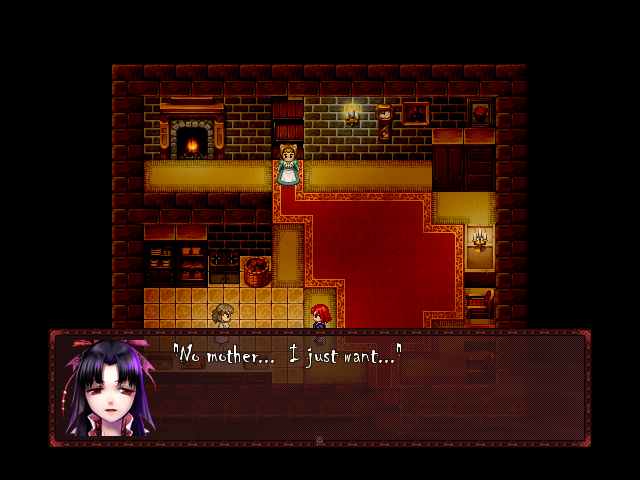 I wish the whole game was lit like this at minimum. Also, the impossibly shaped carpets I'm referring to.


On the whole, though, the presentation and atmosphere works. It's probably the best aspect of the game, so with the good out of the way, let's get to the mediocre next. The gameplay is... there. I have very few problems here. It's basic and gets the job done well enough for the game's length. The diagonal movement is a nice touch. Nothing frustrated me, which is really all you want out of a game this short. Although it is a bit odd that getting the bad ending or good ending is dependent entirely on whether you pick up a completely ordinary bottle outside the final room.

That being said, the puzzles are pretty odd. Although easy, they don't really follow logic very closely. For example, opening a music box unlocks a door. At one point you find a tiny boat that is small enough to carry but also large enough to ride across a lake, somehow. In a game where the writing was more grounded, these would be very distracting, but the story does mirror this.

On that note, the story - probably the most polarizing aspect of this game. This part is hard to talk about without spoilers, so I advise that if what I've said so far has interested you enough to play the game for yourself, then you may want to stop reading beyond this point.

Show
The story is filled with a lot of logical errors and plot holes. As you uncover more of what's going on, it just starts to make less and less sense. Essentially, the protagonist has inexplicable amnesia, and uncovers some stuff about a girl named Mary throughout, who turns out to be her sister? And their mother is evil and trapped Mary's soul? I emphasize the question marks, because most of this isn't made particularly clear.

You never find out what's up with the protag's memories and why she would forget her sister and mother. Even stranger is that the mother has apparently murdered thousands, which I'm sure I don't need to point out is humanly impossible, but she is implied to be a witch or something, so maybe that explains it? But even the mom being a witch is never really explicitly stated or elaborated on. Each of the story's elements feel random and detached without context, I expect primarily because it took tropes from more popular rpg maker horror titles without really understanding what made those tropes work.

The most coherent storyline I can put together for Lamia Nox is that it's about an evil witch who either kidnaps or gives birth to lots of children in order to find the perfect obedient doll who she can have complete control over, but kills them over their imperfections. Apparently she's done this to over thousands of children, with Mary being her latest victim, and the protagonist being her current child. If we assume that she's kidnapping children, the amnesia makes a bit more sense. If she erases their memories and leads them to believe she's their mother, that's kind of coherent, but most of this is me trying to fill in the gaps and not what is actually said in the game. The ideas all work individually, but don't have sufficient context to tie them together in-game.

Edit: Having now read the description for Lamia Nox 2, it does clear things up a tiny bit. As I suspected, the mother doesn’t seem to give birth to the children herself, and in the case of Mary it seems she was adopted. Still, a bit weird not to have this information without the sequel.


On the other hand, despite its flaws, it's certainly entertaining. Even if it's hard to take seriously, that doesn't mean that it's not enjoyable, and the best way I can explain why is to compare it to creepypasta - it's what feels like a homebrew mesh of popular horror tropes put together in a way that doesn't obey the conventions of how these tropes are used by professional writers, which gives it an endearing cheesy vibe. If you're looking for a genuine experience, this certainly won't be for you, but I personally enjoy seeing these fever dreamish mesh of ideas. It reminds me of my own early games, and the dev commented on my previous review that this was indeed their first game, and for what it is, it’s certainly a commendable effort!

Now rexman isn't really an active member of the site, so I don't know if they'll see this, but I do apologize for anything in the previous review that may have come across as too harsh. I hope this is a more fair assessment with more usable feedback for any potential future projects. Which I hope there will be! I don't know what they're up to these days, but I do think it's a shame we never ended up getting any other completed games from them, including the Lamia Nox sequel. As for this game, I would give it an updated three lanterns out of five.