A Game about Looking for your Husband

Intro
Cover Your Eyes is an adventure RPG Maker game with a shooting element. Despite being tagged as a horror game, the game isn't scary at all.

Graphics
The first thing that I noticed is how the game has customized assets for everything. It has a whole city as its setting and you have to explore everything on foot, meaning that there is a lot of mapping involved. However, the game still tries to make every area unique, with or without reusing the same-looking tiles in the process.

Instead of letting you imagine what was happening through a series of text, Cover Your Eyes tries to let you experience all scenes with your eyes. However, it's hard to see the character's expression this way, especially since the game has no portraits in their dialogues. The most that I could see from the characters' faces is their smile, and because the game relies on other expressions in its cutscenes, it hurts immersion in important moments. 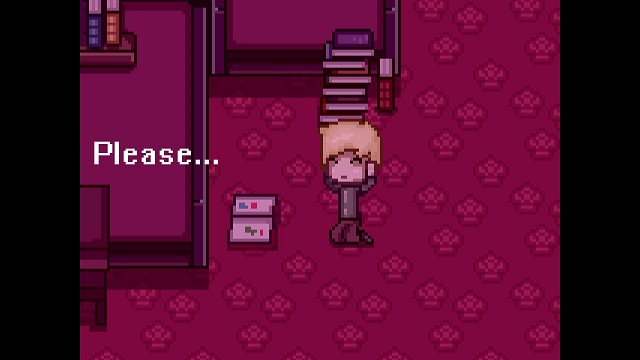 
Story
The way the dialogue was delivered hinders me from understanding the story. The game has a short pause between dialogues before you can advance it, forcing me to wait. It ruined my focus and made me forget some details that were told earlier in the story, and I had to reload my save just to check them.

The shifted focus ruined the storytelling. I liked the spooky vibe at the beginning of the game with the changing images. However, it all went to waste because the game dumped everything and changed its focus into survival, all with a slow-paced plot just to drag out its length. It then tries to shift the focus again with a bizarre element which doesn't work due to how the characters are portrayed. Luckily, the conclusion was cleverly done to wrap all of these, although the game doesn't leave lasting impressions due to the quality of the storytelling.

The lack of emotion might also be one of the reasons why the story doesn't work. I thought of Chloe, the main character, as a merciless, thoughtless individual due to her past, actions, and indifferent way of talking. It was not until at some way through the game that I noticed that it's not how the character is supposed to be portrayed. A lot of important scenes also go to waste because of this since I still couldn't come to terms with the character. 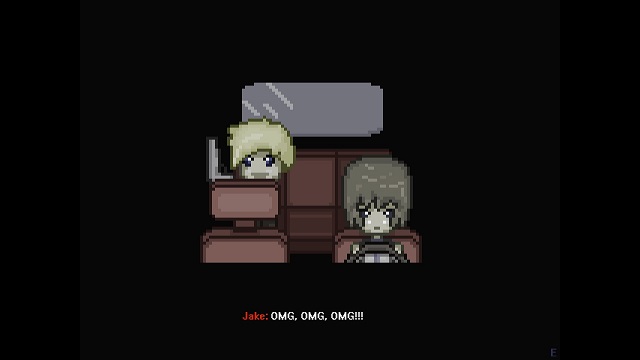 Guess who is the one who looks lively in the game?


The Game
Gameplay
The game feels more like a point-and-click instead of a shooter, except that you are using a keyboard instead of a mouse. The gameplay tends to rely on securing key items to pass through areas besides looting ammo and health packs. This feels repetitive after a while, especially when you have to explore optional areas for supplies. The slow walking speed, huge area coverage, and the limitation of the sprint mechanic don't help either in this regard.

Despite being tagged as an action game, there isn't much that you can do. The game offers some firearms to shoot the enemies, although the limited ammo will make you think twice before shooting. You end up having to dodge the enemies, completely throwing the shooting element off the table unless necessary. The introduction of companions later on also discourages shooting even more since they can do the job without losing ammo - you can even defeat boss fights by just running away and letting your companions take care of it. 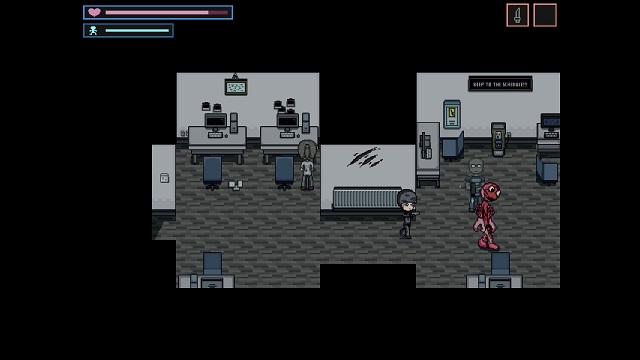 Let me know when you're done. I'll chill by the desk.


The wonky controls also become one of the reasons why you have to refrain from shooting. Despite the game requiring you to use the mouse button to attack, your character can only shoot in 4 directions. This makes it hard to defeat some enemies, especially the fast-paced ones since they can move between tiles quickly. Some luck will be needed to defeat these kinds of enemies without losing HP, forcing you to save-scumming a lot to conserve your health.

Length and Difficulty
The in-game clock states that I finished the game in ~7h with some additional time spent on rereading dialogues and save scumming. The game isn't difficult except for the final boss since you need to attack it despite the game discouraging you to do so throughout the game. You also can get stuck in some parts of the game if you don't know what to do.

Problems
The game never tells the control to switch weapons even though it's crucial in the game. The BGM also tends to be very low compared to the SFX.

Pros:
- A lot of weapons to use
- Various enemies to beat

Cons:
- Character is walking too slow, especially with the limited dash
- Pause between dialogues hurts immersion when reading the story
- The game feels repetitive after you play it for a while

Final Rating: 3/5
Despite the good initial impression, the game lacks a proper follow-up. The build-up for the horror element went to waste because of the shifted focus, while the gameplay is suffering from its repetitiveness. My interest in the game returned when the action scenes and puzzles were introduced at some point, although sadly, the game doesn't seem to offer more of the same quality. It hurts me to say this since I could see the effort that is put into the game, but I didn't enjoy it as much as I thought.

---
Suggestion:
- You might want to map the pause button in a different key from F12 (P, perhaps?).
- Make a confirmation button for when you press exit. I always pressed the escape button by accident when I want to pause.