The city is a war zone, this country gone to hell...

Cover your Eyes if is a game by StarSkipp, and to be precise a survival game.
The game sees us playing as Chloe, the mother of two that is working hard to support her family, since her hotheaded husband Charlie is unemployed and he also seems to have an affair with another woman.
A bad situation, isn't it?
Yeah, but listen to me, it gets really worse!

While Chloe's life is going downhill, some mysterious event hits the city in which she lives, and a horde of various monstrous creatures start moving around the streets. Luckily Chloe is a former police agent, so she doesn't break down in this desperate situation, but she grabs her gun, takes her children and start looking for her husband before heading towards a safe location... if still there is one!

Ok, this is the simple plot of the game, that is a survival horror adventure in which we collect supplies (bullets and healing items) and other items that will be helpful to solve some puzzles that are nothing extremely complex but just finding keys, recovering fuses and placing them where needed, and so on. The whole adventure has a very Resident Evil feel (despite playing as a mom) where combat is more likely avoided to spare bullets for the inavoidable enemies and bosses. 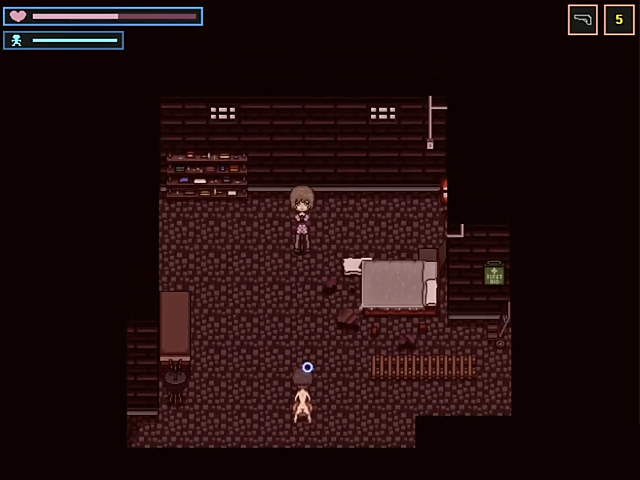 It's just the beginning of the game but I'm ready to kill some kind of abomination! Let's fill of lead this ugly thing!

But wait! Don't start running! Yes, I've said that it's better avoiding enemies than shooting them in the face because there isn't enough ammo for every abomination, but see that green bar under the red health bar? That's the stamina, and unlike what I expected it won't refill after standing still for a while. Nope, you have to use syringes to refill it (the same that are also used to heal), but it is also automatically refilled after a "scene" (Chloe will blink for a second of green to signal this), I mean at the end of a section or level. Yes, this is a linear adventure but there's some freedom to revisit some areas (if you missed them and want to look for supplies).

The game uses a classical 2D view in which we move Chloe. Pressing 1/2/3 you can switch the various items, from weapons to syringes, and these are all used with the mouse button. In particular weapons are unholstered keeping pressed the right button, while the left lets you pull the trigger. But at the same time you have to aim the sight to the enemy, and remember that since the movement is limited to four direction, so is the shooting(even if techically moving the sight with the mouse you can aim everywhere). The sight also changes when on the target, meaning that will cause extra damage... but only if you are also aligned with it, of course!

But, besides gunplay (don't even think to use the dagger, I mean it can be useful but Chloe is rather fragile, and she cannot resist many hits from the creatures!) there are many tasks (some also have a limited time in which they should be completed) needed to survive, including finding the way to unlock some areas solving puzzles that require a particular code, recovering items that will be necessary to progress, and in some cases breaking boxes or locked padlocks with a well placed bullet! This also happens in some concitated moments where for example the opponent cannot be harmed with our weapons, so it's necessary to find another solution... well good luck! 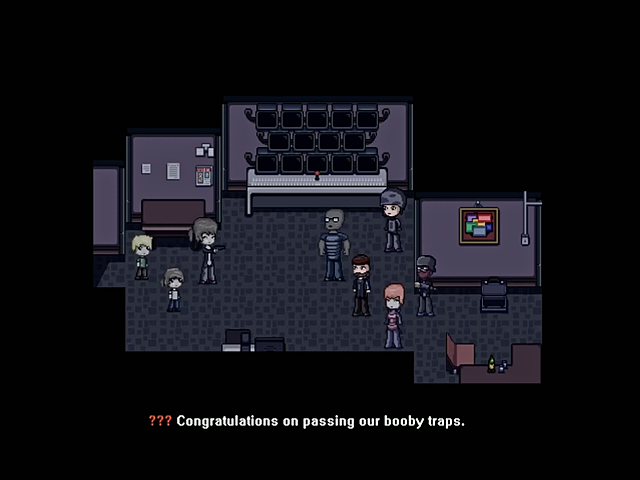 Thanks a lot guys, like I did not have enough dangers to avoid!

This isn't an adventure game, but an arcade survival horror, so don't expect to read long descriptions each time you interact with something. No, the useful items and point of interests are all highlighted by a constant blinking, until you interact with them. The exception are the syringes and boxes of bullets, but they all look identical so I'm sure you will recognize them!

Despite this lack of interactions (not that other survival games had a description for each cupboard or crated examimed, of course!) the world of Cover your Eyes is extremely detailed and visually appealing. Ok, the doomed city is clearly not a pleasant place, it is dark and gloomy, but for example each room of the hotel you will visit is different, each environment is complete of minimal details (often useless, for example you can turn on the TVs but... has no use!). And you will also visit other different locations, a church, a school, a supermarket, a morgue, a... no ok, that's enough or this will become a spoiler!

In the end I liked a lot the unique graphic style of this game and its many particulars! For example see how Chloe squints her eyes when angry or is aiming her weapon, and look how many monsters are present! Ok, most of them have the same behaviour, they roam and do not show particular aggressivity... but there are lots of them from tiny humanoids to grey humanoids, fleshy blobs, mutants, and so on. And then there are the bosses, that are another matter entirely since they provide a good challenge. Luckily you can save each time you interact with a black cat... no wait it's Chloe's black cat that will appear in some (safe) rooms during the adventure. So yes, save points but at least you can save as many times as you want, and the placement is generous, as is the availability of consumables... provided you do not waste them!
Music is also pretty good and well contribuites to the atmosphere of isolation and dread, it's also not too loud and provides a perfect background for this dark story. 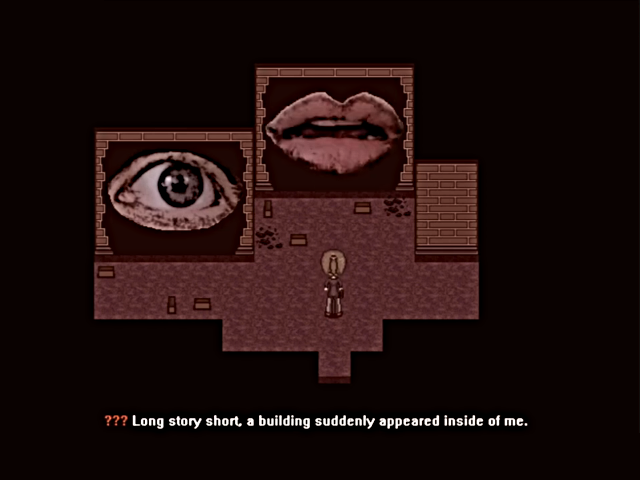 Oooooh pity, well that's really unfortunate! I am so sorry!

Final Verdict
Cover your Eyes is a classic survival horror, anyway it is not the classical zombie horror scenario (let's just say that there are some surreal/supernatural events), and provides an intriguing story and adventure (even if I expected a particular twist in the end but... nope!).
The game has some sequences that break the repetitiveness of the survival horror gameplay (like the running and swimming sections where you just have to avoid monsters or the parts in which you have some side characters helping in some tasks) that is the 90% of the game and you may like or hate.

For the rest I do not mind some typical features like the slow walking speed and the limited stamina (it's enough for the desperate moments, also maps aren't so huge that you need a lot of time to traverse them even if you just walk!) or the lack of interactions and choices. It's a horror adventure and this is exactly what you will get! It may be limited and simple (I would have preferred a more free aiming, but ok it would made the game too easy due to the restricted movement of monsters), but it is good, and in some part it's rather challenging due to a not so tough heroine (final boss was hard, but I did it so it's not impossible at all! And also those mutant babies are really fast and annoying!). But it's part of the style of this genere of games isn't it?

An important reminder! Do NOT to press esc believing to enter the menu because unlike other rpgmaker games there is no menu! Not even an options menu, and doing this will send you directly to the main menu, losing the progress until your last save (I did this by mistake at the end of the long unskippable prologue cutscene... before saving! A terrible mistake, I know).

Ok, so except for the flaws and smlla problems I noted above, I can say this is a well made supernatural survival horror with a distinct tone and style that I liked a lot. It may be slightly repetitive from a gameplay point of view since there aren't many diversions, anyway for the (more or less) 7 hours I needed to complete the game I was compelled to find what was going to happen to Chloe, Charlie and their children. So for me it was a good game! REcommended if you like the genre shooter/survival.

It was definitely challenging and fun to make.

This isn't an adventure game, but an arcade survival horror, so don't expect to read long descriptions each time you interact with something.

Awww I did want to have some internal monologing upon examining some objects but unfortunately what happened was that due to years of messing with the RGSS, I'd unintentionally broken text boxes for dialogue and had to compromise with lots of pictures instead! Did place some readable letters in one or two spots but they ended up not working after a while. It's practically held together with convoluted work arounds.

Cover your Eyes is a classic survival horror, anyway it is not the classical zombie horror scenario (let's just say that there are some surreal/supernatural events), and provides an intriguing story and adventure (even if I expected a particular twist in the end but... nope!).

Ooo what twist did you think? There are a number of occasions where Chloe is questioning her sanity/perception of reality and I was using the "unreliable narrator" trope as an red herring for the player, I am curious if you thought along the same lines?

author=StarSkipp
Ooo what twist did you think? There are a number of occasions where Chloe is questioning her sanity/perception of reality and I was using the "unreliable narrator" trope as an red herring for the player, I am curious if you thought along the same lines?


Show
yes I agree but also I expected a final revelation in which it explained that SHE went insane and killed everyone while the horror scenario was only a creation of her mind to justify what she did.
Ok it would have been too dark of course
StarSkipp

Show
I did have that exact same idea for a non canon bonus scene after the credits. The cutscene revolved around a breaking news report retelling certain events in the game but reframed as Chloe going on a killing spree. Never got around to the idea because I thought it would've been too confusing. Might add it in if I feel inspired enough one day.
TheRpgmakerAddict

Show
I did have that exact same idea for a non canon bonus scene after the credits. The cutscene revolved around a breaking news report retelling certain events in the game but reframed as Chloe going on a killing spree. Never got around to the idea because I thought it would've been too confusing. Might add it in if I feel inspired enough one day.


Show
You won't believe me but I was expecting exactly THIS! And for a second I believed I skipped a post credit scene! I mean there are many weird events, strarting with the bird right in the beginning... but anyway this surprised me because it was not the case!
StarSkipp

Close
11/29/2021 05:13 PM
Show
Aw I was just finally done with updating the game, now I just want to go back in and add it in. I suppose no one would mind though and it would be a really neat way to offer an alternative take on the game. If I were to do it, I'd keep the news report sort of ambiguous and provide reasonable doubt for the audience to speculate if the events actually happened or it was simply a hallucination. I'll send you a video via PM once it's done and see what you think XD
Pages: 1