The humble beginning of every Jrpg ever. But funnier!

Welcome to the review of YEA: Your Everyday Average Game!

YEA is a sort of mini-rpg parody of the typical introductive part of the classic jrpgs, but it also mocks several typical tropes and references of most games.

This time the stars of the game aren't the party members, I'm sorry! The real protagonists are the three narrators or helpers:

- Sasha, the blu haired and serious (or boring) woman that explains the mechanics of the game.
- Margoe, the good natured pink dressed fun loving girl, that is always friendly (and a bit of airhead).
- Raven, the goth girl that will hate you!

The three girls will transform a typical boring introductive scenario into a funny experience, thanks to their commentaries and sometimes even bickering. There aren't a lot of interattive spots and items, but most of them will provoke hilarious dialogues. I suggest you to explore and interact to everything, in order to live the best experience. 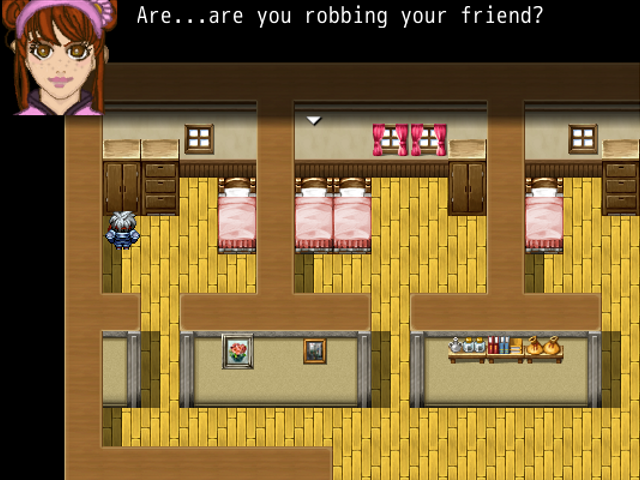 This is d̶i̶s̶a̶p̶p̶o̶i̶n̶t̶e̶d̶... no well, I meant Margoe! I'm sorry, Margoe but I'm free to rob everyone, when the game lets me!

So the dialogues arenpretty great, but how is the rest of the game? In order to keep the three ladies under the spotlight, the setting is one of the most basic ever seems, and adventure itself is just a giant cliché. Despite this, thanks to the lively commentary of the three helpers, the journey will not be boring. In any case mapping is serviceable, and mediocre but on purpouse, still it is not too bad (it's pleasant, with some nice details and surprises). Music, like everything else is Rtp.

Ok, now the bad: the worst part of the game is the final dungeon. The place is very basic and dull, with lots of random encounters in such a small area, that I am sure you will hate them. Monsters aren't too dangerous but they absorb a lot of damage, and even if the three girls will let the party earn an extra level and learn a new skill, it's still a boring part of the game, with no points of interest and lots and lots of random encounters.
Escaping is a possibility against slower enemies, like the undeads, against fast creatures like the bats you probsbly will be forced to fight.
The final boss fight is slightly harder than the other combats, but do not underestimate the final challenge (considering that the gear and equipment are scarce)! 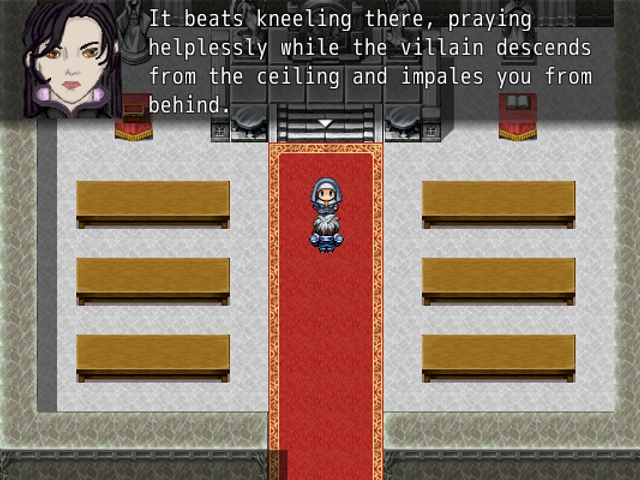 Aaaand... this is Raven! Uh wait, what?? Uhm I think I know what she's referring to!

Final Verdict
In the 30 minutes needed to finish the game I admit I had fun, especially during the city exploration, a bit less during the final (and only) dungeon, but I guess that ideas were almost exhausted.
The interesting detail about this game is that this is not a parody about generic fantasy or jrpg games, but specifically parodies the rpgmaker generic fantasy rtp adventures.

In the end this is a brilliant short (lenght Us perfect for this kind of joke game) and funny parody of the genre. Writing is very good and the characters are likeable and yes, I was entertainment.

Should you play this? YEA, you should try it.