Background
Yamoto Jirou is the second son of the Emperor. Dishonored several years ago, Jirou was exiled and branded as a disgrace to the family. He spent his intervening years traveling through other kingdoms, learning what he could and helping the downtrodden. Feeling himself ready, Jirou returns to his home country to present himself for his father's approval.

Gameplay
The quintessential “hero” unit that does a little bit of everything. Jirou is implemented as a hybrid attacker, capable of dealing physical, magical, and heavenly damage; as well as having a myriad of support spells. While he can’t outright tank, he can be difficult to kill.

Sample Skills
Dragon’s Claw - An ancient weapon technique. Deals 50 heavenly damage plus 140% of Jirou’s ATK and MGC. Unaffected by defenses.
Coursing Tide - Jirou summons surges of water, dealing 60% of his AGI as magic damage to all foes plus 2% of his current MP for each MGC he has. Background
The white camelia flower signifies “waiting,” just like the Dread Witch is willing to do before the inevitable ruin of her foes. She is a patient seer and wealthy noble from central Yamoto, and an ally to Jirou before his disgrace. Now, she helps him travel back to the palace, freely offering her wisdom and magic.

Gameplay
A destructive, powerful magic-based nuker. Inconsistent with her damage, Camelia is at her best when it’s do or die: her resources are tight and her costs are high. Choosing the right time to unleash hell is the key to using her effectively. When she disregards mana, Camelia can destroy everything in her path. Background
Camelia's faithful bodyguard. He is an adaptable, playful guy, but will tolerate no threat to his charge's well-being. Others might believe that he should be more servile and humble, but he and Camelia get along very well without being particularly fancy.

Gameplay
Etsuo blends the defensive powers of a tank with consistent damage. He can focus on either magic or his attacks, depending on the situation at hand. He’s spry and enjoys a solid amount of evasion to compliment his armor. Etsuo is very resource-intensive and has to build inefficiently, focusing on many stats at once. Etsuo can’t stack one stat without forsaking half of his skills and losing much of his usefulness.

Sample Skills
Critical Charge - Etsuo focuses his blade’s edge. He gains 40% critical chance for three turns.
Multi-Strike - Etsuo darts through the battlefield with vigor. He heals himself for 60% of his MGC and performs his basic attack on each present enemy. Background
Ren is the only child of a minor noble family. Raised straight-laced and proper, Ren fancies himself the common peoples' defender. Pursuing his eventual goal of becoming an Imperial enforcer, he takes it upon himself to accompany Jirou on his travels, hoping to put himself in good graces with royalty.

Gameplay
A powerful tank and consistent, if mediocre, dealer of damage. Ren ensures the livelihood of frailer allies. Ren is capable enough of holding his own in a straight duel, but his playstyle is not for the impatient. Ren can lean offensively, attracting enemy attention and paying back their attacks; or defensively, supporting allies with resource heals and buffs. Background
A young member of the Fukui clan. The Fukui reside in the neighboring Mōkin kingdoms, where they are a prominent noble family in the political world. Faith herself is descended from an arm of the family that settled down in the Yamato Kingdoms some time ago. As an incredibly young Inquisitor, her upbringing has been strict and her tutoring exceptional. She hasn't the people skills of most nobles, and tends to be very blunt when addressing others.

Gameplay
A powerful utility nuker whose spells do decent damage and ease the fight for her allies. She can tenderize foes at the start of battles, neuter weakened foes, and mark victims for death. Mana is her plaything - her limits are derived from TP. Her best moments are found when taking on multiple foes; she can devastate swaths of opponents better than anyone else. Background
Katsu has done his best to avoid a troubled past, and yet a demon has managed to cling to him -- literally. Although his betrayal of the honorable shugenja way brings out the ire in some, he finds camaraderie within the ranks of Jirou's entourage. He has a good heart and has put his faith in the prince. Katsu has a severe propensity for snark, and will not hesitate to criticize somebody in the wrong.

Gameplay
Katsu attacks many facets of his foes at the same time. He cuts their stats down while dealing fair amounts of magical damage. The weaker his foes become, the more damage his spells deal! Katsu’s spells derive additional power from his foes’ lost stats, making him extremely powerful in long, protracted fights.

Sample Skills
Morbid Whim - Katsu casts dark energy that deals 50 + 100% of his MGC damage to a target. Each dead enemy raises the damage 40%.
Deep Slumber - Katsu deals 50 magic damage plus 120% of his MGC to an enemy and puts them to sleep, making them unable to act. If any foes are currently asleep, they are damaged as well. Background
The glorious hero of Ryūhō, celebrated by the Emperor for his skill as a general despite the lack of any true warring in his lifetime. He's still young and vivacious, but also a loyal subject who understands the chain of command. That obedience is what took him from a hunter of rogue shugenja and turned him into the military man that he is today.

Gameplay
Oushi has a unique mechanic with his TP: his abilities gain damage equal to it, and he is fully healed once it hits 100. (It then resets back to 0.) This makes him value both his normal attack, in order to build up TP, as well as his spells that let him exert his built-up energy. He is primarily a user of ATK, but also makes good use of defensive items to help him protect the party. Background
Daughter of the famous Akiyama Kenta, the Shogun's Blade, Akane inherited much of her father's battle prowess. She is rash and blunt as opposed to acting like a noble. Despite that, Akane is a passionate and intense friend once she decides you're worthwhile (even if that's usually a snap judgement on her part).

Gameplay
Akane is a powerful, offensive bruiser with the most hits of any character. She demolishes foes with her fists. Akane will need help with TP from a friend or items if she is to really shine. Like Katsu, she excels at diminishing the enemy’s stats.

Sample Skills
Focused Hand - Akane prepares to strike. She has 250% ATK for her next action.
Primal Fist - Akane tears into a weakened target. Deals 40 physical damage plus 130% of her ATK and 10% of the target’s missing HP.

Thats because they are.
I believe these are ripped out from pokemon conquest.
Travio

Thats because they are.
I believe these are ripped out from pokemon conquest.

Dyntasy Warriors is circa 200 CE China.
These images, from Pokemon Conquest, are from a circa 1600 Japan. Etsuo is Date Masamune - possibly one of the coolest adaptations of characters in history. Just the very fact that they're using an image of him makes me at least want to try this. <_<
Craze

Close
02/15/2013 05:47 PM
Heh! Yup, they're from PokeConquest which is published by Koei, using their interpretation of the Japanese Warring States Period (aka "Samurai Warriors"). 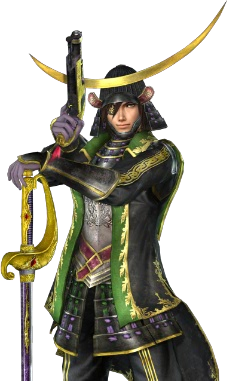 Close
02/15/2013 05:52 PM
Awww, no use of Ii Naomasa? ;_; Sorry, I'm a bit of a nerd for that time period, especially with all the amusing adaptations that roll out of it. (Sengoku Basara was the greatest series ever. <3)
GreatRedSpirit

Close
02/15/2013 06:06 PM
Naomasa isn't in any X-Warrior game yet. Hell Ieyasu nor Hideyoshi weren't even playable in the original Samurai Warriors. Tadakatsu is the #1 Tokugawa officer iirc, and he came in Samurai Warriors XL. It's like Cheng Pu, Han Dang is in for DW8 but Cheng Pu is still out in the cold, stuck as a generic officer.
Travio

(Fun fact: I know little to nothing about the history or SW franchise. That's all LouisCyphre. I've played ~ten hours of Pokemon Conquest but that's it.)
Travio

Ahhh, I had assumed it was just SW caricatures. Looking at him... I wish they used him as he appeared in Funny Hat Convention History Game Kessen though.
d_a_renoir