Hello
welcome to the review of Dragon's Descendants, another game somewhat related to dragons, like the last one I played and reviewed, but this is a real jrpg and not an adventure game. But it's not your usual fantasy game that takes inspiration from the various final fantasies, Romancing Saga or similar, because it's a game set in feudal japan! Well ok, sort of it since it's a fantasy version of feudal japan, still it's a particular and uncommon setting!

In Dragon Descendants we play as Yamoto Jirou, a dishonored samurai that is going back home after being exiled. After a loooong pilgrimage visiting various kingdoms he is going to see his father, but the journey won't be easy at all! Luckily Jirou is a resourceful warrior: he can attack and deliver physical and magical damage, heal, and later even revive fallen party members. He is also a charismatic individual but he won't be able to survive the journey without the companions he will meet.

These are Camelia the Witch, a classical mage with destructive spells, her bodyguard Etsuo that is a versatile tank and damage dealer, and Ren the Guardian, another samurai with emphasis on both defense and attack. This will be the first party, but later some other companions will join these travellers, but I admit that I was more than happy with these four and I used them for most battles!
Characters will also learn more skills as the game progressed (after some events, every dungeon is a sort of chapter of the story), and the game is rather combat intensive due to the random encounters, still you can save everywhere and flee anytime from combat. Ok, you can't escape from boss, but at least there will be a save point (even if yeah, you can save anytime except on the main map!) to tell you that things are going to get difficult, AND the party will be also full healed right before each bossfight! (so don't worry, and don't waste supplies!). 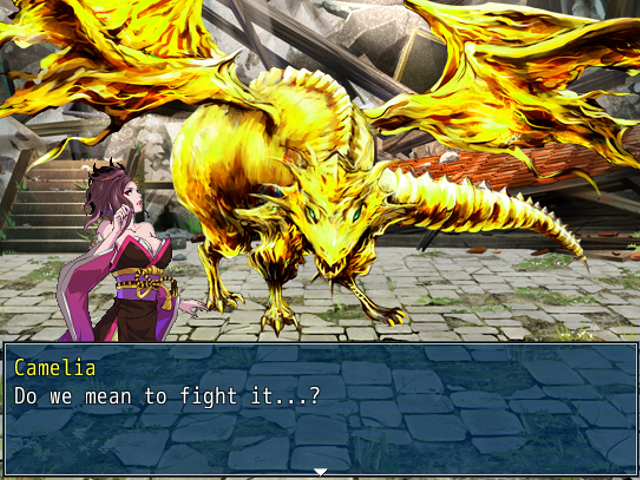 He looks mean but yeah, we mean to fight it. This game is called Dragon's Descendants so there are dragons. Oh yeah, this is just the first one in fact!

Anyway combat is fun and challenging: expect to learn how to use your character effectively since they will have four diverse skills each (that use both TP and MP) and unlock many more (that's why I used almost always the same!), and most of them are rather versatile. For examples many times I was unsure to risk a powerful attack or instead to heal and be more cautiou, and this is because in this game there is not "the fighter" and "the healer" like in many other games, but each character has his or her own particular skills.
While this may sounds complicated (and it is if you are expecting just to spam always the same powerful moves) I think that makes the game really fun, and when you are tired of the random combat encounters(it happened to me when I had to look for some items on a certain map and fighting was becoming a bit boring) you can just run away (and spare some useful consumables for later use).

Maps are adequate and not too big, the dungeons aren't bad but they are just the locations of the quests and nothing more, so don't expect special interactions or descriptions for the various items, just some chests with loot besides the objective(s). Also random encounters of course! Oh and be prepared because some maps have some obstacles like the poisoned water in the swamps... so take your precautions before venturing forth!

Oh yeah, since I spoke of the poisoned water, the game offers more than one item that can immunize your party members from that damage, but mind that all the party (even the reserves NOT assigned to the battle roster) will be affected from this harmful effects. So items are useful and not just in this case: you will find many accessories to increase some stats or capable to gift the character of some bonuses like immunities from some damage sources or mana regeneration. Neat! Anyway this is not the game where you need to upgrade your weapons to survive, oh no, weapons cannot even be unequipped! Oh clearly you can also buy consumables and healing items, BUT remember to sell the looted items at the roadside shops (that looks like little flames).

Graphically the game is good, depsite the use of rtp there are also some custom sprites and the portraits taken from Pokemon Conquest fit perfectly the game setting, recreating a distinct oriental-fantasy setting and giving character to the various party members (and secondary characters) with their different poses.
The dialogues are well written, this is a linear game so do not expect choices or different paths, anyway it's all really polished and stylish. I liked a lot the enemy sprites for example, that fit the game setting and contribuite to the whole atmosphere also enforced by a really good music selection. 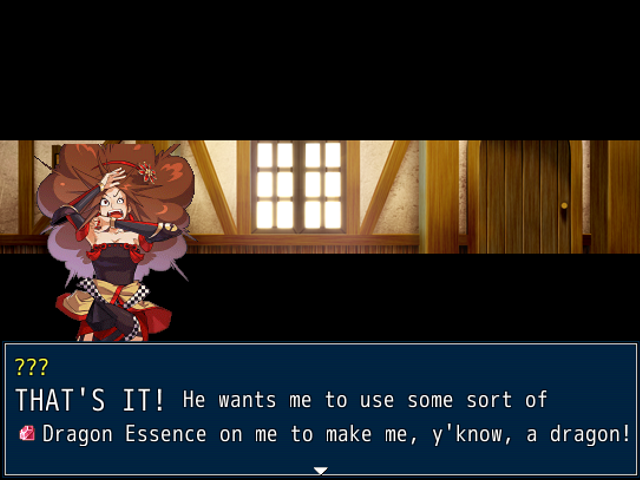 Ok, looks like that in this game people are totally OBSESSED with dragons!

Final Verdict
Dragon's Descendants is a linear but well made adventure jrpg with a complex but interesting combat. This game is really polished and fun to play, characters are likeable and the resources used make this game stand out from many other jrpgs that start from a similar concept, the journey of the hero and the encounters along the way (I don't want to spoil the story, but obviously it has something to do with fighting dragons, of course!). The only problem may be on the simplicity of the maps, for the use of random encounters and for the linearity and lack of interactivity. Stll this is a game where I found no errors or problem, really stylish and that may appeal a lot some players. A goog game, 4/5, try it if you can!

Close
05/06/2021 12:48 AM
Thanks for the review, and glad you liked it! Was pretty surprising to get a review for a game this old! I did enjoy writing this, so also glad you liked that specifically. I passed it on to Lou who also appreciates the review.
TheRpgmakerAddict

author=Craze
Thanks for the review, and glad you liked it! Was pretty surprising to get a review for a game this old! I did enjoy writing this, so also glad you liked that specifically. I passed it on to Lou who also appreciates the review.

Yeah, I admit I found this game quite some time ago, anyway that has such a particular system and stylish appearance that seemed quite recent (and modern) to me. Well done!
Pages: 1