Ever had a hangover? Yep, me too. Ever had a really bad hangover that feels like you've been transported to a different reality where everything is just a little out of focus and the universe is really loud? Yep, me too. Every had a hangover so bad it warps the space time continuum and drops you into another dimension where the inhabitants are sentient bipedal lemons and the air is so toxic it will kill you after 30 minutes of exposure? No, I can't say I have. If you haven't either then you get to experience that reality in this game. If you have drop me a line and let me know what you were drinking.

This game is as silly as it sounds, but that's pretty reasonable. It was made for the Ace light cook-off, an event to celebrate the release of VX Ace back in 2013. There were no restrictions other than the ones inherent in the light version of Ace and the fact that the game had to be completed within the two and a half week time frame of the event. It was basically no holds barred, well other than don't cheat and add in a script workaround, since they are disabled in Ace Light.

So with a cut down version and a strict timeframe what do you get for your nickel? Frustration is the most obvious word that springs to mind. The premise is somewhat amusing, Aaron, our protagonist finds himself in the toxic (to humans at least) land of legend known as Lemography, after a night of high alcohol consumption. The snarky voice in his head lets him know he's got 30 minutes to race through the landscape, find 4 crystals, emblems and get them back to the shrine where he woke up or he's going to end up pushing up the out of focus daisies. 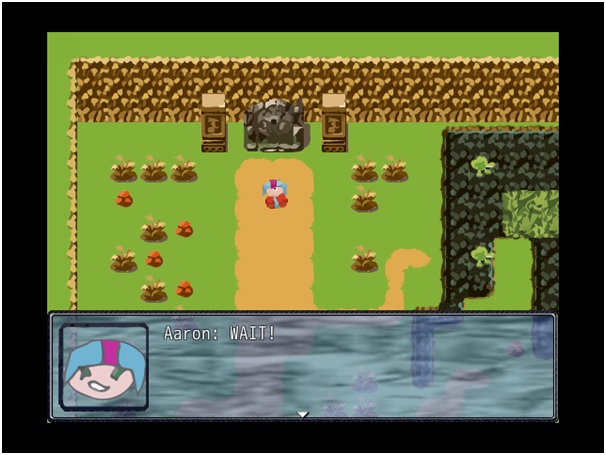 So the countdown starts ticking over in the corner as you head out to explore this blurry world and you run into the main cause of frustration in the game, the battles. They're not anything to write home about being the standard front view turn based that you have to have in the light version, but they happen on average every 5 steps, I'm not kidding. I have no idea what the encounter rate is set to but its way too high. In addition that nasty timer in the corner keeps counting down whilst you are battling which means you pretty much just button mash as you don't have time for the luxury of devising a strategy, not that you have any skills this early on anyway, but the worst of this bad lot is the fact that at least two of the custom enemies you face spam confusion attacks, and since you are travelling on your own once you get hit, and you do get hit a lot, you may as well just walk away until the battle is done as there is nothing you can do.

As you can guess the grind factor in this area is through the roof which does lead to you gaining a double handful of levels by the time you've made it from one side of the small map to the other if you take the time to check out the three possible paths and the dire warnings about recommended levels on two of them. There is a slight concession to the tedium that is the battles in that you fully heal after each battle, but then you would have to as you have no healing items or spells that can restore your health as you travel. 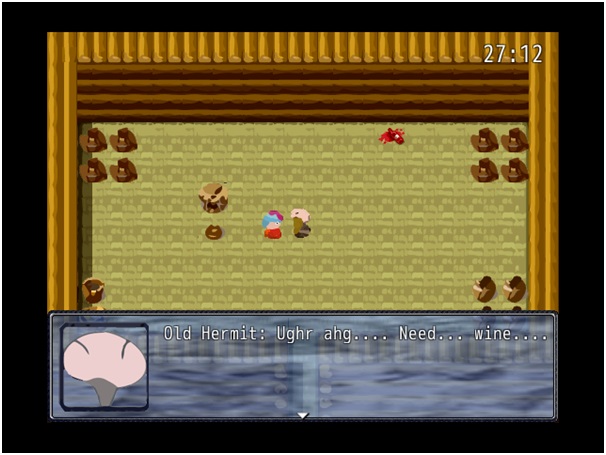 Aaron, this is your future.

You find your first emblem in the home of a old drunk hermit who has mislaid his bottle of booze, returning it to him without giving in to temptation and drinking it nets you the East element and it's back out into the indistinct grind fest to repeat the procedure as you battle your way to the next emblem hunting ground. Given the countdown clock sitting ominously in the corner you tend to rush through all the dialogue with the characters you meet, which means if there is some amusing comment or moment you tend to miss them. I do appreciate the dynamic of a limited time frame, but given you know you are going to be spending so much time in battles you find yourself cutting corners in other areas of interaction and it is a detriment to the game.

I will make a quick note about the graphics, the character sprites and face sets are all hand drawn, and done in a very rough and raw fashion, but that is very much in keeping with the idea that you are suffering from the DT's and don't actually want to focus too closely on your surroundings. The RTP tileset has been modified in a similar fashion to remove the distinguishing features and makes everything look blurry and out of focus. It's a distinctive look and I appreciate the effort that has gone into creating it as it aids in the sense of immersion for our poor hapless drunkard.

So after grinding your way through 20 levels or so, and running into a strange character by the name of Uncle Munkle Jone on a couple of occasions, you show your tattoo-less buttocks to the King of the Lemon People, and act which he deems valiant. It's a good thing you fail to mention you've just finished robbing the rotting corpse of one of his subjects currently residing at the base of one of the two holes you fall down in this game. What he doesn't know won't hurt him. Still you finally gather all of the required emblems to take you home and after another slog through the misnamed three way pass (because there are four ways to go) you head to the shrine and a very odd ending. It seems that irrespective of your efforts you are going to be staying in Lemography a while longer, a long while longer.

Escape Lemography is an average game made in a short timeframe that is seriously let down by its balance issues and a little disappointing in the use of some of the graphical elements, most especially the blandness of the maps and interior spaces, though the hand-drawn sprites are a counterpoint and highlight. I wouldn't really recommend it unless you are perhaps hung-over and want to feel like you aren't the only one.

e: Though that doesn't mean you shouldn't review it yourself if you feel like it.