Reaper is a short adventure game recounting the story of Emi and her younger sibling May. An undisclosed time before the opening of this game the sisters had lost their parents and now May, once healthy and robust is apparently suffering from an affliction that baffles the doctors and is slowly draining her of life and strength. Determined not to lose the only member of her family she has left Emi is unwavering in her resolution to take on Death, or t least his anthropomorphic personification the Grim Reaper and ensure her sister's survival, no matter the cost.

The game opens in the hospital room with Emi attending to her dying sister, trying desperately to hold her to life even as it slips away. One of the things that strikes you from the opening is the lack of music, the moments that the two siblings share isn't cluttered with musical accompaniment, it is cast in silence. I'm not sure if that was a mistake on the part of the developer or if it was a deliberate choice, but for some reason the starkness of the silence and the pain in the scene goes together well to encapsulate the loss.

Another thing that aids in this immersion is the beautifully drawn visuals. The actual tile sets and sprites are all the RTP and used with a good degree of skill, especially in the latter more fraught sections, but the cut scene images and the busts are these lovely drawn set pieces and they capture the mood exceptionally well. 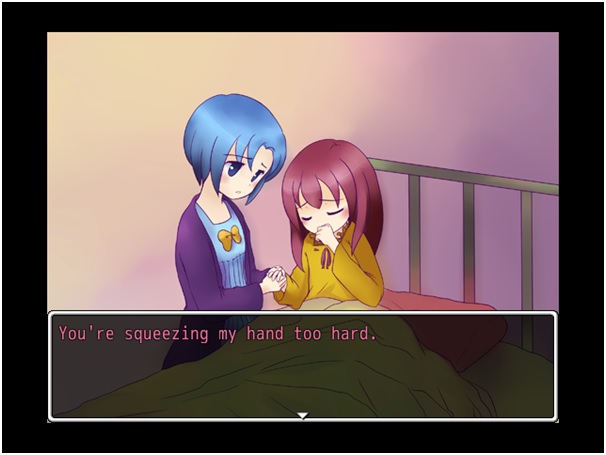 Hold on, little one.

Into this gently portrayed but still heartfelt scene steps the Reaper. There appears to be no malice in him, in fact his comments to the dying girl are that it is kind of her sister to stay with her until the end, but the that time has arrived and she must go, however Emi is having none of it. Without warning and indeed in a completely unexpected move she shoves the Reaper away from her sister and across the room into a wall. This justifiably perplexes Death who should not only only be seen by those he has come to collect, but should not be able to be touched by anyone. Whilst he is recovering from the shock of contact, Emi picks up his scythe from the foot of her sister's bed, and it accepts her, things understandably go rapidly downhill from this point.

Now the game shifts focus, as Emi finds herself in a simulacrum of her home, but it is populated by Death and his minions and he is on a mission to reclaim his scythe and with it some portion of his power that has slipped beyond his control. If he was a reasonable being before he is not one now. There is a quick tutorial in regard to controls which are non-standard RPG Maker responses. D accesses a save screen, A equips and unequips the scythe, though I have no idea why you would want to have it unequipped, and S access your item menu which is empty until you pick something up. Though Shift to dash is the same, but it does come with a price. For such a short game, and using the Ace Lite version there is a lot of extra detail included, when accessing the menu Emi's full length portrait changes depending on whether or not the scythe is equipped, and indeed so is the character sprite shown in the save menu, almost everything n the game is interactive to a greater or lesser degree and the responses you get are relevant to the stage of the game. Before the incident in the sick room everything was pristine and ordered, a bunch of flowers gave that response, afterward the response is that the vase is destroyed. That level of detail in very much appreciated and makes exploration a fun and at times enlightening experience. Though given that this 'home' is a replica a lot of the things you would interact with, doors, windows etc are actually just painted on to the walls, they aren't functioning, simply there for show. It adds to the dissociated feeling of the game at this point, the idea that what you are experiencing cannot possibly be real. Music has also been added into this section, unfortunately it is a little out of place, it has some otherworldly overtones, but more in a fairies at the bottom of the garden vibe than I may be in the anteroom of Death's domain mood. Though the continued silence would have been worse, as it really wouldn't have fit at all.

So Emi, armed with the Reaper's scythe and on the hunt for her now possible deceased, possibly in limbo sister sets out through the halls that are both familiar and alien. Along the way she runs across two different forms of minions, those that look like miniature versions of their master, grey shrouded and menacing which will kill her if they touch her, instadeath, not one of my most favourite game over scenarios, so they have to be dodged or outrun, and black floating spectres that are susceptible to the scythe in face to face combat and can be killed. There is no actual combat in the game, or at least no player controlled combat, you either die at the hands of the grey robes or leap out and mow down the black spectres instantly. Which is why it is a good reason to almost never unequp the thing. Though you later learn there is a way to take down the grey robes, it just takes a bit of timing.

In addition to the minions, Death himself is hunting you down and when you finally discover the item that will allow you to reach your sister in the place she is held he appears to chase you. This chase scene happens in a sort of purple hued netherworld, not in the house facsimile in which you normal move, just to add another layer of unreality to the scene.

Even with a sequence like that the feeling of dread is much muted; this is an adventure game, not a horror. It's meant to portray a simple but heartfelt story and it does it with a certain level of aplomb that I cannot help but admire. Eventually through more trial than error Emi discovers a way that she might be able to save her sister, though doing so will pit her against the denizens of this place and ultimately against Death himself. But she is nothing of not determined and sets herself on a path for which there is really only two destinations; Victory or Death in all senses of the word. It can't be that easy.

There are a few errors evident in the game, some of the item dialogue repeats itself at random moments, as well as some of the sound effects, most notably when you look down the attic hole into the room below, however there were no spelling errors and very few grammatical ones so overall the issues in that regard did not detract from the game.

The very end of the game will require some fast finger work and can get a little annoying and definitely suffers from a lack of focus by the developers, though they have admitted to that on the gamepage. The end of the game does become a little farcical and not actually in keeping with the more sombre mood of the earlier section, but it still presented something of a challenge and did up the tension a little so the complaint in not a heavy one. But by the end of it I really was looking forward to giving Death back his scythe, pointy end first. Though I do wish the final scene was a little less ambiguous and open to interpretation.

Still for a game developed for the Ace Light cook-off and completed in around two weeks, this is a enjoyable game with a good and interesting story and enough character development and pathos to see it through to the end. The developers have stated that they are looking at a remake to include some of their original vision, and if that happens I will very much look forward to playing it again.