Hello and welcome to an adventure where... oh yeah I've already said that in the title, ok!
Wandering Brawler is a game by Richter_h, made with RPG Maker VX in 2013, at least that's the last version available, and well it's not complete, but at least there is a lot to do and enjoy. I like reviewing games that even if aren't 100% complete have something interesting that makes them stand out. And this is the case!

Apparently the game focuses on a larger series of game, the Westerland (this is in fact called Westerland Story and is part of the realm of Mediterania) and is about a man named Vent McGraves. This guy is, unsurprisingly, a brawler, that after the death of his master starts wandering to find the hidden village of Corona, a new master for himself and gain new skills. During a tumultuous night in a tavern he meets a mysterious (and gluttunous) girl, Ryuna that will join him in his travels. And then the adventure begins! 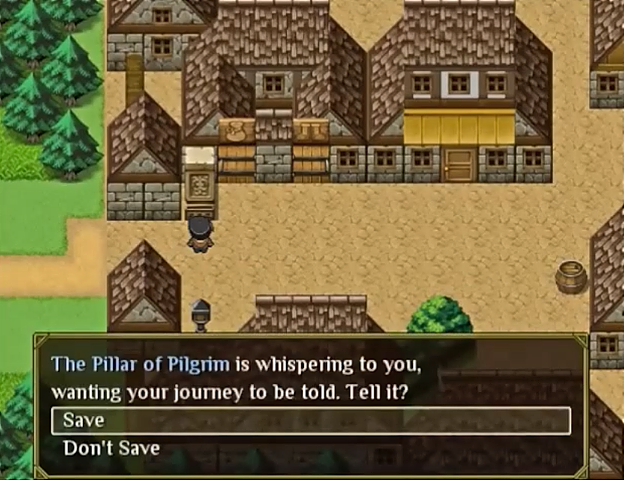 Remember to save at the pillars! Very important! One in each town!

No, well to tell the truth the adventure begins before, with a couple of tutorial battles in which we will learn to use some of the characters' skills (others will instead be introduced later, like Ryuna's ability to damage ghosts, something that ordinary people like Vent cannot do without magical items) and the battle system that doesn't just require strategy but also good timing when pressing the keys associated to the various moves. Nice idea! In the beginning you can also ask for a sword, that while isn't a weapon typical of a brawler (you will find also the more appropriated knuckle dusters) it will provide a good ege for the first encounters, and also the necklace that lets Ryuna heal the team (even if for few hitpoints, but hey it's better than nothing!) will be handy. Well yes, Ryuna is more versatile character while Vent is the usual badass fighter, anyway trust me you will need all the help you can find because game is really challenging!

The lide of a wandering brawler isn't an easy one: you will never have a lot of money or loot, and the wilderness is a place where random encounters are frequent... maybe too frequent! Enemies are tough and consumable are scarce, those who can poison you are also really annoying! Luckily you can always escape from combat, and that's a good thing since you won't get lots of experience points from those wandering encounters, so pick your fights (because you can ONLY saves at the pillars in towns!). And learn how to use each skill and master the combat system, because the first boss will be tough, trust me!

The game is an adventure game abour travelling the wilderness, facing dangers and fighting opponents, of course! It's a simple story but it works well, at least this isn't the usual story of the party that loots a dungeon or the predestined hero that has to fight the King of the Demons. Not at all!

Visually the game is pleasant, mapping is pretty good even if pretty often simple and minimalist, but I liked the tiny towns since you will immediately find the shops you need, without needing to travel a lot. Well these are small villages, not cities, so I do not mind the lack of peasants. What instead I liked very much where the battle arenas where we use the battle system, that have a nice isometric look and are very pretty! Good choice! For the rest there isn't much to say, there are no portraits but charsets are nice. Tilesets are a mix of Rtps and also some are custom, in any case even if from a visual and also music aspect the game doesn't really stand out, it's original enough not to look as a usual bland Rtp jrpg, because it isn't! 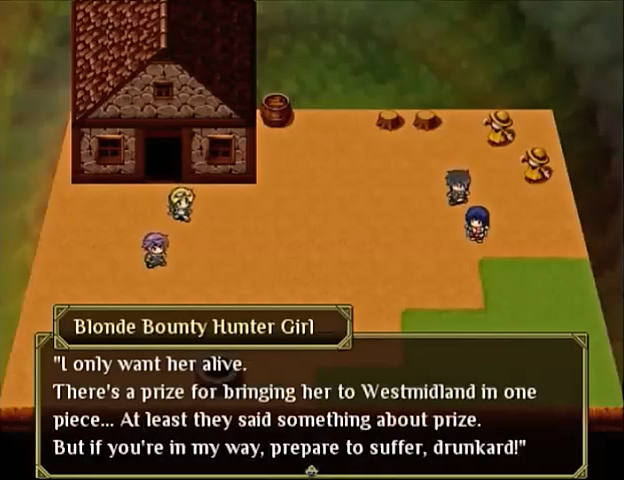 Drunkard? DRUNKARD??? You may be a girl but I will hit your pretty face if you keep insulting respectable brawlers!

Final Verdict
Ok, Wandering Brawler is an incomplete game but it's pretty interesting to try and play: it's not a usual high fantasy rpg, on the contrary it's a really low-magic, low-fantasy adventure. Those who like challenging games and also quick time events (and do not hate random encounters and the limitation of save points!) will probably like it a lot more than those who are looking for a more usual rpgmaker experience, anyway this game has its appeal. Story and characters are interesting and while some parts would be perfected, I still think that this game had potential and was really inspired. Not bad at all!