Play this and you won't be grumpy

Hello. After various games and adventures of different kind, let's go back to the fantasy lands and play a traditional classic jrpg.
Well yes, but actually no! Because "The grumpy knight (and the crisis in Helena's kingdom)" is a fantasy game with many unusual features!

Ok first you have to select the difficulty: the Normal option will let you enjoy the story and offer a rather easy challenge (up to the final boss that will be pretty difficult even at normal difficulty) or if you want a hard time choose difficult, in any case you can change your mind (and the difficulty) at any time! Oh but remember that the party is automatically healed after each combat and you can also save anytime and anywhere!

But what are these unique features I was talking about? Well first there are no experience points, you can level up all your characters just talking to the queen in the throne room after winning a boss encounter. In the same room you will receive other benefits like the access to the treasure room and the possibility to buy new swords for Elsa, our blacknight protagonist. 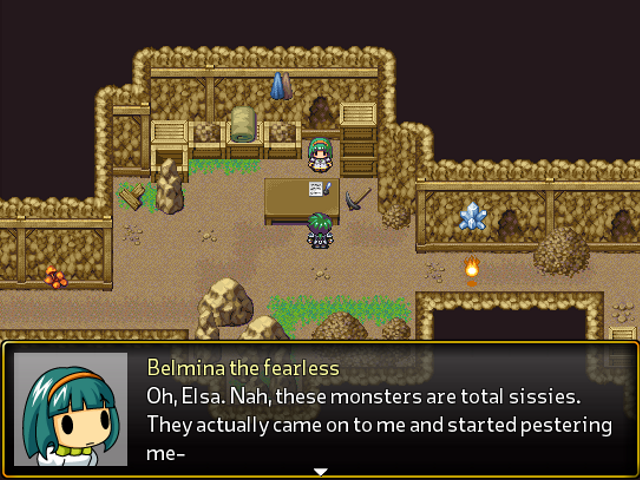 Anyway our grumpy protagonist is just the first of the playable characters: there are ten and, second interesting feature, each one has some particular gimmicks (that increase and improve earning levels, of course). For example the prince can summon various servants to protect allies or restock consumables, the gardener can plant a tree that quickly grows and may be sacrified to heal or damage the opponent. The princess can issue orders the cause various effects, the cook uses food and esplosive, and so on. Each one is useful and different (my favourite party was Elsa + uncle + princess + gardener, but I swapped the gardener with the battle priest for the last battle), and they can also be renamed (I did that so I did not use the name). Despite being all optional they have funny dialogues and are masterfully characterized and detailed in few occasions. Finally there is no gear management: Elsa may equip various kind of swords and rings, and every character can equip some items that confer different bonuses (to some characteristics), nothing more. Yeah it's a simple game!

But not only the characters, but also the opponents are interesting: the slime monster will turn your characters into other slimes (they lose their powers but they get the slime's same abilities), the undead drsgon may eat your characters removing them from combat, other enemies will summon minions, and so on (third interesting feature!). Also there are no random encounters, all enemies are unique and static, yes since the game is linear some must be killed to proceed, while others must be found looking around and unlocking... nah I won't tell you more! 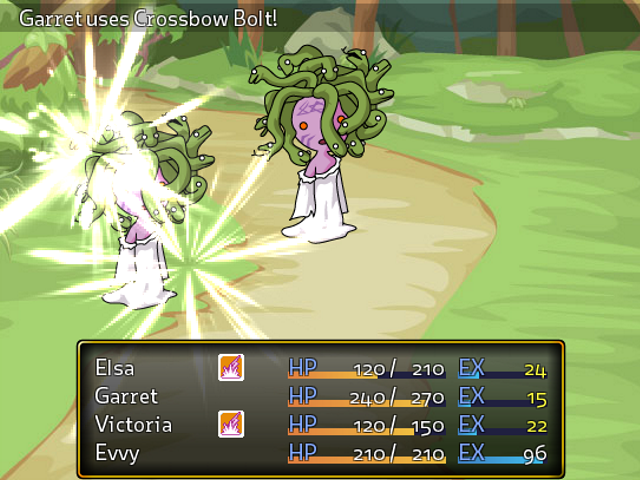 Who is Garret? Uhmm ok, it's because I renamed some characters!

Graphically the game is colorful, I especially loved the facesets (with varied expressions) and the monsters, that as I mentioned before are all different. But there are also pretty backgrounds and nice maps, that are small and quite simple (let's say functional) but this is a short lighthearted adventure and a sort of parody of the heroic fantasy games, so it's ok because if things drags for too long they may become boring!

The game is well written and the story is entertaining, there are three different endings (so far I got the Normal and Best endings, I have still to unlock the Special ending), but what impressed me is how funny are the various characters that populates the small kingdom! 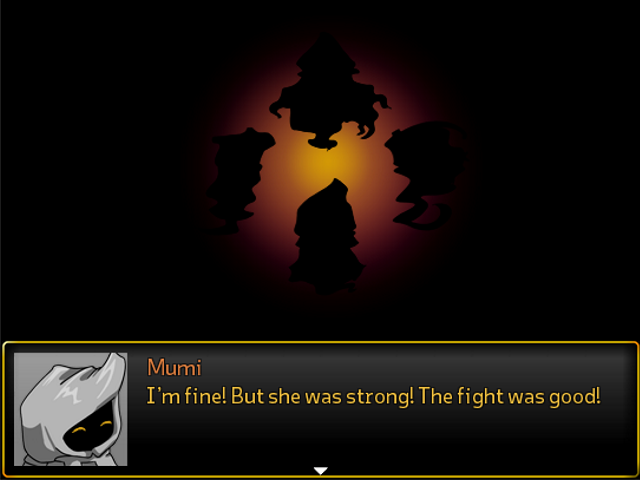 She is VERY strong indeed! (but her companions are unvaluable too!)


Final Verdict
This game has many things I like, for example many very different characters, unlockables and an entertaining short story (I guess that you can finish it in 2/3 hours), and lacks many things I do NOT like: random encounters, grinding and giant dungeons. It's fun, fast and hilarious, and also has distinctive mechanics and art that make it stand out. What else? Oh yeah, this was originally made for the VC Ace Lite cook off contest in two weeks!!!

There is not much to complain, just a couple of things: the first is that the game manual (the one in Elsa's inventory) answers to some questions but not everything... anyway it is ok since it's suggested to experiment & explore! Second, the game is pretty linear (except for some unlockables and added hidden ccntent, like the different endings) and focused on combat, even if there are a couple of quests but these can by solved just interacting with everyone and everything. Yeah, no puzzles, no other extra activities, even if I expected some due to a particular dialogue (of the sailor) that did not lead to anything. Anyway due to the short time in which it was made and the exceptional result, I cannot say that I liked it a lot!

Really a lot! 4,5/5 because this is almost perfect!