"Scorpion Squad" was developed by walldeaf using RPG Maker VX and stands out as a rather solid first time project. Which is definitely something to take pride in considering how bad most developer's first games are. Unfortunately this game only serves as a reminder of what could have been now a days seeing as how this is the only game he ever finished.

Story
Summary
"Scorpion Squad" follows the adventures of Shane Scorpion, a young bounty hunter with a need to prove himself, as he goes about solving problems for his small island at the direction of Bernard, his guild master. Though it looks like the bounty hunting business has been a bit slow of late considering Shane starts the game out at level one. Which is probably why Shane jumps at chance to recover a necklace and a ring at the behest of Bernard and his client.

Cons
"Scorpion Squad" suffers from a lot of narrative flaws in my opinion. After all, just because a game is short doesn't mean it can try to fit in some character growth or development. Or at the very least it should try to flesh out the backstory behind Shane Scorpion, the only bounty hunter in paradise. As it stands the only thing we really learn about Shane is that he loves killing, but why he's so obsessed with bisecting random monsters with a giant sword is never explained.

Ending
Thankfully, this section isn't going to include plot spoilers, but I can't help but feel annoyed with the fact that this game ends with a game over screen when you beat it. This just always comes across to me as the developer flipping the bird at the player for taking the time to play their game.

Gameplay
Difficulty
"Scorpion Squad" is clearly designed around a casual experience. As a result the battles in this game are rather dull for someone's whose been around the block a few times. So much so that I wouldn't recommend playing this game if you like the thrill that comes from taking on a monster that has the potential to strap the player to the &$*# barrel if you screw up. Because your definitely not going to find that in this game. In fact, you can basically bisect any monster in this game with two swings of Shane's broadsword. And you'll only bust out your special abilities during boss battles in order to chop them down a little bit faster. In fact, if wasn't for the fact that this game can be readily beaten in 30 to 40 minutes then I'd probably hate this game because of how boring the combat would start to feel after a while.

Monster Selection
The game definitely features some rather odd choices when it comes to deciding where enemies are placed. For starters you only encounter bats on the world map. And while many would argue that this decision in and of itself isn't particular strange. I'd counter with the fact that you usually don't encounter bats outside of mines or caves in the middle of broad daylight. So it definitely stands out as a rather odd feature.

Though, I think the weirdest choice has to be filling up a mine with gators. While I do appreciate the idea of populating a game with a few aquatic beasts considering how difficult it is to come up with a scenario where they would normally be appropriate. I'd also argue that it's weird that you'd find a ton of ambush predators that usually hide in murky water just casually laying about in an old mine that appears to be drier then the deserts that surround it.

On the graphical side of things "Scorpion Squad" appears to largely be comprised of RTP resources which is both a blessing and a curse in my opinion. On the plus side it does insure the game lives up to a certain level of quality. On the downside it means the game really doesn't stand out in any meaningful way.

But to end on a more positive note about this section. The game does include a few custom animations. So at leas the game has that going for it. 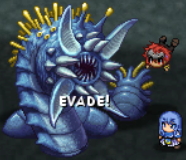 author=Annazel
In the beginning, it says the mine is to the east. But it's to the west. ;)

This issue has been partially addressed. When Bernard first gives you the mission at the mine he tells you to head West, but if you talk to him afterwards he will tell you to head East.

While I may have come across as highly critical of this game in my review. I still haven't changed my opinion that "Scorpion Squad" is a rather solid first time project, but that isn't the same thing as saying that this game is good. In fact, I'd argue that this game is painstakingly average in most regards, but that's what makes this game stand out as solid first time effort. And I really would have loved to see what walldeaf could have done if he'd gotten some more experience under his belt before he left.