Good 'afternooning', peons. I bring forth, from the depths of my ass, a game to play just in time for April Fools! "Ar Pee Gee Maekur Vee Ex Ayce" is a masterpiece that will take your breath away and blow it straight back at you.

... No really, this is a joke game, one made by a cheerful yet slightly irritable game development hobbyist. This is technically my first game released for RMVX Ace, and it's a great program, but it's overload of accommodations can be harmful to the game development process, especially for inexperienced developers. If you feel like killing some times and gaining a few laughs, give this game a try.

WARNING:
This game contains slight use of offensive language. You also will be trolled, see images that cannot be unseen, suffer a loss of brain cells and be cheated... Possibly.

STORY:
Long, long time ago, in a galaxy far away, Nabu was under attack...
While that was happening, in another galaxy far away, a naked king weeps. His one and only daughter, Princess Noname, and his prestigious royal attire, have been taken away by the wretched, evil Demon Overlord.

The demon overlord is an entity that suddenly arrived in the previously peaceful world of Half-Assed RPG Maker Land, poisoning its pristine landscape with his army of monsters and specters. Baby-faced slimes flooded the plains; derpy, Asian bats cluttered the caves, and Ogres obsessed with j-pop and techno music wrecked havoc across every town. All of these assaults were minor, however, compared to what the dreaded demon overlord did to his royal majesty. Cold in his underwear, the King spread a message throughout the kingdom, asking for help.

Help came... Or did it? A generic RTP warrior, named Erick, answered the king's call to arms. Initially, he refused to embark on the treacherous journey, for he hates fighting pathetic monsters and solving puzzles, but after some persuasion by the king himself, Erick agreed to save the princess, return his majesty's royal clothing, and purge the land of this vile demon king.

Erick, or "Airick" as his associates call him, now embarks on an epic journey to rid Half-Assed RPG Maker Land from the clutches of the demon. What he doesn't know, however, is that his journey will be filled with testing trials.

CHARACTERS:
Erick "Airick", the Silvur Reepurr
Known for becoming uncontrollable in battles when berserk, and having a hatred for puzzles, Erick took it upon himself to help the King of Half-Assed RPG Maker Land defeat the evil demon overlord.

Natalee "Natuhlee", the Thundr Fst
She is a skilled martial fartest who has mastered the art of Eat&Chu. She is Erick's love interest and an important asset to him when it comes to fighting, be it both starvation and monsters.

Noah "Knowuh", the Str See Err
A hermit who's only friend just so happens to be Erick, who he often suffers from abuse. He is capable of seeing the stars and is masterful with oral pleasure.

Isabelle "Is A Bell", the Grcefull Niytmr
She is a witch who apparently had a failed reincarnation at some point, but very few of her friends actually care. She is close friends with Erick and is always willing to offer sage advice to him.

The Demon Overlord
Who is this mysterious, hell-born being? Why is he so bent on destroying the world? Why am I asking these stupid questions? Why do you care?

Credits:
Graphics - Enterbrain, myself, and various other people.
Music - Enterbrain, Squaresoft, Nintendo... I think that's it.
... And whoever the movies I used belong to.

WELCOME TO THE RPG MAKER COMMUNITY! WE MAKE GAMES... I THINK!

Every entrance to an evil overlord's room needs one 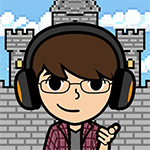 Regardless, that was awesome, Liberty! I'm surprised I didn't hear you pulling your hair out in the Encounter Room, though.
Liberty

It was an... experience. XD
Nobita-chan

author=CashmereCat
u will probs laugh


The blue baby head made me laugh, and I liked the character arts. I say Ratty has a hand in most recent Square-Enix character art development, eh?