The RMW Chain Game by a whole lot of people (Deckiller and Despain being the lead developers) is an atypical RPG created with RPG Maker VX Ace. As a chain game, it was not planned beforehand, but instead passed on from creator to creator, who each added one chapter until the game was finished. This approach that largely relies on improvisation and runs the risk of turning the game into a pointless mess is what makes a chain game so interesting. In this case, while The RMW Chain Game has a number of flaws, it was pulled off with remarkable success.

The game follows the adventures of treasure hunter Gita and, later on, a small crowd of allies she managed to gather. Gita's perfectly happy looting of an ancient sand temple is rudely interrupted as a mysterious Shadowy Being appears, tells her how to proceed on her destined path, and calls her "Eric the Silver Reaper". From that point on, Gita is inevitably forced into heroic missions she never wanted anything to do with in the first place. Will she be able to survive dangerous dungeons, treacherous mercenaries and the developers' random ideas? 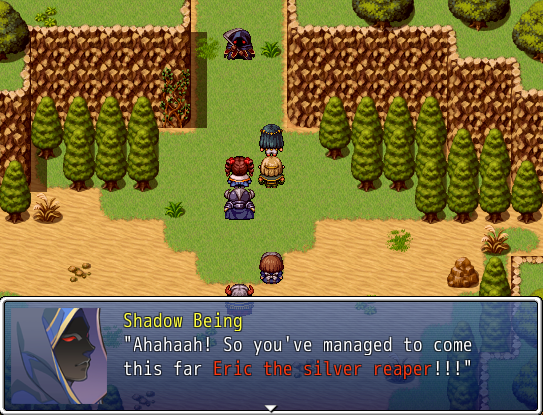 At this rate, it won't be long until Gita gets an identity crisis.


Most of the graphics and music used are standard RTP, which especially makes sense in this kind of game. They are generally used well and appropriately, though with a few exceptions.
This immediately brings me to an aspect of the game that makes it both unique and slightly irritating at times: The inconsistencies in style as a result of each chapter being created by a different person. This applies to storytelling, visuals and gameplay alike. A few of the changes are really striking, most noticably the sudden appearance of battles after there being none during the whole starting portion of the game, strong and sometimes almost random shifts in the overall tone and stark differences in mapping quality. On the other hand, in some cases the developers managed to integrate their own style so well into what had been created before that I didn't even notice a new chapter had begun.

Over the course of the game, the player will get to know a number of characters and team members, among them a dark knight who still has to learn how to be evil, a "battle maid" obsessed with cleaning and, of course, the protagonist Gita who can't seem to evade her destiny as "Eric the Silver Reaper". The wacky yet colourful characters enrich the very odd story which seems to become more inexplicable with every chapter. Surprisingly, while a few plotholes remain, the creators actually managed to ultimately bring the story to a somewhat satisfying end. 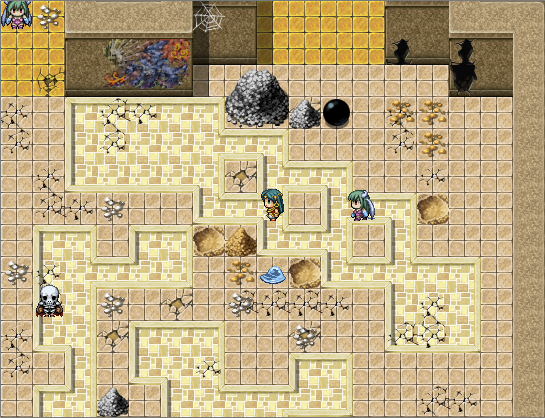 A room in the Inverse Building dungeon, which literally turns dungeon design on its head.


The RMW Chain Game has a number of features that enhance the gameplay in multiple areas, such as a few nice additions to the standard battle system, a good amount of minigames and sidequests and some funny bits like a merchant who collects worthless but "epic" equipment. Most battles unfortunately aren't very interesting or challenging, though some of the bosses can be pretty tough.
However, the area where the game truly shines is the dungeons. It is clear a lot of effort has been put into these, and their quality and consistency in design philosophy is remarkable. With their combination of clever mechanics, puzzles and challenges, most of these dungeons have a distinct Zelda-like feeling to them. They alone make The RMW Chain Game more than worth your time.

As is to be expected from a game like this, there is one nemesis that haunts it throughout: bugs. Sometimes it's just passability errors like the ability to walk into and on walls. In another case, all enemy encounters in a whole dungeon keep getting stuck in their movement cycles. My personal favourite was a random character graphic standing on a wall inside a building during a cutscene. I kept wondering who that person was and if and why he was spying on the party, until it occured to me it was simply a graphical error. And of course there are the save crystals, which are not really a bug but more of a design mistake, since saving is possible anywhere but the crystals were never removed.
Still, no matter whether the player finds these bugs irritating or hilarious, they are never game-breaking or making progress impossible. They are just the weird but harmless oddities that inevitably come with a chain game project. 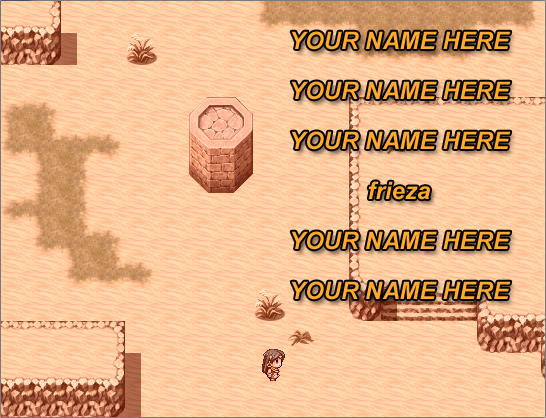 Neat! Apparently, five out of six creators of this game were me.


Conclusion:
When seen out of context, The RMW Chain Game would best be described as a messy game with lots of clever ideas and a few instances of poor implementation. However, it makes no sense to ignore that the creation of this game was, in a way, also a game. And while seeing the ideas of 11 different people merge into something that vaguely resembles a game would be special enough already, The RMW Chain Game even managed to become a mostly enjoyable and playable actual RPG. Quite the accomplishment.
This is the kind of games that are not meant to be rated. They are meant to be enjoyed and marveled upon - both by the player and the creators.

Maybe when someone has free time they could polish it a little, maybe replace all of the 'Your Name Here' pictures with the actual developers.
Decky

Close
10/22/2015 11:50 AM
Thanks for the review! I can't even begin to tell you the amount of in-the-shower brainstorming I did to figure out how to end the game in those last two chapters, heh.
NeverSilent

Close
10/22/2015 06:49 PM
You're welcome! Now, more than a year after having written this review, I don't remember all of the details about this game, but I still know that at many points during the game, I didn't even have the slightest idea how all of this could ever make sense. I was very impressed with the way you managed to wrap it all up. Quite the accomplishment.
Pages: 1