A game with an identity crisis. 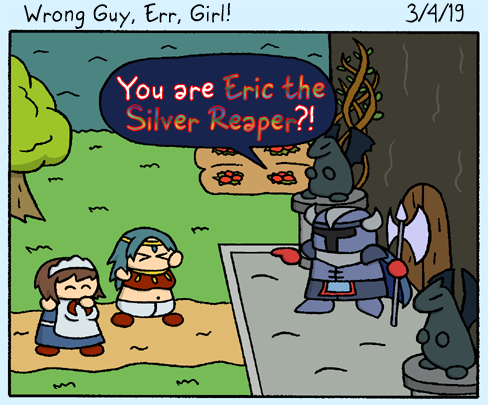 The Chain Game is a short RPG that was created by several developers, each one adding their own chapter as it was passed around. It’s very much a product of the process, but it has some fun and interesting things going for it, in spite of the weird approach to its creation.

The resources used to make it are almost exclusively RTP, which makes sense since that allowed the devs to all draw from the same pool of stuff. You may recognize a lot of its component parts, but thankfully, it’s greater than the sum of them. Its heart lies in its story and gameplay. However, you’ll need the VX RTP installed to run the game at all, so watch out for that.

You play as Gita, a wandering treasure-seeker who gets unwillingly dragged into a bizarre chain of events. After a mystic bard mistakenly identifies her as the hero of legend, Eric the Silver Reaper (in spite of not even being male), she finds herself on a quest intended for somebody else, and makes the most of it. Along the way, she meets some quirky characters who join her adventure, like the good-turned-bad knight who wants to duel with Eric after the quest, or the bad-turned-good assassin who doesn’t want to kill people anymore (neither of whom has any clue about being bad/good respectively). They all bumble their way through whatever stands before them.

As you may expect, the writing varies in quality. Because each dev contributed their own chapter, they only had what came before them to build off of, so the characters don’t really get much depth (not that they need it). Party interactions are frequent enough and usually have some measure of care to them, so it’s fun to watch things play out, even if the subject matter isn’t that enthralling. Despite being written by about ten different people, characterization stays pretty consistent, bare-bones though it is.

There are some points where dialogue gets a bit awkward. There are those trademark syntax errors that come from English 2nd-language issues, and there are many places where text gets cut off by the side of the screen. There’s no shortage of typos, either. Maybe it would’ve been against the spirit of the project to clean these things up, but the game’s text could really have used a once-over in post.

The story itself is rather nonsensical, but fun to play through just to see where it’s going. Unfortunately, the ending was kind of a letdown. Without spoiling too much, you arrive at the final dungeon to discover it’s already been completed by the actual Eric, who hands you the final MacGuffin free of charge. After that, it’s a direct warp to the ending sequence, complete with a pushover final boss and wrapped up in an unsatisfying conclusion. It kinda felt like the whole thing built up to a climax that never happened. I get the impression Deckiller may have been in a rush to have it over with, and that’s kind of a shame, because I think it had some great potential. More on that after the next category.

I wasn’t expecting much from this game, given the nature of its development, but I was pleasantly surprised. Not only is it a decently-balanced RPG, but the dungeons and puzzles have a great amount of heart to them. The starting dungeon has no encounters, but there are traps to dodge and puzzles to solve. However, I have to note that this game committed a mortal sin right off the bat…

How about hold Shift to walk instead? I thought the Shift to Run debate was settled ages ago, but then again, this is kind of an old game by now. Anyway, you’ll be enduring wrist cramps if you play for too long, so watch out for that.

But as I was saying, none of this game’s dungeons are just a series of rooms to move through. They each have their own puzzles and gimmicks that are cleverly implemented. Some are cleverer than others, but it was always cool to see what new mechanic each one presented to you. Beyond the first dungeon’s sandy pyramid-style traps, the second dungeon lets you flip the whole building to walk on the ceiling. The purpose of this is to roll a boulder into position to use as a stepping stone, but grooves in the ceiling and floor limit its movement. A later dungeon gives you a spin move that you can activate to break damaged walls and obliterate map encounters.

Speaking of, the game does not use random encounters. You can always see your enemies on the field. Some battles feature a “leader” monster, who stands in the middle and has a morale effect on its allies. Defeating it first inflicts confusion or stun on the remaining foes, but this isn’t always a feature. You can do okay in battle by mashing attack, but it’s quicker to put your strategies to use. There are no clear rules about elements, but it’s not significant enough to matter. There are many spells you can learn, and spells can be given to almost any character. Some monsters drop spell books, letting you pile these abilities onto multiple party members. Your party gets a bit large for a game of this length, and not everyone quite stands out, but you have plenty of options (and experience is shared for non-battlers). There are even some skills that are tied to equipment, so you can only use them with certain weapons. Overall, it’s not very difficult, but some of the bosses gave me more of a challenge than I expected. Honestly, I was surprised the game had any fighting at all, but it was handled well.

For me, this all built up to the letdown I mentioned earlier. Hilarious as it is to arrive at the last dungeon only to find it’s already finished, it’s not very interesting or climactic. I was looking forward to what fun new gimmick the dungeon might have, or even seeing old gimmicks possibly revisited. It also would’ve been nice to see what Eric is actually capable of, since his stay in the party is so short otherwise. Loose ends are tied up quickly and simply, leaving it feeling like a lot of wasted potential.

I should also note that there are some map exploration issues. Encounters have different patterns to their movement, but some of them are borked in later chapters. They’ll carelessly walk into walls and get stuck, mostly leaving you free to ignore them. The passability of tiles is something else that needs a revisit, as I found my way up plenty of walls I had no business climbing.

Some graphics seem to also have been mistakenly replaced, like the snowy treetops I saw poking out of the barrels in the wine room. There was even a point where I soft-locked the game by triggering a cutscene while facing an unintended direction.


“Only use doors as directed.”

Let’s wrap this up.

The Chain Game is a decent RPG with some clever ideas at play, but it falls kinda flat due to lack of quality control and a hurried conclusion. One good sweep to clean up the bugs and typos would do it wonders. It would need one last proper chapter to really feel complete, but alas, it is what it is. I’d like to rate it higher, but I have to give this a…

Close
03/05/2019 08:12 PM
Good review and the rating is on point. It's an average RPG Maker game, on the whole. But I gotta say: it took a LOT of thought to wrap up the story in a quick and clean manner. I took over at the cutscenes before the well dungeon (the last "playable" dungeon where you get the lens of truth); before that point, the story was going in 1,000,000 different directions. The plotting in some of the earlier chapters was often contradictory, but I didn't even have to retcon things. It was quite the challenge to come up with a logical conclusion that wasn't like some deus ex machina. I'm very proud of the plotting there, as unsatisfying as it might be. Think of having to end the TV series Lost after Season 2 and having a week to write the script.

The game had a hard deadline due to some event so, yes, it was wrapped up rather quickly. Zeuzio even made a final dungeon but we just didn't have the time to fully implement it. If I had been around sooner I might've imposed more quality control, but that probably would've received backlash since part of the charm was the unpolished nature of the thing. If anything is unsatisfying, then so be it. Everyone had fun making it, and that's all that counts.
halibabica

from Deckiller
It was quite the challenge to come up with a logical conclusion that wasn't like some deus ex machina.


Not gonna lie, that's still how it felt to me. The line "It's all too easy!" didn't quite help, though it was kinda funny anyway.

I can appreciate the deadlines and the charm and all that. I just try to look at things objectively, and this is how my experience held up. It's a shame it had to end so abruptly, but I understand the reasons why.

All things considered, the ending did manage to tie the mess together, but like I always say: implementation is key. If you had a final chapter to space it out with, it wouldn't have to all come crashing down at once, but that was the nature of the project. It honestly could've been much, much worse.
Decky

Close
03/06/2019 06:37 PM
I remember playing this a long time ago, I actually liked the fact that the first mystery the story gives you about the female protagonist being able to be a he made sense. Maybe because I thought out of the box on how it could be possible.

I also liked how different developers took the game in different directions and had complete freedom and creativity on what to do. Sure it did make the game a little messy, but that was part of the fun when playing it.

Sadly I don't remember much else or enough of this game to comment further, nor the ending. So that's my compliment for now.
seacliff217

Close
03/07/2019 10:43 PM
I definitely wouldn't mind revisiting and help polish this game as well. However, that kind of ruins the point of the chain game's initial rules.

Chapter 8 was the first thing RPG Maker related I released on the web. I was only 16 years old at the time. My inexperience and carelessness lead to what I believe to be the most unpolished chapter in this game.

However, instead of worrying about the flaws here, I think a more enjoyable idea would be to start another chain game with a similar set of rules and standards. At the very least, I can be confident my contribution will be of higher quality...

I know Deck wanted to do something more with the successor of this game, The Radiant Chain, about a year ago. But maybe that was too ambitious and time-consuming for a project that varied in quality and had an uncertain future. I would have more confidence in a simpler chain game like this. Finish a single chapter, release it into the wild, make sure no one is hogging the project for several weeks, and see what monstrosity comes out of it.

Another thing that would have been cool was if Ralph's (Forgot his in-game name) form changing I introduced actually had some mechanical effect with his stats and skills. Unfortunately, I had no idea how to do that at the time (and I now know it's not that hard to do either.)
Pages: 1