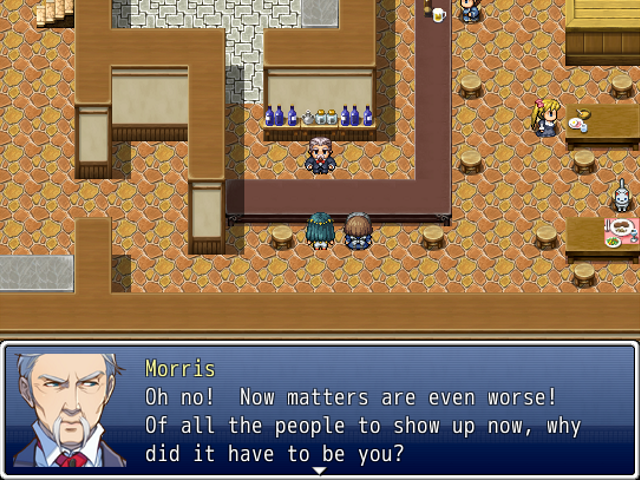 Hello and welcome to one of the types of games that most interest me: the chain games!
...
Ok, so what's this? Well, if you do not know, it's rather simple: a chain game is a particular kind of collaboration between authors in which each developer makes a chapter (a link of the chain-game!) and these will compose a single adventure.
It's a rather rare kind of collaboration (at least from what I noticed) because it's harder than just sharing the different roles when making a game, and you also have to take in account what the other authors made in the previous chapters while deciding a directions of the story. Well, more or less, I think!

Anyway that's enough! Let's talk of the RMW Chain Game, a game made in few months and consisting of 11 chapters (and guess how many developers worked on this game? YES 11!).

The game begins with a silent intro in which we meet the protagonist of the game and our alter ego: Gita (that means trip, excursion in italian... is this just a coincidence?). Gita is an adventurer and a treasure hunter that by chance enters a lost temple and becomes involved in a mysterious prophecy about some . The problem is that the real predestined hero is a certain Eric the Silver Reaper, and both the mysterious characters involved, the White Minstrel and the Shadow Being seems to believed that Gita IS this chosen one. So Gita is involved (against her will) in a series of adventures that will make her encounter friends and foes. Some people will join her in this wacky adventure, for example a maid that is obsessed with dusting and cleaning things, a wimpy dark knight in a fullplate armor that wants to be a villain, a narcissistic elf and a former assassin. 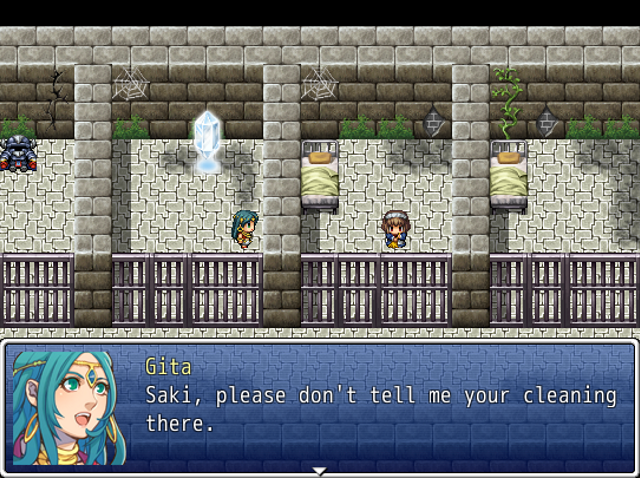 My friend, you have a problem!!!

In the beginning the game starts as an adventure/exploration game, then afte meeting the first companion (the maid) ti switches to classical jrpg game, or better, a parody of it.
The gameplay is varied: there are many little puzzles that includes pressing levers and finding keys, traps to avoid, and combat encounters (some are avoidable and some aren't, luckily there are no random battles, and that's always a good thing!). For some strange reason there are save points scattered everywhere represented by crystals, BUT you can also save anytime and anywhere from the menu. It's true that some of them are positioned before boss fights (so they can be a fair warning to save), but that's the 10% of them! Uhm I do not know if this it's an imprecision or done on purpouse, anyway it's ok, to rest instead you have to sleep in a tent if in the wilderness, or pay a room in a tavern. Classic, isn't it?

Besides the main quest this game also includes some optional quests and additional loot, my favourite is providing the useless artifacts to the collector: these are not-so-useful magical items (like the epic but mediocre "katana of awesomeness" or an amulet that has the power to make you slow!) that can be found in some particular locations. But there are also some more classical side quests, like the evergreen "kill all the rats the the basement", in all cases I found the difficulty to be a bit on the easy side, but it's not bad, this is supposed to be a lighthearted adventure and a parody after all (during the prison escape you can even hear the police sirens, then that curse... I won't samy more but it is hilarious). Not to be taken seriously, if you want to enjoy it! 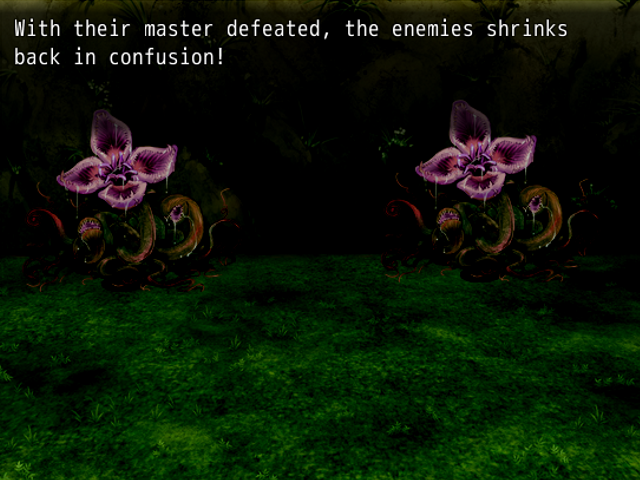 Yes! That was a good strategy!

Combat is in the usual jrpg style: characters have both MP (magic/mana points) and TP (earned during combat), the first is used to cast spells, the second to use special attacks. While the attacks are specific of the characters, spells can instead be bought and learned by everyone (even if for example the maid starts already with some spells). For the most part combat is rather average and not really interesting, but there are some cool ideas like enemies weakened by the death of their leader, TP abilities dependant on the weapon equipped, and few really interesting opponents (like the three headed cerberus that has a head, Cadpig, that is totally useless, since it spends each turn barking or chasing its tail!). Bosses are also pretty strong and requires some strategy, anyway combat is not the main focus of the game, the best of it is clearly the adventure and all the events and situations the developers created for Gita!

Visually the game uses Rtp, but I do not mind this at all: the game is supposed to be a parody of the jrpg genre, so having a party with a maid and an evil warrior, wearing a fish as helmet and a frilly dress, using a flamethrower or a magic wand of love is something that transforms an average looking game into a zany and parodistic adventure aimed to make fun of the classical Jrpg tropes (the predestined hero, the quests, the magical items, the Npcs and so on!). It must be clarified that mapping is still ok (and exploration is rewarded with extra loot, even if this often means also extra combat encounters), decent and some ideas are even brilliant (like the dungeon where you can reverse gravity! Nice idea, really, because it is also utilised for an interesting puzzle!). 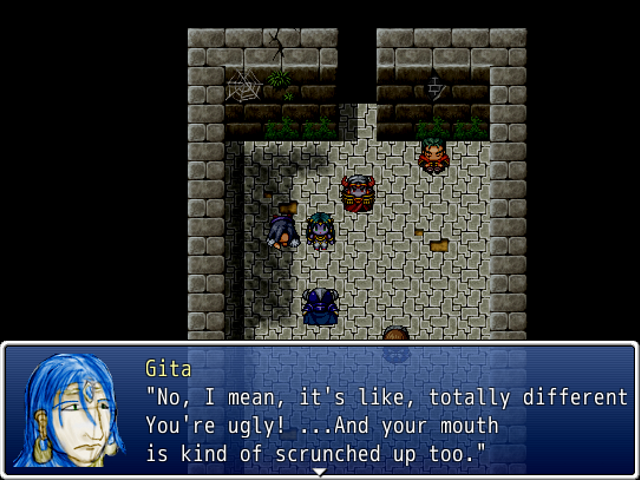 Nobody has a mirror, I guess!

Final Verdict
The biggest flaw of RMW Chain Game is probably the boring title! The real fun of this game comes from the dialogues and the weird situations that the weird party encounters in some weird locations. It's a bigger and longer than I expected (after one hour there was still a lot to do!), and more serious from a gameplay point of view than what appears in the beginning (you start collecting healing items without needing them, with no combat or risk of game over, so that I believed it was a joke game! But no, bosses are actually tough opponents).

Ok, the game isn't clearly perfect and I found some little map errors (one in the temple in the beginning, where you can exit the map and walk on the "black background" ... luckily I was able to re-enter the temple map!), some typos (latter>ladder, benifit>benefit, etc) and others minor flaw. The plot is also a total a mess, clearly due to the collaboration of 11 different developers, but despite this at least the final result is a complete game with an enjoyable gameplay (and this takes skills, not to mention the fact that making a chain game is not exactly an easy task, in my opinion). And that's not an easy task, I mean, I enjoyed this game more than some solo projects that probably took more time (and less effort) than this one!

In the end I found this game a cool game with many likeable characters (despite having no reason to join Gita, ahaha!), some minor flaws, and inconsistent story, BUT lots of puzzles, humor, minigames, combat and some really clever ideas. Not bad, not bad at all! Very enjoyable! 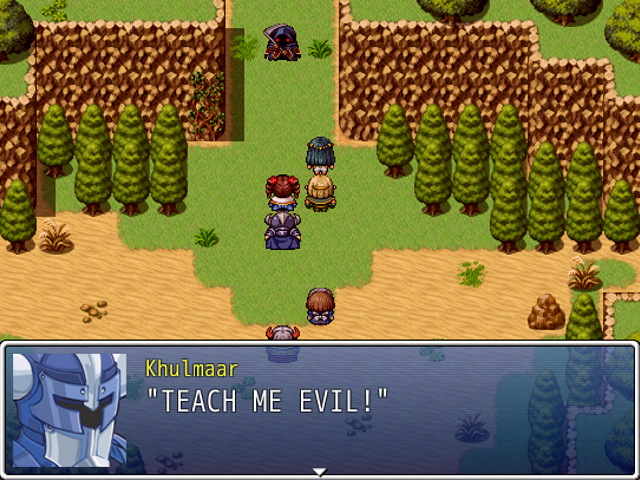