0 reviews
Save to Dropbox
Features

Unique Role System with over 20 classes (5 Available in Current Demo)
Medal System for Achievements. Collect them all!
Tripps Dice Mini Game
No Character Levels. Characters get stronger based on their proficiency in the various Roles they have acquired.
No Random Encounters
No Experience Loss on Death

Throughout the game, the characters acquire various Roles that they can use in battle. Will you choose to be a blade-wielding Duelist to focus your attacks on a single foe? Or an Herbalist tending to the wounds of yourself and your allies? The complete game will have over 20 Roles available.

New Roles are acquired from various Masters around the world. If one wishes to become a Gambler, a Master Gambler can teach you that Role.

Roles can be changed at any time between battles, so the characters can benefit from the bonuses of various roles at any time.

Example of the Role changing screen: 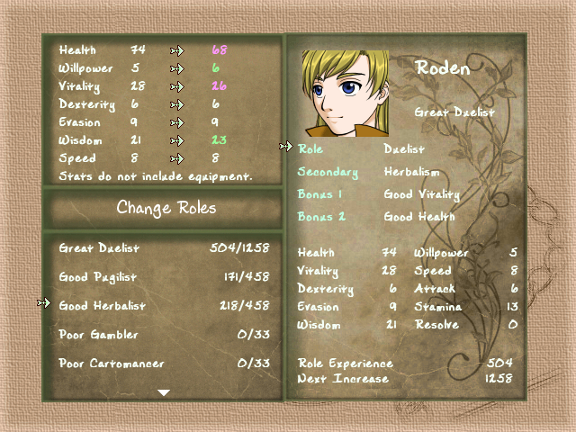 Example of the Role leveling up: 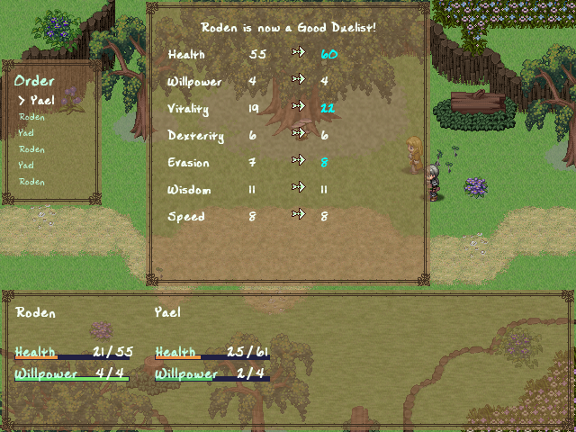 As a character levels up, skills are acquired in the current role. In addition to these skills, a character may choose one set of secondary skills to use as well. 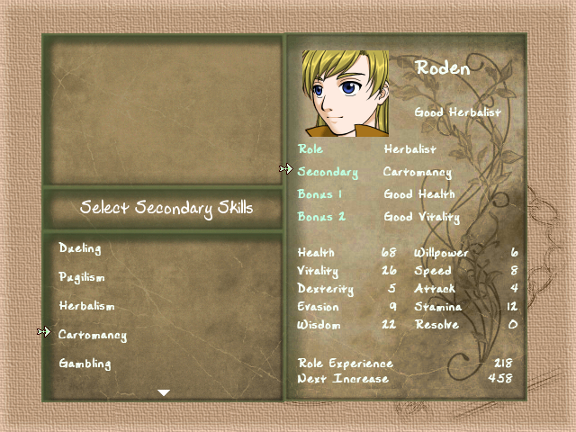 Certain jobs unlock passive bonus skills. Each character may select two of these once they have been learned. 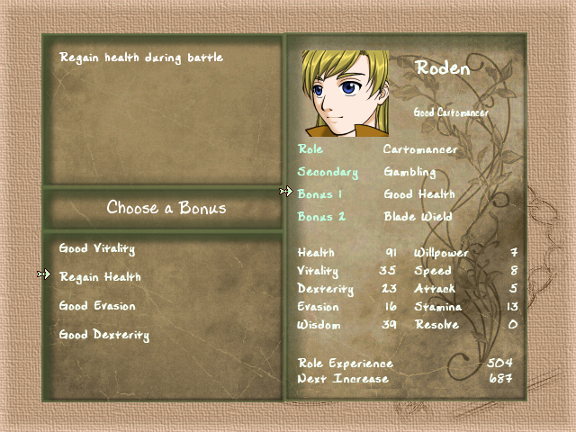 Instead of using a standard MP system, Seasons for Seasons uses Willpower to fuel skills. One point of Willpower is regained each time a character attacks. Two points are regained when a character defends. This way, the skill system isn't an attrition system where players are discouraged from using skills, saving their MP for a boss battle. Instead, players are encouraged to use their skills frequently. (There are also Roles, skills and equipment that can allow a character to regain Willpower even faster!)

Roden Zalle
A clock maker in the capital city of Bytrium.

Yael Tannat
A soldier from a farming family who comes home to find out grave news about his sister.

The lives of Roden and Yael are changed dramatically after an eccentric stranger visits each of them in turn, offering to solve their problems...for a price. The pair are compelled to solve the mystery of what happened as they set out for the world in a tale of second chances and lost opportunities.

I have uploaded Version 1.003. The only change was removing the auto font installer.
This is the Role changing screen. Stats change based on the Role one is selecting.

Medals are available and are unlocked when the player earns various achievements. More medals will be added as development continues.

Close
05/03/2013 04:11 AM
I recommend resizing the screenshots in the game description, or removing them completely.
Deividdo

Close
05/07/2013 03:57 AM
Thanks, Jayje. I was glad to see some other XP projects as well. It's still my favorite maker. I'll definitely be playing your game too.
Dyhalto

Close
05/07/2013 05:11 AM
This looks like it has some potential. Subscribed.
Also, good job making some decent facesets with that generator. Most don't look that good.
bulmabriefs144

Uh, I do have one concern though. The menus thing seems to have alot of invisible stuff (I couldn't manage to put fileutils.rb anywhere and so I'd go to Equip menu and not be able to see the pointer arrow in menus). What do I do to get these things to display?
Deividdo

The fileutils.rb was in the Fonts folder as a last attempt to get the auto font installer to work. I shouldn't have left it in there. I apologize for the confusion.

I have uploaded a new version of the game (v1.004) with the cursor issue corrected.
Seeric
2155

Close
06/01/2013 01:01 PM
I'm currently playing the demo and I'm still fairly early in, but I'm definitely liking this so far. I did feel like it took a bit long to get to the actual combat part of the game, but the story was interesting enough along the way that this isn't really an issue (plus I mainly blame this on myself for managing to go to every single location in the city at the very start of the game except the part which progressed the plot). I have to say the game also looks great (especially the use of tinting) and both in terms of tone and aesthetics the game most closely reminds me of To The Moon, which is almost never a bad thing.

As far as constructive criticism goes, the only real issue I could find so far is a severe lack of flavor text when examining various objects, but this is something which can always be added in later on. On a more minor note, stairs can be walked onto from the side and this looks rather odd so you may want to change the stair tiles to only be vertically approachable.
Deividdo

Close
06/01/2013 04:26 PM
Thank you for the comment, Seeric. It's a fair point that it does take a little while to get to the first battle. That concerned me, and it was a matter I raised with my playtesters. But they all said as you did that the story kept them engaged enough that it wasn't important.

I still have to play To The Moon, but I have always been deeply impressed by Kan Gao's other work, so I take that as quite a compliment.

Thank you for pointing out the issue with the stairs. I suppose I never found it odd myself. That will be corrected in the next build. As far as flavor text, this is something I would like to add, but I have been focusing on other aspects of the game before going back to add these in.
Roy
265

Close
06/01/2013 05:32 PM
So where ARE the fonts I need? If they are already in the game file dont they automatically kick in? Sorry If I missed something somewhere.
Deividdo

In order to install the fonts, go to the Fonts folder, right click on the Fonts and select install (assuming you are using Windows 7). The method may be different for another operating system.
Roy
265

Close
06/01/2013 06:20 PM
Yes I saw them there. I have Windows XP and no matter what I tried they wont work. Apparently Ive missed something essentially obvious.
Deividdo

Close
06/01/2013 07:22 PM
In Windows XP you should be able to install them by pasting the files into the Windows font folder. It's normally located in C:\windows\fonts
Roy
265

author=Deividdo
In Windows XP you should be able to install them by pasting the files into the Windows font folder. It's normally located in C:\windows\fonts

Now.....Ive been promised a wonderful harvest but dont know what to do next. Everyone is fast asleep and the stranger is nowhere to seen. I cant go into the city either. What to do, what to do?
bulmabriefs144

Close
06/01/2013 09:21 PM
I have two issues with this game. The first is around where you have frogs and chickens (and after you set up tent for the night), there is a ledge you can enter directly from the side instead of from the stairs. Also, when I was near the side enemies could sometimes attack me.

Second... I have no idea how to get the rope hanging over the waterfall. I can't push the rocks either so I'm stuck.
Deividdo

author=Roy
Now.....Ive been promised a wonderful harvest but dont know what to do next. Everyone is fast asleep and the stranger is nowhere to seen. I cant go into the city either. What to do, what to do?


Show
The rest of the family is asleep. Maybe it's time to go to bed as well.

author=bulmabriefs144
I have two issues with this game. The first is around where you have frogs and chickens (and after you set up tent for the night), there is a ledge you can enter directly from the side instead of from the stairs. Also, when I was near the side enemies could sometimes attack me.

Second... I have no idea how to get the rope hanging over the waterfall. I can't push the rocks either so I'm stuck.

Thank you for pointing those items out. I found the error with the stairs and it will be fixed in the next build. As far as enemies starting battles from the side, I am not sure how to implement an easy fix to this since I am using a range view script to initiate battles. So, sometimes an enemy on a higher ledge is able to start a battle currently. I have an idea of a way to avoid this, but it is not a quick fix at the moment, but I may implement it later.

As far as the rope:

Close
09/13/2013 06:56 PM
This looks sweet :D
when i saw the words job class i thought of ff tactics one of my favorites
i hope this is not dropped like others :(
ive seen quite a few games that could of been amazing and were dropped :(
subbed :D
Deividdo

Close
09/29/2013 02:49 PM
Thanks for the sub. I am still working on the game. I haven't had as much time recently and it may be a bit before the next update, but it certainly isn't dropped.
X0DubleCrash
0

I agree with the others: the slow start to the battles wasn't off-putting at all. Actually, it was quite nice to go through the story without being thrown into a dungeon right away.

I really liked the emotional moments that were put in, and I'm excited as to where the plot is headed! The battle system is also interesting, and so far it hasn't felt like a grind, except for the part mentioned below.

I didn't like so much the part in the mines. The save location was too far, and if you got lost, you'd either have to restart or take a really long time going through. I'm not good with directions, so I had to use a stick-to-the-left strategy to actually complete the dungeon. Too many battles for the lack of saves. The part where you go searching for the bomb is quite difficult since you don't realize what the rope is for. Maybe put a hint when you do get the rope?

I hope you are continuing with this project, because it really is fun :)
Pages: 1