I'll admit that "Hirion" is a project that I'd usually skip over. In fact, I usually only skim through the list of completed games on this site. I suppose some would consider that a bit odd, but I feel as if far too many games end up like "Ellie Starling's Very Long Walk". In other words, a lot of projects on this site are either overtly or quietly abandoned by their developers. As a result, I usually only care about taking a look at finished games. At least that way I can see a developer's vision from beginning to end. 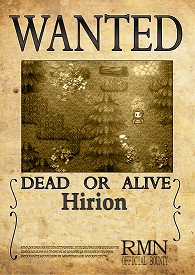 In fact, the only reason I decided to go digging through this site in order to play this game is because their's currently a bounty on it. Though, I don't know if I'll manage to get my review in before bicfarmer since he was planning on tackling this demo as well.

You have to love how the starting letters move further and further to the left as you go down.

"Hirion" really doesn't have much going for it in terms of narrative value at the moment. And to be fair, that isn't exactly uncommon when it comes to dungeon crawlers. After all, your party members really don't have much personality in games like "7th Dragon" or "Etrian Odyssey" for the Nintendo DS. So I really wouldn't be surprised if the same applies to the main character in this game as well. Though, I suppose "Hirion" does offer up room for discussing the moral implications of summoning sentient beings from another world in order to save your own. After all, how does the spell find someone that is qualified? Does it merely steal a hero from another world? Does that mean in order to save your own world your choosing to damn someone else's to darkness? Or is Hirion's continued existence more important on the grounds that it's the linchpin that holds the rest of existence together?

I'll admit that Hirion's combat is both functional and irritating for me. This is because I really don't care for the controls. After all, why I'm attacking with the CTRL key on my keyboard when it would be far simpler to use the A key for physical attacks, the S key for casting spells, and the D key for rotating through my selection of spells. Not to mention this would make it easier to understand why the developer decided to use the Q and W keys as hot keys for activating items that you've assigned to those keys through the menu. And why do I need to activate my equipment menu with the K key? Wouldn't it be far simpler to gain access to this menu from the main menu like in most other RPG Maker games? Or in short, I feel like the controls for this game are rather clunky in their current state.

On the graphical and musical side of things the game is only alright in my opinion. After all, the bulk of the visual assets are found in a lot of other projects. As a result this game really doesn't stand out in any significant way from the rest of the crowd. And while the background music does it's job. None of them really pop in a way that would make me want to listen to them on their own.

"Hirion" is a game whose likely hood of being finished is so small as to be almost nonexistent. As a result, I really can't recommend that people take a look at this demo. A position only reinforced by my issues with the controls as well with the fact that the game stops before the first major boss battle.