Let's all bleed together in The Way ep.5: everyone must bleed!

Pssst, do you see that creepy menu screen? Gloomy mountains, dark red mist, reddish sky.. it really gives some end of the world/apocalypse vibes.
Yeah, that's more or less true, I mean it's not the final episode, but for many characters we met in the part episodes.. it's the end! Lun here is going to turn into George Raymond Richard Martin and murder half of the cast, and probably some of the characters you love. Maybe all of them, who knows? There are at least 6 deaths of important secondary characters, maybe 7 if you did some particular choices in the past episode. Guess what? These will affect also next, final chapter!).
Anyway someone will survive otherwise there would be no game at all! But let's first start with a recap of the previous reviews. 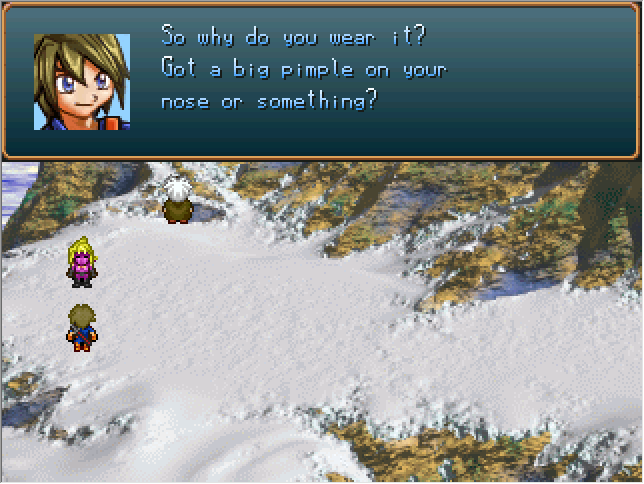 Ohhh come on Rhue! Please don't be a dick for at least ten seconds! And yes, Dirk is over there doing exactly what you are thinking!

Ok, are you ready? Let's all bleed together: last time the game ended with a cliffhanger during finals of the tournament of Estrana, the Phantom Slasher arrived to the city, and Rhue is determined to help Cetsa avoid execution and finally question her. You will be happy to know that most of these situations will be resolved in this episode once for all, and this will also be the end for Estrana (but in a game about wandering it was expected to leave the city sooner or later). I will spare you the details of what will happen, but this will force our beloved characters to resume their travels in the wilderness.

Uh ok, this also means that unfortunately there will be a return of the still life backgrounds and also some uninspired maps done in the classical style (with chipset, that I admit are the pretty ones from the forest of Tales of Phantasia). I especially remember that horrible yellow and red tent, if you play the game you will recognize it, terrible. Pity!
Speaking of the aestetic aspect of the game, on the other hand I admit I liked the usual vast array of facesets and expressions for each character (many secondary characters like Rhorn or Kalmar didn't even have a portrait in the first version, and it's not that they have many lines! But Lun decided to make some custom ones), also there are many poses and custom little animations. Great job here.

The music... there is a nice selection of songs and themes, both original (like the Fighter Spirit or the themes of the various characters ) or from popular games like the 7th Guest, Lunar Eternal Blue, or the classical Anxious Heart from Final Fantasy VII (and don't forget something from the Tenchi Muyo OVA!). 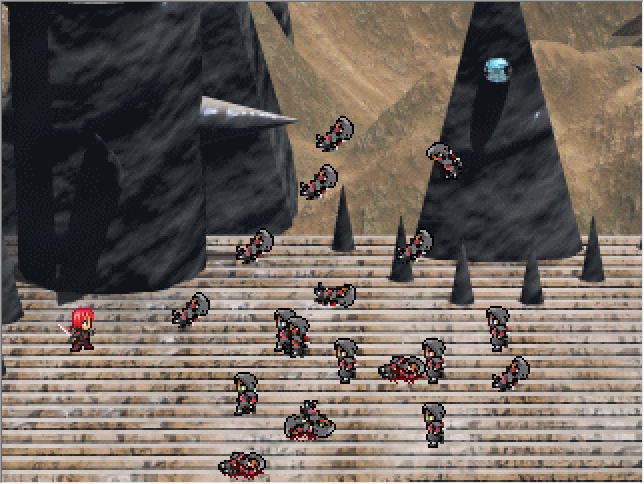 What I liked was instead the gameplay: the travels will bring encounters with various creatures, new duels, one optional plunge and a couple of obligatory fights against some quite important characters of the past episodes. These are really well done, fun and exciting!
But there are also some simple puzzles like the one in the forest, a dungeon, combat against annoying but luckily avoidable enemies (LunCasari never used random encounters, and that's a big plus) and against obligatory and difficult bosses like the beast in Kalmar's fortress (and here to support Rhue Dirk returns as weak and useless as always, but Cetsa won't be much better! After all Lexus in last episode used a similar combat style... and the abilities were rubbish! Gaius is a bit better, and much better than in the past, still most abilities cannot be used and probably there was some material that was cut from the final release). Remember also to explore and look everywhere for hidden bonuses, because these will be permanent upgrades, like in the previous episodes!

And then there is that sequence, oh yes, the (in)famous part in which we can play as Traziun: this is a weird choice because that part is made just to show how badass is that character (that's level 5 for some reason, while everyone other is level 1, because, you know, in The Way you do not earn levels!), a cutscene would have been the same (even if making him playable means that he CAN still be overwhelmed by all the Blood Lyns and lose despite his powerful attacks). It's worth mentioning this part because at the time of the release it was considered a sure award for the best scene for the 2005 Misao. But it lost! (the award was won by Pokemon: The Evil Inside 2) And this at the time made many fan(boys) of the Way series pretty angry for the (deserved) missed award, anyway that's another story for another time of course! 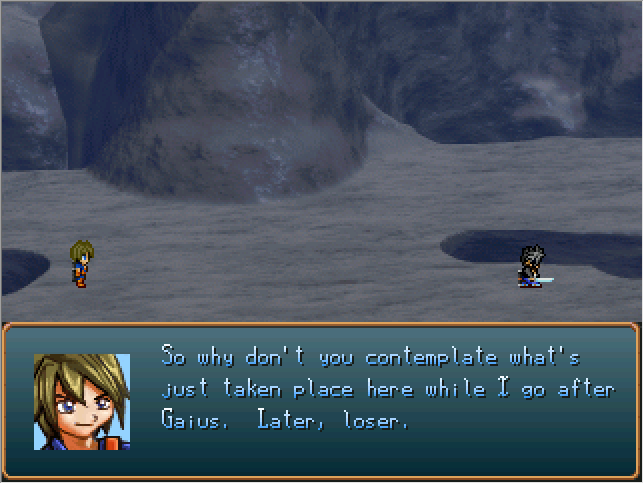 That face!!! You have to earn this scene... And here's why this sounds familiar!

Oh. Did I say "story"? Then let's talk of the story: it's true that in this part we see the end of many storylines about most secondary characters (for better or for worse), and in some cases there will be also some flashbacks and explanation of the events of the past that made them what they are now (so many pieces of the puzzles will be finally revealed and a lot will be explained through some bizzarre sequences), but at the same time the story will go completely off the rails from the second half! Yes! In fact the first part almost throws away all what was built in the precious episode (I mean intrigues in Estrana) and introduces few new characters (like Kalmar)... the problem is that most of the things, locations and characters mentioned in this episode and hinted as important will NEVER be seen or found, and in the end it won't even matter (but this will be explained more clearly in the next episode)!
The reason is simply that Lun was no more inspired, and for a moment he even planned to kill Rhue in this episode and finish the series. On the other hand there was a seventh episode planned that was never realized and probably that's where much of the content that here is hinted should have appeared.
It's just a pity, because it's clear that despite being a complete series it's at the same time incomplete too!

Anyway there are those who love this chapter, and I can totally understand why, it's full of epic and dramatic scenes, many secrets are revealed (but not all of them!) there's a sense of final showdown approaching, and while it starts with a couple of unaivodable defeats, it soon will see Rhue showing that he grew a lot from the humble beginnings. But that's not enough, and that's why this is the penultimate episode, and not the last one! 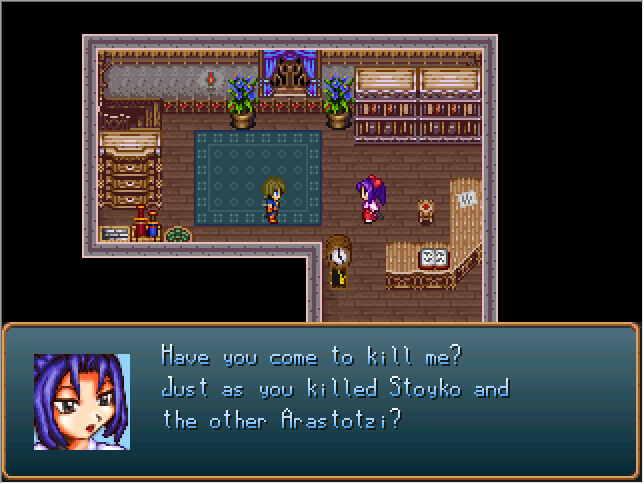 Here you can't select a choice BUT what will happen next depends on some choices made in the previous episode, that will also affect the next!

Final Verdict
Ok, this is the last episode I liked really a LOT! Not as much as the fourth, and probably less than the second, still surely among the three best episodes of the series. It's time to say farewell to many of the characters we met before, but the darkest episode of The Way entertains and keeps the player interesting during all the adventure shifting the perspective between different characters (Rhue, Traziun, Slade and so on).
It's not my favourite, still liked by many players I know, because it's very good. And good you know it's 4/5!
Bye for now!

Extras
The final sequence and the ending slides will show some of the really minor character you may have loved or hated during the last two episodes (I'll just mention two of the four: Rhan and Lossus, if you do not remember them it's not a problem since they have almost no relevance, but the other two I won't mention are more important... and one of them probably deserved to die!) wandering in the wilderness. I love this attention to the little details. And apparently not everyone must bleed!