A relatively short take on the Yume Nikki format.

Usagi is the Japanese word for ‘rabbit’. There are lots of rabbits in this game.

That aside, Usagi is a fairly short Yume Nikki fangame in which you control a girl named Umiko. In her dreams, she searches for Effects, which give her special abilities, and Mementos, which lead to the endgame.

Now, the review section proper. This being a YN fangame, the categories I’m organising my review in will be different from what I would use for reviewing a more conventional game.

World Design: Most areas were easy to navigate. There were one or two exceptions (the teleport maze and the giant maze), but they didn’t take too long to figure out. Moving between worlds was also easy enough. The loops, on the occasions they came into play, rarely posed problems. The mood of each area varied, ranging from cheerful to morbid.
3.5/5 - Above average. The bast aspect of the game. 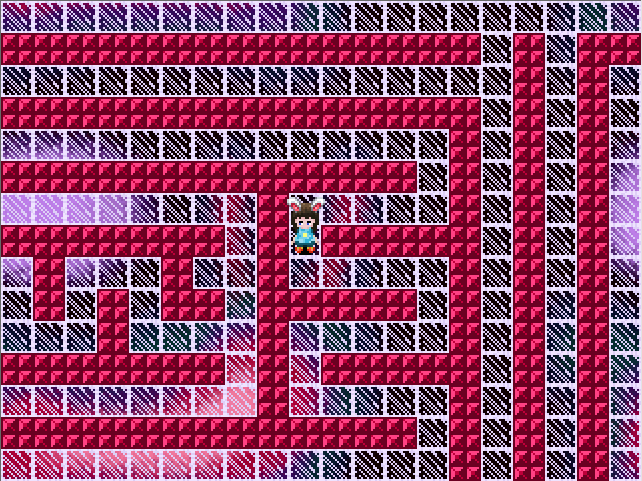 
Graphics: Par for the course, really. The cats and bunnies were cute.
3/5 - Decent looking, with the occasional kawaii factor.

BGM/SFX: The background music consisted of mostly unobtrusive, short loops, as one would expect. There is one particularly painful track, which was no doubt completely intentional. My opinion on the sound effects varies a little. Some of them fit. Others… not so much. The voices were well recorded, though. (And then there’s that ringing phone. Annoyance 100% guaranteed!)
2.5/5 - Mostly average. The annoying bits were (probably) made to be so.

Collectibles: There were 6 Effects and 14 Mementos to find throughout the game, not all of which were situated in easy-to-reach areas. All but one of the Effects modified aspects of the game world, from doubling movement speed to revealing hidden paths. Again, these were the average YN fangame fare. The Mementos, on the other hand, had no purpose except to trigger the endgame and give hints to the player about Umiko’s backstory. There were quite a lot of them, some of which seemed at least a little arbitrary.
2.5/5 - About average.

Assorted Other Things: The plot (if you can call it that) was, as advertised, slightly easier to piece together than some others. There were two endings, both of which follow standard tropes.

Overall, Usagi is a good introduction to the world of YN and its fangames for those who don’t feel like tackling bigger projects like Yume 2kki or .flow. I enjoyed it, though I probably wouldn't replay it.
3/5 - Above average.