Still Untitled is, one would think, a working title for a game, but since the developer hasn't been around for two years, and the game is listed as completed it appears that's the one it's stuck with. The name does regrettably hint at the level of polish, or lack thereof, evident in the game as it stands.

The basic premise is that the protagonist, David, is facing his inner demons, said demons have been made manifest in the form of boss level encounters and David is split into three complementary components, Mind, Body & Spirit in an effort to combat them. There is also a fourth element, ominously named 'The Other' to cover, one assumes, the ephemeral portions of the human psyche. As a concept it is interesting and has the potential to be quite complex, and whilst the developer has gone to some effort to make the gameplay reflect the conflict inherent in such a scenario, complexity is not one of the hallmarks of this game. In addition the method by which he has portrayed the conflict makes the game unapproachable and frustrating for the average player

You start the game at level 99, which is a little disappointing, though the idea of the game is to best your inner demons and become a whole person there is little sense of achievement in the steps you take. Whilst you are gifted with two rewards for each of your defeated demons those are merely objects, items that can be equipped and spells granted, there is no feeling of personal growth, no sense of accomplishment on an individual level. In a scenario where it is centred on confronting and defeating those things that plague you, you want to feel like you have grown stronger due to your struggle, not that you've simply strapped on the next weapon and gone up in stats.

Though having said that that is far from the case, most of the equipped items have a disadvantage to offset and in some cases negate their benefits. For example the bracelet of restoration, which gives you the restore skill, a magical version of dispel herb, also reduces your defence and magical defence therefore making it much more likely that you are going to be inflicted with the states that the bracelet allows you to heal. The counter-attack chain, whose ability is self evident also drops your attack and magic stat as well as your agility, which makes no sense, after all you need to be agile in order to respond to an attack quickly enough to riposte. Whilst the developer has stated that making sacrifice a part of the mechanics was one of their goals, the sacrifice needs to have a natural flow to it. A stronger weapon that reduces your defence is a tactical sacrifice since you as a player have chosen to place strength over security, or an item that grants you an ailment skill but also partially affects you with the effects of that skill allows the player to tailor their party assignments to ensure the afflicted player is protected so they can use that skill, but a piece of armour that allows you to cast a short lived protection spell on yourself whilst reducing your base defence stat is simply counterintuitive and ultimately futile. The biggest problem with these items and their sacrifice component, is you are only told of their positive benefits when you are being given a choice as to which you wish to be rewarded with after each inner demon battle. 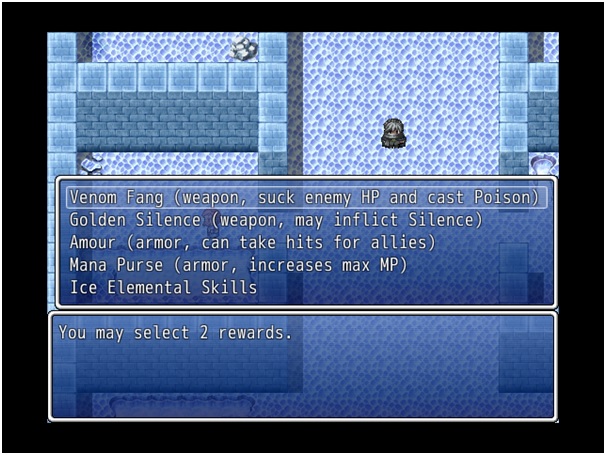 Yes, now the other shoe, please.

Given the premise I did expect some deeper revelations about the protagonist, some reason why at this point in their life they've chosen or been forced to face all of their inner turmoil in one cathartic moment. While the opening post-it note does give an indication, the pre-battle flashbacks didn't provide that. They just showcased traits that were already well established without providing any foundation for them and with no background into the situation that gave birth to that particular demon. What's more they gave a false impression of control on the part of the player as the scenarios shown are simply used as a way to drive home a single narrative, and any choice the player makes that is in contrast to that narrative is dismissed or overturned. Their intent appears to be to make the protagonist unlikable, and in that to a certain extent they succeed, but without context David simply appears as a cardboard cut out, a man who is only his demons and little else. For a game centred on internal conflict there really isn't any, other than the purely physical manifestation of it as combat. So let's have a look at that, as it is the centre point around which this game appears to revolve.

Combats are difficult, these aren't grind level monsters they are boss encounters and they are tough, which given what they represent, they should be. You can face them in any order as they are all held in a very simple dungeon type map enclosed in separate cells, simply waiting for you to notice them. So if one particular demon is resistant to your skills or strategy you can take on another in the hope of gaining something that will enable you to defeat them. Each demon has an intrinsic weakness and a particular skill that will work best either against them or for the party while fighting them, all of which you have access to from the first battle, it's just a case of working out which one applies to which enemy. In addition they all have a form of elemental weakness that is somewhat intuitive, so it's a bit of trial and error to nail down what causes the most damage and then concentrate on keeping alive those characters that can use that effect. In some cases that requires you to escape and amend your strategy by equipping something which will grant you that skill. Other than that the combat is ATB, though since the wait dynamic is on by default it doesn't feel much different to an agility based turn system. There is a dialogue mechanism in play in the combats and while I understand what the developer was aiming for by including it, it really does just get in the way, appearing over the top of combat results and options. 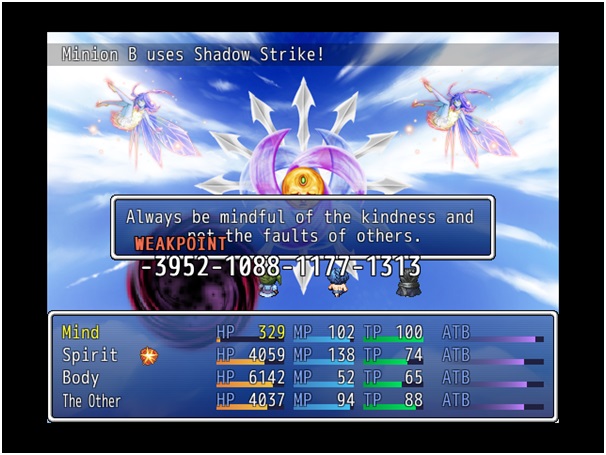 After each battle you simply move on to the next and the developer has missed a real opportunity to engage the player at this point. It would have been easy to include a post battle cut scene showing David growing and learning from the experience, and seeing him shrug off the effects of that particular demon from his persona. Regrettably as is too often the case in this game, the developer missed the boat. Once you've beaten all four of your demons its back into the starting room to face yourself and if you consider who it is you're fighting the strategy for winning is self evident, as it was the first time around. Though I will say the dynamic of the Fickle Bangles was well thought out and appreciated. Once you've 'won' the game is over with a simple single sentence epilogue that is far from satisfying.

Still Untitled had an intriguing premise, but very flawed execution. The possibilities and opportunities to have it grow into an interesting gaming experience were all available, but not utilised in a satisfying manner. I would like to see the developer take another shot at this once their confidence and game making ability has grown and their personal experiences expanded, until then it's really not worth the 45 minutes or so it takes to play.