2 reviews
An old sage prophesied that in two years, the world will face mass destruction and only one woman can stop this. Two men, ALEXANDER ASHFORD and BRUCE DUNLOP make many attempts to find this woman, met with failure each time, for the sage informs them that they are not meant to find this girl... However, one evening, the sage decides to lead them to them to the one man who is... MARCUS FORD, whose life is changed forever by the fateful meeting. Joined by several others, Marcus is forced to find the demon threatening to end the world and stop it...however...he soon learn that things are not as black and white as they seem... With the world wiped clean, every living creature on it is now on an equal playing field. Will you side with the forces of light to find the new Messiah, or side with the darkness to bring forth Azazel, the Savior of all demons? Or...will you become a rebel, and overthrow both orders? Your fate is solely in your hands...

MARCUS FORD
29
As a youth, Marcus has had trouble with the law, but he has since turned his life around.
Since he was a child, a young girl would talk to him in his dreams. Calling her his
"dream buddy," he spoke to her until his late teens, in which the communications stopped.
The mysterious dream woman now returns, warning him that the world's future will soon
depends on his hands. Thrust into a situation beyond his control, Marcus knows that the only
way he can solve this mystery, as well as to fully understand his powers, is to find this
girl.


CHELSIA ASHFORD
30
Chelsia is the beautiful, rich wife of Alexander Ashford, a well-known and respected lawyer
who's been involved in black magic. Chelsia is well aware of Alexander's quest for power,
and pretends to be oblivious until the right time to strike. Unlike most, Chelsia doesn't
fear the demons. She believes that demons are pawns, and can be very powerful allies if used
correctly. Chelsia dreams of a world of equal opportunity, a world where power can obtained
by anyone who deserve it, a world of absolute freedom. She knows this could bring about
frequent war and chaos, but she believes that war would be a great tool to separate the weak
from the strong.


ASHKII HASTIIN
35
Ashkii and and a fellow friend were raised together by Leo, a wise man who taught them the gift of magic,
and how to control it. He taught them the way of the light, and warned them that the future
will bring about great pain and destruction to mankind. Ashkii serves as his childhood friend's older
brother, shielding her and protecting her from the world. He too doesn't know his real
parents, and sees his fellow friend and Leo as his only family. Recently, Leo was kidnapped by a man
named Alexander, who was told that Leo could lead him to a great power. Ashkii desires to
continue the fight for peace until the end, believing that he and his childhood friend will soon find
the Chosen One.


NEVILLE LONDON
29
Neville serves as a link between the human world and the under world. Being a demon himself,
his primary purpose is to assist the demons into obtaining the power and the control he
feels they deserve. He walks the Earth as a man, looking for suitable warriors to help carry
out his plan. The first to catch his eye was Chelsia Ashford, a human female who was trying
to build a demon army of her own. Their similar goals led them to form an alliance. Neville
taught Chelsia her powers and everything she knows about demons. Despite the followers of
light trying to suppress the demons, Neville feels confident that the dark will finally
overcome the "righteous."

There are three story branches in the game, RIGHTEOUS, BALANCE, and FREEDOM. There are eight total playable characters, but you can only have a party of four, and the choices you make will determine who will join your party.

RIGHTEOUS: Consists of people who are holy and pure, people who believe that the demons must be wiped clean if the Earth is to retain the order and peace it once had. They fight to find the "Chosen One," one of supreme power and goodness who will watch the world and protect it, quickly destroying anyone who threatens to cause disruption.

BALANCE: A rebel, one who decides to go against both "orders." Agree that neither humans nor demons are 100% good or evil, and believe that people should govern themselves.

FREEDOM: Individuals who believe in the freedom of the demons. Worship the demon god Azazel and anticipate his return. Those who follow him will become his right-hand men and will take part in creating a world of absolute freedom where man will do as he please, where no one will be held back by the "rules" of society any longer.

Some of you may not experience this, but there was an obscure scene in the game where I forgot to delete the command that calls for "WoodsB". To be on the safe side, copy the picture in this folder and paste it into the game's picture folder:

Sorry for the trouble y'all.
Truth

Close
06/21/2008 04:00 PM
My connection is fucking around a bit so I can't watch all the screenshots or download it at the moment, but I like how in the story you can chose between three ways and not just the usual two (in the few games you even get a choice!). How will this work? If I become a rebel for instance.. will I have some kind of optional storyline then since finding that girl wouldn't really help my cause whereas the good guys would need her and the bad guys would need her out of their way? (Maybe there is a cause for the rebels to find her as well and I'm just drawing stupid conclusions based on nothing, sorry in that case :D) I also like how there is a chosen one but that the main character is not that chosen one. That's a nice idea!
I'll try going for a download tomorrow :)
Oh I almost forgot.. does this take place in a modern world? Cuz in some of the screenies that I could actually see it looked like it was, but in some it felt unclear. Anyways it looks pretty cool! Keep it up

The pathways don't become clear in the demo right away, though you do already get the hang of it a little bit. I don't want to spoil too much, BUT I will say that your alignment path determines who will join your party. Playing the demo will give you somewhat of an idea of which characters you'll get in which story path. :p
Asalieri

Close
11/20/2008 09:42 AM
I'm stuck at the naming screen. It doesn't allow me to enter letters and the screen looks like gibberish. No, no no. 20meg download for no sound and to be stopped at the NAMING SCREEN after a huge intro? NO NO NO.

Close
11/20/2008 10:25 AM
The main folder only is for people who don't feel like downloading the 70MB file all at once (if they have a slow connection). It may be faster for them to download the game in sections, and then combine them with the main folder. All three "parts" are available right here. :p

The naming screen...is bizarre, I have never heard of that error before. I'll try to see about it when I get home
Decky

The newer version will be much clearer with directions (as well have a whole bunch of other improvements).
benos
My mind is full of fuck.
559


Let me know what you think.
Jubell

Close
06/20/2012 02:21 AM
I had to stop playing. There are a lot of things in this game to like, but it just doesn't seem fully fleshed out. For example, the character Alex is supposed to be a wealthy man of means who entertains guests in his lavish home, has a gorgeous wife, and an undeniable sense of vanity.

And that barely comes through the story and especially not through his dialogue. Honestly, I thought he was a detective's assistant. He doesn't act like a man accustomed to being in control or even a man that's "new money". Had we understood his character from the beginning the context would have been much clearer. In fact all of the characterizations are there but come off as flat in the end.

I think I kind of understand what you were going for, I liked several of the world elements, although why demons were running around a rich man's home confused me to no end (were they pets? Why were they there? In a normal RPG we understand that monsters are in a dungeon because it's a dungeon, s'okay. Here, I didn't understand the reason). I like the concept of the essences and especially the idea behind Awakening (it was very logical).

This felt a bit like a comic book from Image and had the same rushed feel. But you have time to settle down and let us explore the world. You don't have a page count on this or have to make room for ads.

I really did want to like this and get through it because even the concept of stopping an apocalypse was engaging - but the story is missing a certain spark that's hard to pin point (although the music, maps, and tone are all well done)
Yeaster 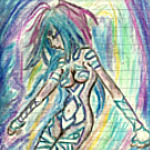 Close
01/27/2013 12:11 AM
Wow this game looks interesting (is watching on youtube), I love your cut scenes and indoors game design, but the character sprites could be a little more unique. Anyway how much are you going to charge for the game after its done?
Yeaster

Close
11/29/2013 07:09 PM
played about 10-15 minutes of it
so for now
i prefer eastern style characters rather then western style(Japanese>American)
i don't mind realism with Gear/clothing ect but i like more fantasy feel then reality
of course that does not mean its bad its just personal preference.

2.a option to skip the intro would be nice,i thought it was going to be a visual novel and was gonna quit lol

3.does this game come in full screen mode?when i try it stays small in the center and F5 which is a fix for some games actually makes it even smaller!

^i dont know alot about this
but when making a game i think i heard their was some way to set screen resolution settings.
ive never made on so i have no idea :3
the normal size for a game was something like 440 by 520 or something id have to look it up
in VX Ace case its 544x416

or maybe its done with a script
the games playable as it is but it gets stressful on the eyes with smaller text and everything :3
===
4.the text menu the selector needs a better color lol its very hard to see since its almost the same color as the backround :D

6.
Glitch
Show
going inside Hawks store(top right of the city) after miss ashford told me to come by this happened :D

the screen stays black but you can go into the menu,when you leave the menu this glitch happens
i tried it 5 times so its confirmed :3
after the scene where chelsa tells you to go to the demon bar hawks shop works again! :D

7.as a preference having a area wheres theirs always enemies would be a good idea,i grind alot in the areas so ill be fine but if a person needed to buy heals and equipment they could be in a pinch :3

8.pretty cool theirs a few recognizable characters around the city like cloud and snake
they dont fit in with this at all but interesting addition :D
Pages: first 12 next last