I'm envious...
Not because this is another good game (well... demo but of a good lenght) made by Yeaster, the last one I played and, sadly, also an incomplete one. But do not worry there's enough to play and to enjoy, and I liked it.

I'm envious because, if I remember well, this game was inspired by a Killer7 rpgmaker fangame that Yeaster played ages ago, and sadly now it's impossible to find this game.
I tried for 2-3 years...
Pity...
Anyway we have Vanity!

The Good
Vanity apparently looks similar to the other games made by Yeaster (that I already reviewed): modern horror setting heavily inspired by Shin Megami Tensei, a cast of many varied characters, dungeons with avoidable opponents and bosses.
Ok so what's new? Well the cutscenes are (like those of the Killer7 fangame I mentioned earlier) not made on the maps with the game graphics but with images and pictures from various sources (the game Shin Megami Tensei, anime, comics, etc). Despite the low resolution of Rmk2003, I liked a lot this choice because the images are supported by an excellent choice of music and sounds (like rain and thunders in the intro).
This is style! 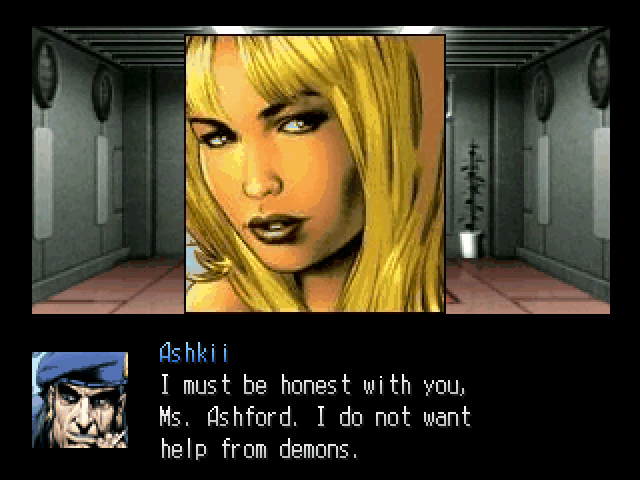 The rest of the graphics are the usual charsets and chipsets also used in Onyx, but here mapping is surely a bit better and chipsets are more coherent. I like that there's still the possibility to save anywhere and you'll also find some healing spots often strategically positioned before the end of the level and the obligatory boss. Wandering monsters are totally optional (like in some other Yeaster games like Mistery Man Zero) since you can repel them at will, but it's better not doing that or you will be undervelled when you reach the boss.

Ok what about combat? Usual side view with battlers. Enemies are mainly demons, monsters and other beings coming direcly from Shin Megami Tensei (no surprise!) and characters have different attacks and skills. Ok nothing new here!

The story is in my opinion pretty good and interesting as it deals with the end of the world, prophets, demons and a dark modern setting. Original choice, even if this is what you can expect from a game made by Yeaster. I liked the idea of the "alignment" that Marcus, the protagonist, chooses depending from the different answers he gives in some crucial points of the story.

Just another day fighting demons in a dark dungeon with friends!

The Bad
Ok, this game isn't without flaw. The first problem is that this is a demo. The second is that it's a typical Yeaster game so this means dialogues, dungeons, bosses and nothing else. Really. But the story was what made Onyx and sequel great, and here is the same with the addition of nice cutscenes and really good music choices.

Verdict
Vanity isn't very different from Complete Chaos (that features the protagonist of Vanity as a guest character), Mystery Man Zero (that had better maps and facesets) or Onyx 1&2. Clearly there are many improvements in almost every department, but the base gameplay is still the same. It's simple but well done and, as usual, you have a strategy guide included if you find any problems during the game.

This is in my opinion an ok game with stylish cutscenes, great music (I especially like the main menu and battle themes), and an interesting alignment system. While the rest is not overly original it's still well done and without bugs or other nuisances. If you liked Onyx and sequel you will like this one too!

author=Yeaster
Thanks for the review! I feel like releasing a newer one soon...

Hey happy to see you still around here! The source of inspiration for this game was good, and this game is good too. I love the "urban mystery/horror setting" (especially when inspiret to SMT and K7)that few games recreate with an original (or weird/surreal) style.
Hope to see something new (even if I've still to try all your old games!)
Pages: 1