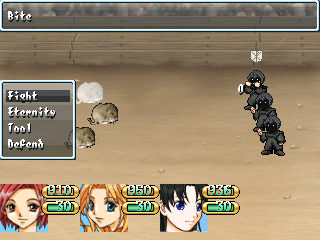 No more Reflect. This is shield, and it works by blocking physical attacks.

Close
07/29/2013 09:25 PM
We've got a weird battle system now. All physical attacks are actually Switch skills that do custom damage. Combined with tracking for attack/defense, it's now possible to make variables say "Okay, character 3 blocked, reduce damage by 1/4 for physical." Since this is the case, I can make a status that completely removes damage. It also can miss, including a custom battle animation (text is sucky Times New Roman since I made it in like 5 min though).

Reinventing the wheel, all so I can get custom miss chance and custom animations.

Close
09/12/2013 12:18 PM
It's because for some stupid reason, RTP didn't seem to have a simple rat picture (they had cats and bats but no rats). And I needed one right off the bat, since the very first scene of Oracle of Tao, the hero fights rats off since she homeless. Because my own art clashes even worse than a photograph (all I have to work with is colored pencils and cray pas), I cut it down in size and added a black outline, but yea it's essentially a photo.

This is a recurring issue, so unfortunately it carries over Tales From The Reaper as well.
Pages: 1