Take Down : The Panda of Truth

Hello,
welcome to a new review and this time the game...
Wait a second!
Dudesoft, the developer, is a familiar name... and also Take Down gives me a feeling of deja vu... then I realized! Take Down: Narwhal of Doom wa a game I reviewed many months ago (in 2020! YEAH, right this means two years ago! Check that here! And play the games, of course), and well, it wasn't a game I really loved since it was more like a sort of situation than a real adventure: the game was set inside a single room and we kept changing perspective as the playable character changed.

Anyway we're not here to talk about the Narwhal, this time the animal is the Panda! Take Down: the Panda of Truth is the story about... a panda? No wait, the protagonist is a bald brawny man, ̶D̶o̶m̶i̶n̶i̶c̶ ̶T̶o̶r̶e̶t̶t̶o̶ (sorry, that guy is really similar to Vin Diesel) Canaan, a guy full of muscle and vengeance that is going to Castle Damian to join a mysterious organization, BUT things will never go as planned, so expect angry dialogues and furious battles. 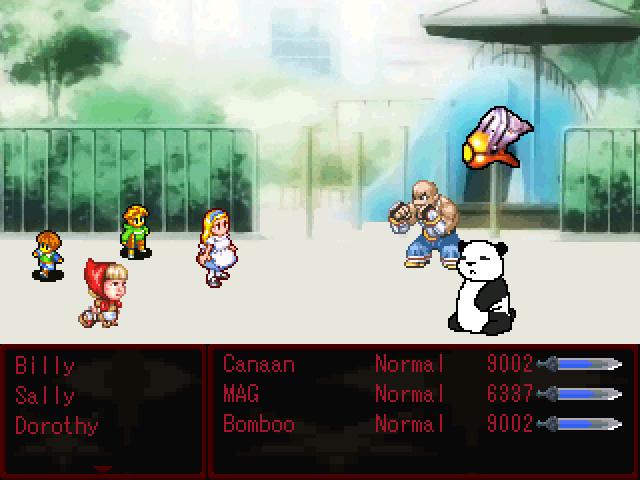 The (not so) heroic trio faces a group of (not so) dangerous opponents!

The game is notable for an interesting gimmick: while we normally play as Canaan as he walk around, examine things, read books, etc., during combat things will be different: we do not control the big brawny guy, that is able to deliver powerful attacks with a sort of chainsaw, but we'll play as MAG, the robot companion.
This support character will have to babysit the rest of the party, shifting between three modes: Attacker, Defender, Healer. Each mode has different abilities, Attacker has a couple of attacks (duh) and the ability to empower the allie's attacks, Defender is able to protect and make allies reflect the spells to the caster, and healer... well that's the classic equivalent of the cleric character, able to cure and resurrect character.
The player is able to switch among the three different modes, and most important things, this helpful support robot can also recharge power, so no need to use consumables as it can recharge by itself. Cool isn't it? So our role is to supervise the battle while Canaan attacks relentlessy like a maniac, berserker style.

Speaking about Canaan he does about 500 or more damage points each attack, has about 9000 health points (the robot is a bit weaker), so yes, big numbers! The Panda (of course there is a Panda!) that later joins the team is a bit weaker, but stronger then MAG, and he attacks twice.
Anyway combat doesn't drag for long and also is not that difficult at all, especially if you take the time to fight the optional battles that will provide extra moves and chainblades (no level ups or money and consumables, but trust me, there is no need for them), making the game even easier.

Visually the game takes sprites from many different sources: Metal Slug, Romancing Saga series, Tales series... and many other sources, something I couldn't recognize. But there is also space for some custom art, like the portraits/miniatures of the main characters that appear during the dialogues.
Mapping is for the most part quite good, I mean it's really a lot better than Narwhal of Doom, even if there's still a good quantity of weirdness and bizarre locations (and situations), typical of the Take Down Universe. Oh and the intro is simply epic, I absolutely loved it both for visual and music choice (that is also used in the finale)! I also liked the music in the outdoor area and the sounds... the reference/parody of He-Man and the Masters of the Univers made me laugh! Really well done! 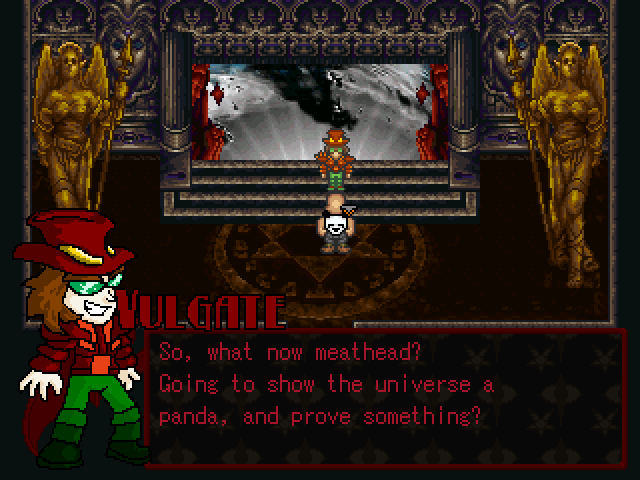 Final Verdict
This Take Down episode is very fun, better and longer than the other one I played. He made me even more curious about the series, and aside for a couple of typos I found no errors or problems. Game is about one hour long and it's quite easy: combat encounters can be won easily thanks to the Magic Shield that reflects the attacks to the opponents, then it's just a matter of time and you will prevail. And hopefully you will have fun too, the story is wacky, game is both dark (you can become a mass murderer and even kill Satan) and hilarious. I do not mind it being short since there are other episodes of this series (apparently this wasn't the last one), since it was an hour of good time. Really. What will await us in the next episode?
I guess this is a tale for another time!

author=Dudesoft
Hey thanks, man. Appreciate the review.
I forget the details, but this one, (and Lambs of Destiny, and Narwhal of Doom) was made for a contest. It was a lot of fun to work on. It and Lambs are probably my favourites in the series. Take Down Legacy ep1 Remix a close third!

Ok so looks like Lambs will be the next one! Anyway this was very good, I liked especially the idea behind combat. Pretty unusual
Dudesoft

Close
05/11/2022 12:20 AM
Hey thanks, man. Appreciate the review.
I forget the details, but this one, (and Lambs of Destiny, and Narwhal of Doom) was made for a contest. It was a lot of fun to work on. It and Lambs are probably my favourites in the series. Take Down Legacy ep1 Remix a close third!
Pages: 1