All of us know that telling scary stories around a campfire is part and parcel of the camp experience, whether that is a family camping trip or one organised via a school trip. In this game that telling of a tale is transformed into living through it. Spawn is a young man with an embarrassing and invisible father who is off on his first overnight trip with his school friends, though of course he first has to go through a prophetic dream on the night before. Hey it is the developer's first game after all, it has to have heavy handed foreshadowing. There's a head on the bed! Oh wait that's Spawn.

So after meeting up with his friends on the coach and falling asleep on the shoulder of the girl who has a crush on him Spawn arrives at the cabin in the woods where the school camp is meant to take place. However it seems there was a problem that happened whilst he slept and rather than arriving with enough time to set up tents the students will all spend the night in what has to be the largest cabin in the woods I have ever seen. A dormitory is one thing, but this two story edifice with 80 beds in it without a bunk bed in sight, a refectory capable of feeding over sixty people in one sitting and an adult's retreat complete with media section, library and double beds is a little ridiculous.

I do have to take a moment here, it's pretty obvious from the long cut scene that makes up the game thus far that the developer's first language is not English. There aren't many spelling errors, but a plethora of catachresis which sometimes make comprehension a little more difficult than it needs to be. I would suggest that the game gets a look over by a native English speaker to clear those up.

Since I'm digressing from the story at the moment I should also discuss the other aesthetic elements in the game, namely graphics and sound. The taller character sprites were developed via the looseleaf online generator and they work really well in the environment. It would have been better if the developer had made more than three male student sprites, one for the main character, one for his best friend Miguel and one for the other 38 boys on the trip. The girls don't fair much better there is also three options there, one for the girl with the crush, one for the red haired exchange student and one for all the rest, but since the interaction with the generic students are kept to a minimum it's understandable. The tile set is from pixelart world and like the sprites is used pretty well. The music is also an interesting mix of atmospheric pieces, though like the polt are a little heavy handed in some sections, though I do have to admit a personal liking for DJ technika's version of Tchaikovsky's Swan Lake. 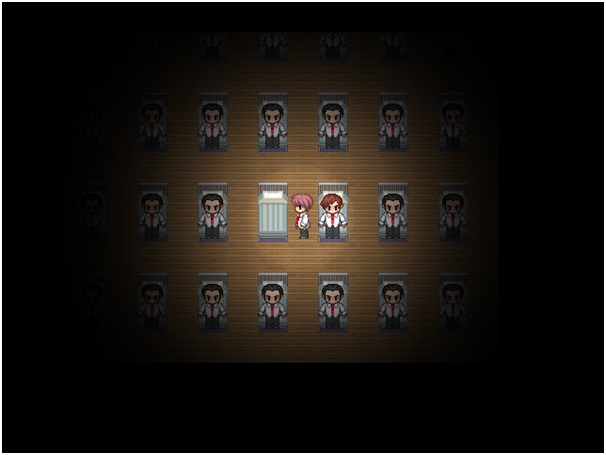 Bring on the clones.

So after mysteriously waking up in the middle of the night when all of his chums are still happily in the land of Nod, Spawn heads out to find out what woke him up rather than doing the sensible thing and just rolling over and going back to sleep. Outside he finds an oddly serene landscape, deep green grass, lots of lush trees, prettily displayed rocks but no sound, no chirping or rustling in the undergrowth. He wanders away from the cabin still in search of whatever woke him from his sleep and then we get our first real horror element, the obligatory chase scene. Hopefully you paid attention to the prophetic dream from earlier otherwise you're going to end up running the wrong way and it'll be game over as the shadow takes your life. If not you escape your pursuer but end up in a slightly different landscape, transported by the handy glowing pentagram not to some other place so much as another version of the same one, the same verdant surroundings, but this time with the sounds of forest life all around you, and also a hidden damsel in distress to rescue.

So with the horror elements ticked and a quest to fulfil we're on to the puzzle part of the programme as a trip back to the cabin reveals that all of your classmates are apparently gone. The reaction from our protagonist is refreshingly realistic, he's pretty much of the opinion that something weird is going on and would very much like it to stop happening. However since no-one else seems to be around to solve the mystery it's up to him to do so.

There are some very obscure clues provided in the game and the first and most important is the most obscure which is a problem because if you don't crack that one you can't get access to any of the clues that will enable you to solve the others. 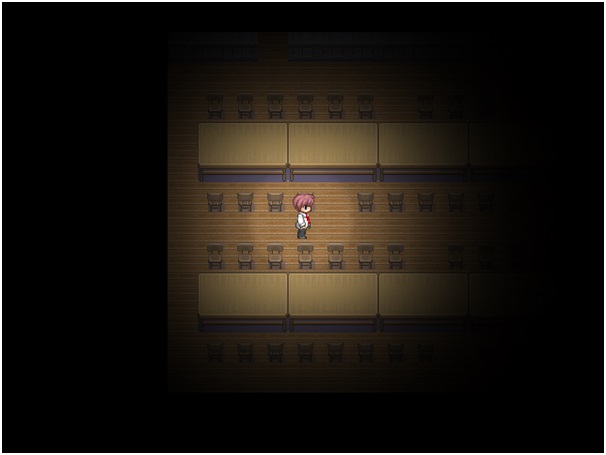 Believe it or not, this is the answer to the first riddle.

Now whilst I like a head scratcher as much as the next person, making the first puzzle out of the box obscure and almost impossible to decipher is not a good way to ease your player into your puzzle solving style. Though on the plus side it did make solving all the others that cropped up somewhat easier since you knew that all of them were going to be heavily math based solutions. So after you've made your way into the locked cabinet in the refectory (though only the first one, open the other and you'll soon be shadow bait) you'll find a strange recipe and the game for a short while turns into a fetch quest complete with a multitude of shadow chasing scenes just to keep you on your toes, but they are very predictable. When you find an item you need you'll get chased so make sure you pay attention as to the fastest way to the exit in each room before you try grabbing anything new.

The strange brew allows you to rescue Revene, the red-haired exchange student. From that point on thing get a little odder, and that's saying something since the plot thus far isn't been clear in any way. But with the two of you working together you at least feel like you're making progress. Unfortunately soon after you have joined forces with the girl who seems to have some of the answers you run into a game breaking glitch, and the thing that is most frustrating about it is that it's obvious this is the last sequence of the game. After you've found the 'source' and destroyed it you are given two minutes to escape the cave but the movement route the developer has set means you are stuck behind a stalagmite and cannot move. Therefore the clock runs down and you get a game over without the ability to test your memory to find your way out of the cavern.

Given the fact the game raises a few questions as to just what is going on and the role of both the protagonist and the strange girl who aids you not being able to access the last sequence and see the resolution is very disappointing. There is little chance that this error will ever be fixed as the developer has abandoned any updates of the game due to real life complications. It's a shame since I would like to have seen what the developer's final vision was for this interesting if ultimately flawed game.