Hello players!
Today let's play another demo, it's a game formerly called "Legends of the Roguelike" that was renamed "Deep Souls" to underline the fact that this game is inspired to that popular action fantasy game that is Dark Souls, made by FromSoftware in 2011 (even if it was anticipated by Demon's Souls in 2009). Deep Souls is instead a Rpgmaker2003 game by Conmon, whose last demo, the one I'm playing today, was released in 2014.

In Deep Souls, just like in Dark Souls, we play as a lone hero, and we get to choose name and class (warrior, rogue, cleric or wizard) before entering a catacomb where not one, but TWO terryfing evil beings are located. And a lot of lesser monsters besides them are also roaming the dungeons, but there are also treasures so it's worth exploring the place. Or not?

For my playthrough I decided to play the warrior, anyway I must admit that the rogue seems particularly interesting for the ability to unlock closed doors, since some areas and locations weren't accessible for my hero, but I guess I just missed some gold and items, and nothing really important since I was able to reach the end of the demo. 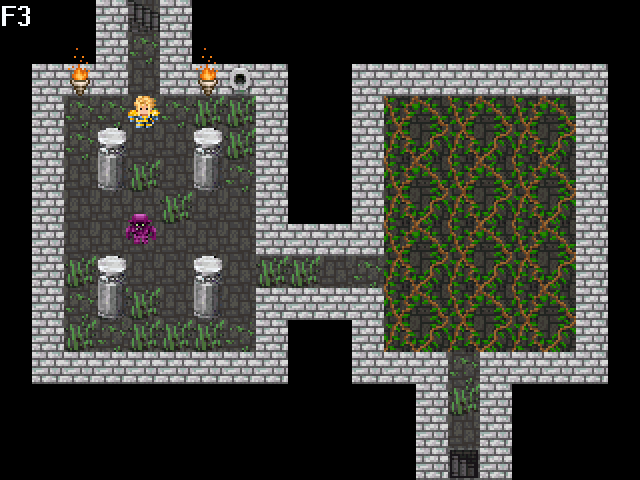 The purple guy is obviously an enemy, but see the room with the vines? That's an unsafe area where you can trigger random encounters!

This game is basically a classic dungeon delving adventure, but does it uses random encounters or wandering enemies that can be avoided? Well... BOTH! But wait, the system is interesting: most tiles are safe, so except for meeting wandering enemies (that respawn) you will be safe. BUT some areas, whose tiles are covered by vines, hide creatures, so you can trigger random battles when you walk over these particular floors. But these are just some of the menace encountered, there are boss opponents (of course!) but also mimics, those classic creatures from Dungeons & Dragons that can disguise as chests.

Anyway not everything you can find in the dungeon is dangerous: there are other adventurers, Npcs of various classes that can provide useful items in exchange for some gold or treasures found there, but they can also give some quests to our lone protagonist.

Yes. For all this game we will be all alone in our quest (just like in Dark Souls) against many opponents that sometimes can attack in superior number. The only way to succeed is using the various skills that are learned as our hero gets new levels, abilities that costs energy points, that have to be recovered using potions exactly like the hitpoints. I do not know the other characters, but the warrior starts with a cool move that's a weaker attack that hits every enemy, and has its uses! 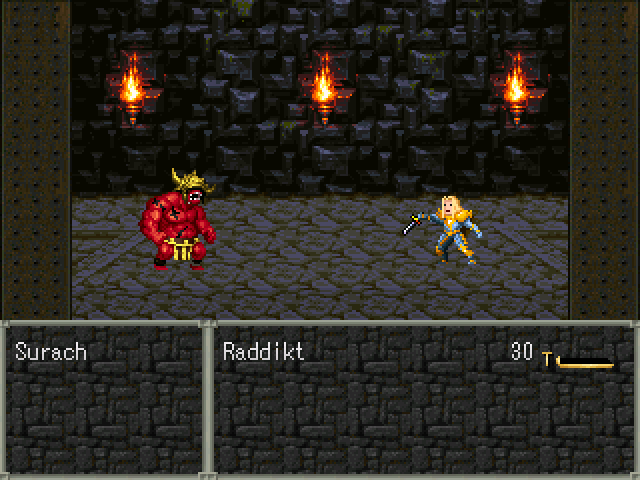 Surach is a big talkative fellow that's not really hard to beat! But he's just the first of the bosses that you'll find in this demo!

Anyway if you played Dark Souls you probably know where the hero can rest! Yes, at the bonfires! Here they act as save points, healing points, respawn points and places where the souls released by some enemies can be exchanged for some really good consumables. The dungeon also includes secret passages that lead to extra loot, so explore every corner and every place!

Now the visuals. The game looks really good, it uses some RTPs sparingly (the torches, the chests, and few other assets that were edited, like for example the stairs) while for the most part it's a really nice pixel art with two distinct visuals: the esploration part recalls the visual style of Zelda or Final Fantasy 1, with little characters in spacious but detailed rooms and corridors of the dungeon, and then the classic side view battle setup. Anyway the custom made sprites and battlers (that are also used as facesets, even for those characters that do not take part in battles, like the Npcs). Oh and if you look in the folders you will also see many pretty but unused cutom made monsters in pixel art.

Music is likewise good, nothing exceptional but fits the setting and is varied, for example I liked the difference between the calm theme of the safe areas (with the bonfire) and the more dramatic melodies of the places where you can meet enemies. 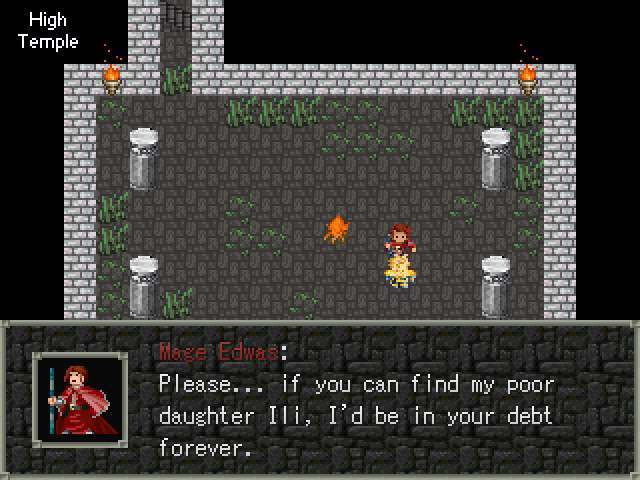 In the dungeon there are also some Npcs that can provide equipment (for a price) and also quests!

Final Verdict
Deep Souls is a little cool demo. If you lie to yourself and consider it a complete game, it's still good, I mean in few time the game throws a lot in terms of enemies, exploration and a couple of quests. There are also some bosses that are optional (and a couple of them are also quite talkative!), but the final enemy will even mention if you killed them, and the difficulty is quite well balanced, even if you may grind a bit and make every encounter too easy. The only problem I found is that one of the bosses is referred first as Gashur the Bold, then Lorzog the Swift, and then as Gashur the Bold! Probably he was renamed but the old names was left in a dialogue, in any case it's the only problem I found with this game. For the rest, absolutely nothing bad, on the contrary I wished it was longer.

I rarely encourage to play demos, but if there is one I can recommend, well this is it!