Nightmare of The Snow 雪の悪夢

NoTS' sequel demo has been released!

Nightmare of the Snow's sequel, Restless Dreams, has its demo released yesterday! :D

Update July 11th, 2015, v1.20:
-Proofread version (thanks to HAMS, Yudonomi-stuff, and Fuckyeahpixelhorror)
-Added 2 new death scenes
-Fixed the bug when you're entering chapter 5 with Taiga already died before
-Increased the difficulty of Kayako's chase scene in chapter 2
-Changed the True End's post credit scene
-Included the NewGame+ password in the post credit scene
-Made it easier for player to beat the game in the second playthrough by skipping several quests
-Added a new room in the hotel
-Added a new RPG game reference in chapter 1
-Added several in-game credits in chapter 0
-Increased the text speed a bit
-Changed the cursor SFX
-Added a new splash screen

Currently, I'm working on my next project: Restless Dreams! It is a sequel to NoTS!
Be sure to follow it at http://project-grayrpg.tumblr.com/ :D

I've finished taking care of the bugs that will prevent the player from proceeding further. Again, I'm sorry for the bugs.

In chapter 1 there is a major bug when you switched character. The bug won't allow you to progress further unless you've played the demo and have the chapter 2 save since this will skip the bug.

I'm terribly sorry for this issue and thus I'm going to put the download back to the demo for now to avoid further problem. Really, sorry.

Hey, guys! Nightmare of The Snow has finally been completed!! XD

Only two endings left to develop. And after that, I'm gonna betatest every ending.

And after that? FULL RELEASE!

Longtime no see, guys!
Soon, Nightmare of The Snow will be completed.
All left to do is to create the final scenario and the endings (which is very complicated to do, since there's many ending I'm going to make.)

I don't know whether if I can finish it by 31st December or not. But for sure, it'll be released soon.

That's all I can say for now. Be sure to look forward for the game's completion :)

In two weeks, hopefully, the chapter 4 of Nightmare Of The Snow will be completed. However, this time I won't be releasing it publicly.

Only several people will be chosen to have the demo. Once chapter 4 is completed and uploaded, I will send a link to the beta tester I've chosen.

Chapter Four's sneak peek! and Nightmare Of The Snow anniversary!

It's been a while, people :D
And guess what? Chapter four is on 65% progression!

and not only that,

I can't believe it that this game has been on development for more than one year!
The game's been through so much changes from the original concept over the year...

Well, enough of this anniversary stuff. The game is not completed yet!

As for the progress, it's been slower than ever since my laptop died...damn... :(


Anyway, I'm going to give a little sneak peek on chapter four:
(Do not read if you hate several spoiler!)


-Yukiko will be your main character throughout 80% of the chapter.
-The chapter will reveal almost everything about what happened in the past.\
-One of the main characters could DIE on the beginning of this chapter.
-Less scarier...?
-New window design!
-More storybased gameplay than all of the previous chapters.
-More dramatic...?
-New save point!

Well, no story spoiler, huh?
But that's all I can post right now :D

Oh, I've made another promotional artwork for the game XD
This: 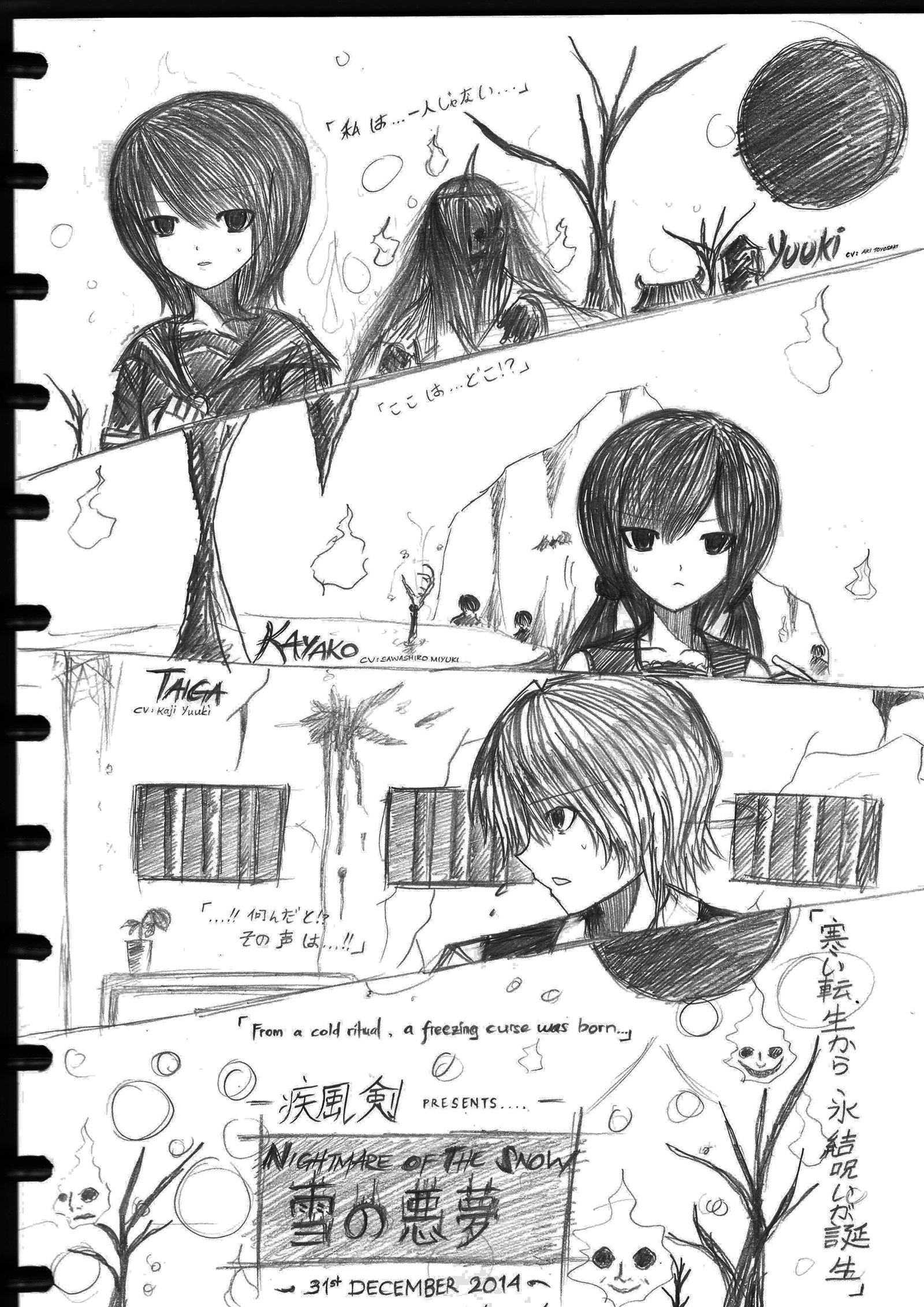 Until next time, see ya!

The screen is all blank. When I connected it with my TV through HDMI cable, it actually appeared during the boot up. But when it entered the login screen, the whole screen corrupted like hell.

My friend told me that my laptop has gotten too old. My parents bought it on my birthday over three years ago. When I looked up the average lifespan of laptop, it's about 2-4 years.

So, I can't develop normally. I've to borrow either my brother's laptop or my father's PC. I have to wait until next year to get a new one.

Don't worry, I've backed up all my file in the last minutes of it's life.

I hope that you all would understand if the game's completion date missed a lot.