Hero: The Princess Pursuit is an action RPG by limsoonchiong where you play as Hero who is trying to rescue his princess from the Dark King. The game is pretty light-hearted, and doesn’t really take itself (and its cliches) seriously.

The game plays like a standard action RPG with the keyboard as the main input device. The world map is a series of levels you must complete to progress. Each section of the world map seems to have a theme, the first one being some sort of mushroom forest (or forest overrun with hostile mushrooms at least). There is also a “Flying Mall” with an inn, pub (where you can hire recruits), magic, item, weapon and armor shops. Hero has a special item that he can use at any time to take him to the mall. 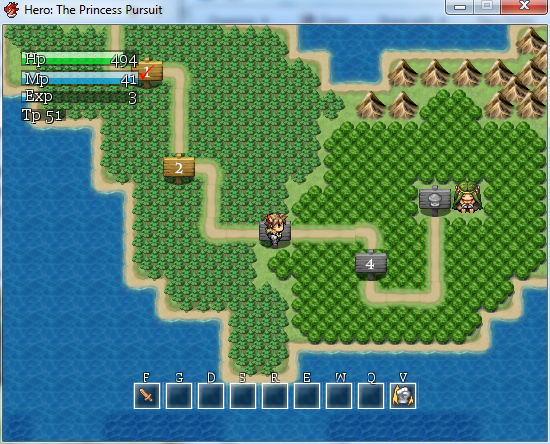 The controls were pretty easy to get used to. F is for your main weapon, G for your secondary weapon with the rest of the slots for items and magic (except V, which allows you to tell your party members to attack).

The game starts off with Hero and Princess chatting when The Dark Lord appears and kidnaps Princess. He then transports Hero to a small clearing in the forest with some cows. You soon learn from the omniscient narrator “Creator” that you’ll have to rescue the “Spirit Forest” from the Mushroom King in order to learn your next steps.

After you rescue the “Spirit Forest” you receive a grappling hook type item that allows you to pull yourself across obstacles and up cliffsides. It comes in handy, but one thing to note is if the party member who has the grappling hook equipped dies and you don’t have any items to revive them, you can’t use the hook. This actually burned me at the end of the Desert themed section. I had defeated the giant worm, but Hero died along the way. I needed the hook to move from the dock to the ship, where the portal that would warp me out of the level was placed. I didn’t have any revive items equipped on the wizard, so I decided to go to the Mall. After reviving everyone and spending some time in the inn, I came back to the level I warped out of and was stuck. It seems the level restarted itself, so the portal was no longer available and I could not move. Luckily, after I restarted the game it seemed to warp me back to the main map this time. I still had to defeat the worm boss again though.

This is probably my biggest complaint about the game. If you leave a “level” (i.e. not from on the main map) by going to the Flying Mall or entering a cave, you come right back to that level like you just entered it when you return. I think it would be better to take you back to the main map after visiting the mall, no matter where you were when you invoked the item. While I appreciate the ability to repeat the normal levels to gain gold and XP, I feel like the boss levels should stay completed once you’ve completed them. 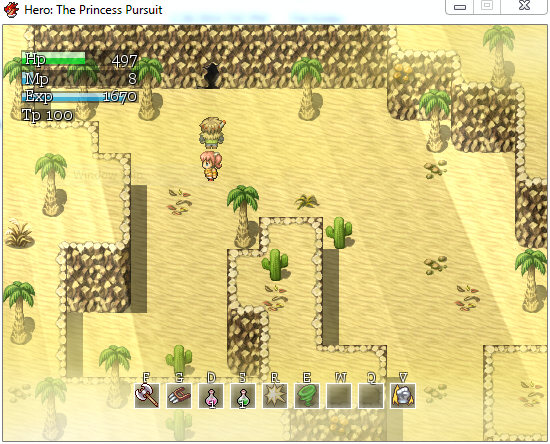 This cave is evil. Don't go into it after you've cleared the level unless you are prepared to clear the level again...

As far as the “evil cave” goes, it would also be nice to use whatever variable / switch is set after a level has been cleared to prevent the level from resetting from anywhere but the main map.

The graphics seem to be a mix of default VX Ace RTP and some RMW custom content as far as I can tell and I didn’t notice too many, if any, graphical / tile glitches. Plus, there were some cool "fog" type effects (sandstorm, snow, and well, fog I guess!).

The menu system can take some getting used to. The ESC key brings up the standard RM menu screen where you can use special items (not potions or anything like that), equip armor, and save the game. In order to use normal items, you’ll need to equip them using the menu that is invoked by the N key.

A little issue that appears when you have more than one party member and go to use an item is that it always seems to target your secondary party members by default rather than the main party member. You’ll want to be sure to pay attention to make sure you are healing the right party member. It's also a bit difficult to keep tabs on your other party members health because it only shows on screen when they are attacking. Sometimes I would forget to hit the V key to make them attack and they would die pretty quickly. I know it would make the screen pretty crowded, but it would be nice to be able to see everyone's health all the time.

The last issue I wanted to point out was the grammar / spelling mistakes. Several of the items are spelled incorrectly (Leather Hap instead of Hat, Excellent is misspelled on one of the menus, etc. ) and there were a few grammar issues in the dialogue.

Overall, I found the game to be enjoyable and would recommend it to fans of action RPGs.