A Game About Young Gods

Intro
Legends Of Illarion 2: Sins Of The Gods is a prequel to Legends of Illarion, which tells you about a story of people who have to slay some evil entities and becoming gods themselves. Although this is a prequel, i don't think you have to play the first game in order to understand the game. In fact, i think that it'll be better to play this game before the first one because this game ends in some sort of a cliffhanger (that will be concluded in the first game, i think).

Music
There are a lot of musics in this game. I actually love all the musics that the game uses, with the exception of the music on the fight with the 11 dragons, because it doesn't feel like i'm in battle at all.

Lastly, i also like the voice that the character makes whenever they cast a spell. It's such a simple and good addition to the game.

Graphics
The mappings are decent. I like how the dungeon design are not too simple and yet not too hard, with the right placement of monsters. It's quite a shame that you can't enter most houses and there are some house that has no doors though. I also like how the dev put the character's image on the main character dialogues, with their expression changing based on the dialogue.

Lastly, i want to say that the game has a lot of beautiful backgrounds.

Prologue aside, the game has a great story. Not because of its main story (because it's mostly the same repeated thing from the start of the game), but because of the backstory of each character and their dialogue. There wasn't that much interaction between characters in the first few areas (because there aren't that many characters to begin with), but i enjoyed the NPC dialogues. 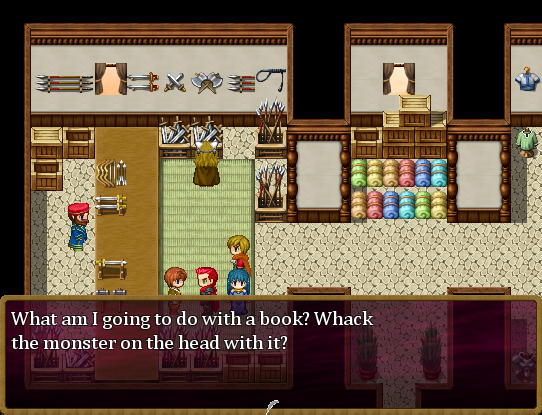 Yes, make sure you bring the thickest book you can find with you.


I'm also quite surprised with the number of main characters in the game, especially with how the dev divides their dialogue portions. I didn't feel like some characters are having less dialogue than others and i can see their personalities from their dialogues very well. I also like how they have their own backgrounds and problems, and how the game doesn't only concern about the first few main characters of the game.

The game
The game starts with 2 characters in total, and you'll end up with 11/12 charaters at the end of the game. Yes, there are a lot of characters and you can only choose 5 as your main, but you don't really have to worry because unused party members will still get the same exp as the ones that you use. All characters can use one out of two weapons types and melee fighters can learn different skills based on the weapon that they use.

Speaking of skills, you don't learn skills based on level up, but you'll gain SP on level up that can be used to learn skills. New skills will be unlocked after you reach certain level and some skills can only be learned after you learn the weaker version of the skill. There is also a skill that you can obtain after you equip a certain accessory near the end of the game. If you want to try which one is best for you (and your party), there is also reset a button to reset all SP in one character for you.

There are a lot of weapons that you can use on your character. What makes these weapons different is that you'll get a stat raise based on the weapon type that you use. There are also ultimate weapons that are specifically used for a certain character. However, there is only one ultimate weapon type for each character (despite that the character can wear two different weapon types), making it seems like you're forced to use certain weapon type on a character. I also find it weird that Adron's strongest buff skill on sword weapon only buffs one ally while the knife weapon buffs the whole party.

There are a lot of "harvesting" tools in the game that will let you harvest stuffs from the wild. You need to look out for the items though since there won't be any indicator of the harvested items unless you are one tile close to it. These items can be used for crafting. However, i find that crafting is useless. The items aren't that great compared to the one that was sold in the shop later and you won't have enough materials to craft the items at the start. To be honest, i completely forgot about crafting until i reach the last town. I only use crafting for crafting a +STR -INT charm (i'm also wondering why there's no -STR +INT charm though) and the halfling cloth that lets you regain some MP per turn.

The game has no random encounter and it uses turn based battles. I had a problem since you can't recover MP without items at the beginning of the game, but there are plenty of items that you can use (also, money is very easy to get anyway so you can just buy them if you're short of healing items). The MP thingy will resolve itself later on since there are magic that can recover MP and reduce MP cost; with both of them on, you don't have to worry with your MP anymore. 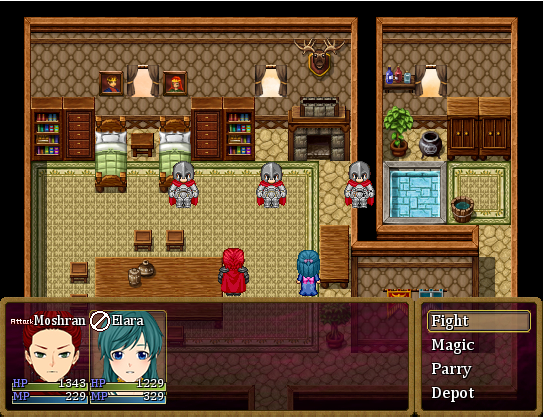 
There are 4 main boss fights in this game. I usually use the same strategy on the bosses though, so it gets boring when i have to fight the 11 dragons in a row because it gets repetitive. I also like the idea that's forcing you to use certain party member during the final boss because i end up knowing some of the character that i never use that way.

The game also has some puzzle in it. I only find a trouble in solving one puzzle (the one with red, green, blue statue) since the others are quite easy to solve. I admit that i cheat a bit on the memorizing one though (the diner table one in the castle). You also can skip the puzzles if you're stuck.

The game has a pet that can help you in normal battle. This pet can be fed to increase its attack and it will randomly appears at the beginning of the fight to reduce all of the enemies' HP based on its attack. I find it amusing to see the pet shows up.

The game also "lags" a bit in non-dungeon areas (the town and the overworld before the final boss). I think it's either because of the special effects or the big map (or both). I wish i can turn the special effect off in the options to check if that's really the case, but it's not in the options. Luckily, the "lag" isn't that bad so i don't really mind.

Lastly, the game uses different terminology for the menu text. I was quite confused when i used the menu for the first few times.

Pros:
- 12 playable party members, with 5 main member in a party
- Learn skills based on your choice
- Unused party member will gain the same exp as main member
- Puzzles
- Pet

Conclusion
This is an enjoyable RPG game to play. The game is not grindy and you can customize your own party based on your liking. The bosses might be a bit repetitive, but there are not a lot of bosses to begin with (except for the 11 dragons that i believe that can be skipped).

pss: i didn't think that i'll use so many transparent colors..

Close
04/03/2018 04:56 AM
Thank you so much for your review and feedback, aquatorrent! I'm glad that you enjoyed the game and I'm so happy to see the high rating you gave!

I'm pleasantly surprised that the large number of main characters worked out alright for you, since I knew it might be a bit of a weak spot, with some of the later characters not getting enough screen time.

About the crafting, that seems to be same opinion that others have had too, so I guess I will need to try and work on improving that some more. There actually is a -STR +INT charm though, in the needle/tailor section of crafting,

I'll look into seeing if I can improve some of the boss fights too. Sirani's healing might be a little too good. Thanks for the feedback!

For the location of the momentos and chronograph fragments:
Show
-The 4 fragments are given by the dwarven king, one halfling elder, one elven elder, and treasure chest (near the Camping Tent) at the Tower of Magi.

-Then take the 4 fragments to Truewatch Ruins to access a new dungeon where you will find Moshran, Elara, and Nargun's momentos.

-Cherga's momento can be found in the Gloom Cavern near Salkamaria (Adron's kingdom). You can access it after you beat the bosses at the Haunted Castle, who dropped the Gloom Shards.


you're welcome! thanks for making such a good game too.

to be honest, i don't really configure my party that much. i just put all of the MP based character to my main party and it somehow worked out. Melee fighters tend to lost their charm to me because they lack AoE skills that's quite convenient for random encounters. plus, they also have lower damage in their single target skills compared to the MP based ones. i might be biased on this though since i didn't use them that much.

if the -STR +INT charm that you meant is Cursed Gloves, it's in accessory slot. i tried to craft it before and i couldn't use it in the charm slot.

yeah, her max learnable healing skills usually exceeds my party member's HP (even the multi target ones). i usually use Sirani for her Drown Damage ability though (i didn't use her memento since i foolishly use Wealth Band on her, but i think that's quite foolish on me).

thanks for the locations! i tried to re-explore before submitting the review, but it seems that i missed some of the passages that i can explore to. i thought that they are dungeons and i don't really feel like re-exploring them again, haha.
Dyluck

Close
04/08/2018 08:16 AM
Thanks again for your kind words, aquatorrent! It means a lot to me, especially coming from someone like yourself who has played and reviewed so many games.

Yeah, mages used to have to choose between 2 weapons for either AOE or single target spells, so I made the latter stronger to give more incentive, but I might have to re-balance it a bit now that they can use both. And yeah, I put the gloves in the accessory slot to sort of even out the available items for each slot.
Pages: 1