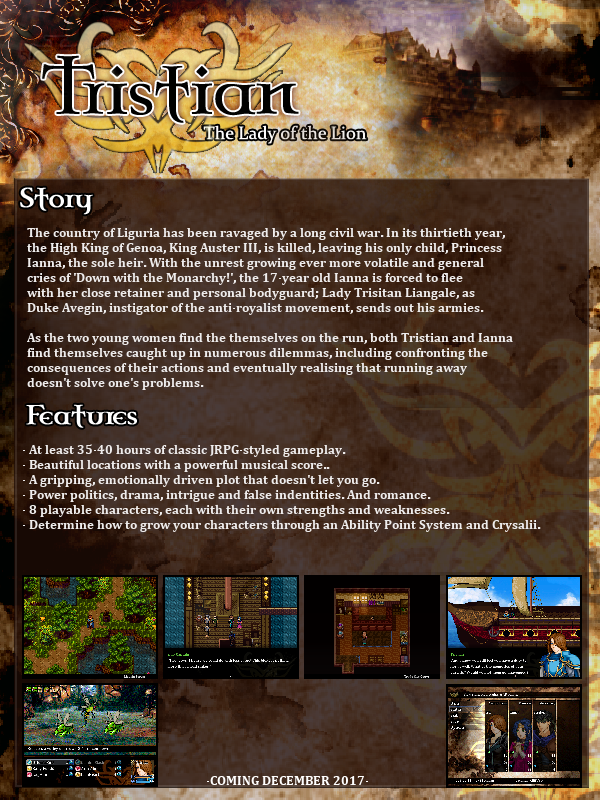 Close
01/18/2015 09:25 AM
My friend recommend me to this game. He said it's complete, though I didnt see any complete flag in this game. So just to make sure, my question "is this game already complete?".

Sorry for the silly question.

Close
01/18/2015 10:04 AM
No, it will be a long time before Tristian is completed. My other game Enelysion, is complete however.
polarcactus

lots of empty land,worse you need a crystal shard to get off the starting area o.o
tho for the adventure realistic look its ok also glad theres not random battles to a place to train would be nice

in Reglay after the scene when you 1st arrive you decide to look around town.
how ever a flaw at this point is spawning you north of town rather then the west which is where you should of just come from

finally a inn that treats you right! royalty should be respected! :D
(in fiction anyway)


can enter Bastillion Fort b4 going to Reglay or the camp,i did not try to go inside the building so im not sure if this can be a major bypass

im not found off royalty and so called hour because its just offensive to put someone above someone else because of the bloodline,family name or position in society.
regardless i really liked some of the scenes with tristian who at 1st seems like a empty knight who just protects the princess because her family has b4 her...which is just bad...
but she has a bit more to her character then that.
as she has her own views and understanding of things.
she cares about the people tho not all of them appreciate what she has done.
i like her overall
/
and how the princess does not just see her as a tool to protect herself but as a dear fiend if not more.
this really made the game playable for me if the 1st thing i saw was her being a significant character who was stuck up. id have probably dropped it right there.
it is a shame however that she would believe having no living family means one has no reason to live tho...thats a really, really shallow life
i like her overall
/
dante- i pity this guy his characterization is being loyal to his country and being in love with the single most impossible girl to be with int he entire universe
do not like him
/
coward-i feel this guy. he does not want to fight he just wants to live his life. just because his countries leads suck at life should not mean his life should be ruined right?
the one thing i would never forgive him for is for any reason he turns his back on his friends. at this point i dont trust him. cowards in war are scum who would do anything to save themselves. he should die in the story to redeem himself
do not like him

mostly story and exploring with a few 1 time battles
which feels odd having the detailed stat system that is irrelevant w/o lvling up and you cant train anywhere o.o
the battles are turn based and you have up to 4 members(im glad 1-4 are my preferred more is too much)


Overall
i enjoyed this title. the demo leaves a lot to desire tho would personally w8 until games finished or further updates at least
polarcactus

Close
03/25/2015 08:32 AM
@shayoko: It is a little early in the demo to judge Dante, but the guy does have a link to one of the game's antagonists and is probably the reason Tristian herself is still breathing. While he probably does come across as one-dimensional and pining for his lost love ( what guy wouldn't, if he were to lose a looker like Tristy? ), I am trying to flesh him out to the extent of TriAnna.

Also, I need to take down the current demos. They're quite outdated now and don't paint an accurate picture for the game's future release.
Mirage88 Close
03/27/2015 07:59 AM
Poor guy will probably be overshadowed even more once Darcy ( the resident Genki girl and Tristian's foil ) and Trabant ( the resident second-in-command bamf and all around bad-ass ) become major playable characters as well. But I do like Dante myself, even if the whole eventual TriAnna ship kills any chance of him being with her. Mind you, I'd advise players not to get too attached to the pairing. The game has three endings, after all ( Bad, Normal and Perfect Endings ).

But who knows, maybe Tristy still has unresolved feelings for him, complicating things even further.
emmych

Why must you read my mind? orz
unity

Close
03/30/2015 01:58 PM
I can guarantee that snogging in the game happens regardless of the endings. The player will 'only' lose out on an extra image still for the perfect ending. XD And a boatload of feels.
Rose_Guardian

The status for Tristian: Lady Of The Lion was changed to Hiatus.

Close
05/05/2015 06:40 AM
Well given the map loss and other things going on with Luchi I can understand taking a break for a little while.

Hey we got Enelysion in the end, we'll get Tristy too.
polarcactus

Close
05/05/2015 11:26 AM
Better put on Haitus than flat out Cancelled. I'm in a bit of a funny place right now ( and RL only worsens my drive to work on my games ) and I'm at that point where I have no desire to do anything game-related. Like I'll open up the editor, do nothing for half an hour, become dispirited and close it down. But it could have been worse. I could have lost my entire project, but it's backed up on Dropbox.

In the meantime, I'll refine my art and maybe even play Final Fantasy Tactics ( I've been eyeing that for a while now and may take some inspiration from it... without the whole Lucavi thing... And end up shipping Agrias/Ovelia. )
unity

Close
05/05/2015 11:45 AM
Yeah, I can totally understand. Between this and finishing Enelysion, burnout was inevitably going to happen. Take a breather, play some games instead, and just do other stuff, and you'll come back to this stronger than ever.
Pages: first prev 4567891011121314 next last