Throttle is a first time effort from the developer and as expected it does run afoul of some of the standard first time issues, such as defaulting to the standard nomenclature for skills, spells, weapons and the like but it also has incorporated some interesting and unique elements as well. The first is as the game opens with an option to play at one of five difficultly levels which then leads into a series of crudely draw but at least unique graphical elements to portray the story thus far, well actually to give you an idea of the story that you are about to play. 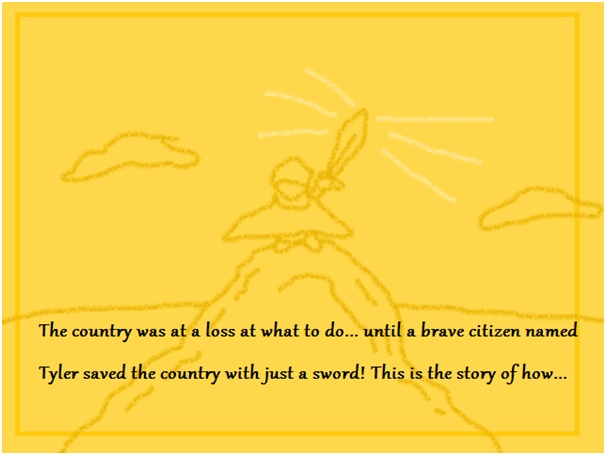 I have no idea why Tyler is wearing an apron, but he saved the day so I'm not complaining.

Unfortunately from that point on the game goes downhill with the second of the graphical elements that the developer is experimenting with much less successful, but then since that is the incorporation of isometric maps I can't really lay the blame solely at the developers feet for that one, RPG Maker really isn't designed to render 2.5 D accurately. It's mean to be displayed top down and any attempt to use the standard tileset to change that generally comes across as clunky and mismatched, as it does in this game. Perception of depth can be achieved by other means but that generally requires a little more familiarity with the engine and parallax mapping techniques. So there are many instances of passage errors and missed transition spots to deal with as you make your way through the game world. The biggest issue with this choice however is the fact that large areas of the game become impossible to clearly navigate since the perspective blocks access to doorways, transition points and NPC's.

There is also a problem with the balance in the game, I chose to play in 'normal' mode to give an equal experience, but the first two combats you engage in take you from level 1 to level 8, now one of those combats is against a 'boss' but even fighting on your own as you do at this stage of the game you can wipe the floor with this mini-boss in less than 3 rounds. However a few combats down the line and suddenly you are running across enemies that spam confuse and/or paralyse which means if you get hit, and you do, you may as well crash out of the game as there is no way to recover, either by spell or potion.

This imbalance also brings attention to a strange occurrence, which is a quite bizarre stat growth, or actually not, at some points the stats drop when you go up in levels, but not in any way that makes any sense. It's almost like the stat graph is replicating the tides, going up and down in waves. Some stats go up, other go down in what appears to be random ways. The one that is most annoying, and that's saying something since this entire mechanic is annoying, is the agility and dexterity for Jake the thief, those two are important skills for a thief so having these particular stats going up and down like a hyperactive yoyo is irritating in the extreme. 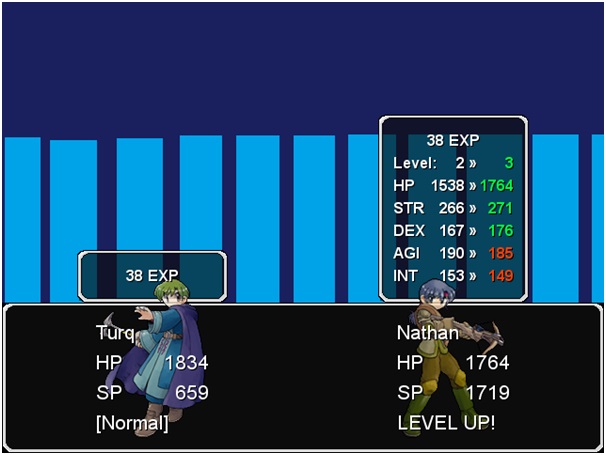 Going up in level obviously makes you stupid and slow.

Another thing that definitely fits into the annoying category are the battles backs used in the game, they are blocks of random colours that move in headache inducing patterns and are very distracting, but since the combats are the default turn based system I suppose they were one way of offering a bit of variety. Unfortunately this is not the way to do it. There is also a bestiary which allows you to see the skills of the enemy, which is always something I appreciate but in this case the bestiary only records information on the enemy if you use the scan ability in battle. Otherwise you get no information provided. In addition the drops from the enemy seem to be at either a 1 or 2% chance and the monetary rewards for defeating enemies is ridiculously low in comparison to the cost of purchasing weapon and armour upgrades, and indeed he most basic of healing potions.

However the biggest problem in the game and it is definitely a rookie issue is lack of story. The developer obviously knows what is going on but has made little or no effort to impart that information to the player. You know from the storyboard opening that a demon of some kind has newly arrived in the land and that your character Tyler, or Turq as I renamed him, is destined to defeat him, but as the game starts Turq is just an average Joe taking a walk, when not only do strangers give him weapons free of charge, but other expect him to defeat fierce monster blocking the path and others start following him around to aid him in his, as yet, aimless endeavours. There is no reason given for any of it. Progression is achieved simply by finding the next part of the map that isn't blocked by some arbitrary obstruction such as a misplaced boulder or obstinate guard, not because there is a narrative reason to go there. 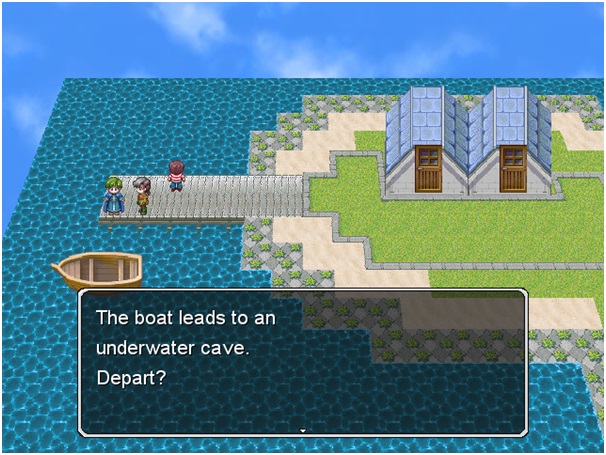 Why would I want to do that, do I look like I'm wearing scuba gear?

So after visiting most of the world, including mines, volcanoes, ruins and underwater caves you fill your crew compliment with an archer, thief and healer and then you run across a game breaking bug, the developer didn't give you a way out of the smoking volcano that for reasons that once again make no sense appears to contain a switch that allows access to a place called the snowy isle. Whether or not that place would be snow-covered is left to the imagination as you are stuck in the depths of a lava filled hellhole and can only dream of a place that has a hint of cold.

Given what came before however I think I can assume that the remainder of the game will have the same issues as what preceded it. Bad balance, little thought, too much effort placed on the isometric maps without actually planning them out to make them navigable and no story at all. There is a certain level of leeway given for a first game, but this one has a great many problems that could have been avoided if the developer decided to work on the basic skills needed to produce a balanced game rather than branching into something like the isometric maps for his first effort.