Remarkable, but not recommendable

Castles at War by freezing_rain is a real time strategy game made with RPG Maker VX. In this game, the player has to build and expand his base, gather money and recruit an army to ultimately destroy his opponent's stronghold.
There are different types of building available that can only be built on specific spots, which grant you money, the ability to recruit units, or other advantages. For example, having built the hunter's hut will not only prevent wild animals from killing your village citizens, you can also sell the prey to acquire some extra cash.
There are two types of units, namely defense-units and attack-units, of which the latter are more expensive to recruit. As soon as you have collected enough money from taxation, mining etc. and you can afford enough attack-units to outnumber your opponent's defense, you can send them into battle and win the mission. Since your enemy is not asleep either and will send own troops to attack your castle, a strong defense is also necessary.
It is possible to either play the story-campaign, which gradually introduces the player to the gameplay, the mission-campaign, which consists of specific levels, or a skirmish, which is essentially a free game where the player can adjust some settings himself. A short tutorial is also available.
Castles at War mainly uses RTP graphics and music. Although some of the maps are a bit bland, considering they are designed in world map style, this is not really something to complain about.

The Good (Positive qualities that jusitfy an increase of score):
- Castles at War's fundamental idea has a lot of potential. Not only the fact that it takes a step into a very differnet direction than what is usually created with RPG Maker makes it stand out. Also the principle that many buildings serve more than just one purpose is interesting and remarkable.
- The game comes with some pretty spiffy extra's. For instance, full mouse support is available (and recommended), which always gives a game an enhanced feeling. Also, many of the short status reports that pop up during the game are actually voice-acted (never mind the German accent). There are also multiple achievements to be unlocked, which is a nice feature, although they are normally awarded for quite simple accomplishments.

The Bad (Minor issues and nuisances that usually only decrease the score if they come in large numbers):
- Castles at War has been translated from German into English, which alone deserves respect. Unfortunately, a great amount of translation errors has been made, which can become slightly annoying after some time.
- Castles at War isn't exactly bug-ridden, but there are a few graphical bugs (e.g. defeated enemy troops teleport back to the edge of the map before disappearing) or smaller issues with the mouse control.
- Although the tutorial is quite helpful, there are some instances where the game is not very user-friendly. A minor problem is that the actual mouse controls are never explained, but most players would figure them out quickly (right-click equals cancel, by the way). A larger problem is that as soon as the player has selected which type of game to play, the following choice windows don't offer a cancel option any more. This means that you will have to either play through a game you didn't actually want to play, or restart the game, which can be a real pain if you haven't had the chance to save after your latest victory. 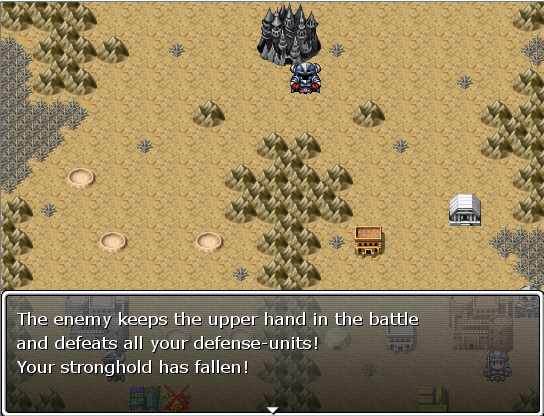 Either meet a tragic and untimely death... 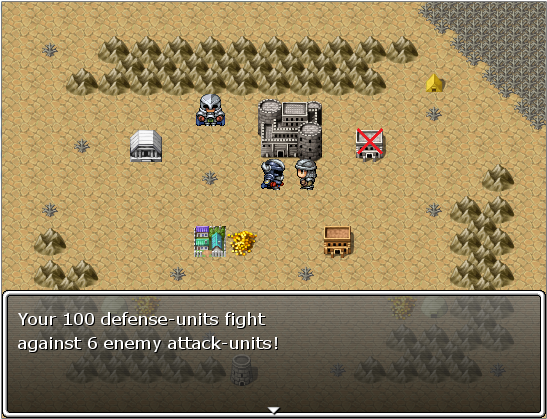 
The Ugly (Major problems or very frustrating aspects that lead to a decrease of score):
- As promising as Castle at War is in principle, it's the actual realization that is problematic. The overly simplistic approach makes the game's fun factor suffer greatly. As soon as the player has gotten the hang of it, there is little incentive left to play on. In spite of some added special conditions in later missions, the gameplay in general is extremely repetitive and, I hate to say it, outright boring. Little to no strategy is needed and the approach that leads to success is always the same. In addition, you will spend most of your playing time either collecting money or waiting. And since a good deal of the game is presented through numbers instead of grapical events, there is not much to look at while waiting either.
- Similarly, much of the game's potential goes by unused because of the lack of variety. There are very few different types of buildings, of which only two can be upgraded (extra citizens for the village and one enhancement for the defense-tower). With only two types of units available and a battle calculation system that simply gives the win to the side with more units, there is no strategic side to combat either.
- Another major problem is that the gameplay is not well-balanced at all. Special events (like a being robbed by thieves) trigger at random intervals and can throw you back to nothing early in the game. It gets even worse if your enemy decides to attack you early: No matter what you do or how efficiently you proceed, it is simply not possible survive an attack at that point and you will inevitably lose. But if you are lucky enough to live through the early stage, you will soon have enough resources to become absolutely unstoppable, without a real chance for your enemy to still defeat you. This inversed difficulty curve makes the game frustrating at the beginning and unexciting later.

Conclusion:
I feel extremely uncomfortable about giving Castles at War such a low score, because it has the potential to become a really good game. Unfortunately, in its currents state, most of this potential is lost. It might appeal to people who enjoy its simple, boiled-down approach, but in general, the game's fun factor is very low. Should the creator ever decide to improve and/or expand Castles at War however, I'd be glad to change my rating.