What a difference a day makes.

12th January 1649. According to history, with the exception of the birth of Jacques Carrey a French painter and draughtsman nothing of import happened on that day. Oh sure Charles I was languishing in Windsor Castle awaiting the 'trial' that would see the first and only English monarch beheaded, Louis, le Grand Condé was laying siege to Paris in the Fronde Parlementaire and Second War of Castro was about to erupt in Italy. So it was basically just another day in the 17th Century, births, deaths, rebellions and wars.

To the outcast protagonist of this game however, it's turns out to be a life-changing if ultimately fruitless day. Living alone on the edge of the great forest Albus has resigned himself to his fate. Out of food and firewood with the cold winter winds howling around his cabin door, he seeks his bed to try to preserve his dwindling strength. During the night as he sleeps a mysterious figure glides effortlessly through his locked doors and into his room and leaves a note on the bed where he lies telling him to come to the peak of the mountain. With little else to do and no other options but starvation or murder at the hands of superstitious villagers fearful of his albino colouring he embarks on the voyage.

It's pretty obvious early on that the developer is not a native English speaker, whilst there are few spelling errors there are a great many syntax ones which unfortunately has the side effect of making the dialogue both stilted and unintentionally amusing. Given the dark nature of the situation in which Albus finds himself that amusement ends up being a little off-putting and a detriment to the game experience. 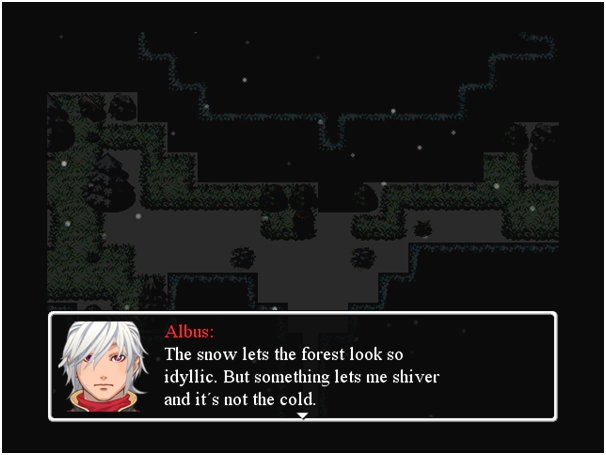 How can you tell what the forest looks like?

Once beyond the confines of his home Albus sets about trekking through the forest towards the peak of the mountain, not the easiest of things to do for both the character and the player. The screen is predictably quite dark and whilst that is accurate for a forest at night it does make seeing where to go a little difficult, though I imagine Albus prefers it as most albinos have photophobia. Luckily one of the few items you still had a reasonable supply of was candles so after accessing the severely minimalist custom menu you can create a small circle of light to guide your way. Along the track Albus runs across a lost child from the village and he is given an option to help them or not in various ways. There is no indication that these choices have ramifications other than not helping produces a negative aural response, so the choice is left entirely to the player's discretion.

Once you reach the peak of the mountain you are met with an impenetrable barrier, three objects bar your way to the monument at the top. The first a stone gargoyle who is no longer feared, second a golden warrior who no-one prays for and third a frozen maiden who lost her love to the ravages of war. The riddle is an interesting one, but there is no clue as to how to solve it since interacting with the gargoyle simply brings up a blank text box without any input commands. Fortunately for the player there is a glitch in the text event which means you can access it from behind. 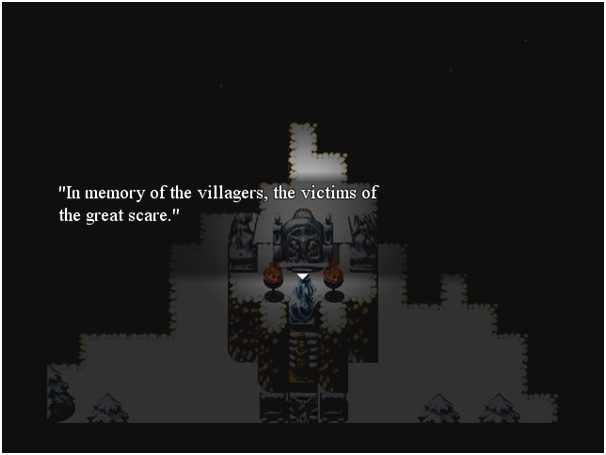 Reading that text moves the game along, I'm fairly sure it's not the way it was supposed to be, and finding a way to free the gargoyle, warrior and maiden is actually what I'm supposed to do, but as there are no clues provided as to how to go about that particular task, I'm fine with taking the shortcut. So now you need to head to the mansion of the mayor which oddly appears to not be in the village but on an island just off the coast. You do still unfortunately have to travel via the village full of people who generally want to kill you for daring to be born different. Only this time they actually have a legitimate albeit supernatural motive for wanting you dead.

It seems for reasons that were never satisfactorily explained half of the village have been transformed into flesh-eating monsters and turned on the other half. So you have a sequence of dodging around the ravening, though regimented in their movement pattern, cannibals in order to make it to the fishing shack, and the hopefully pescetarian fisherman who will get you out of Dodge before you become entrée. 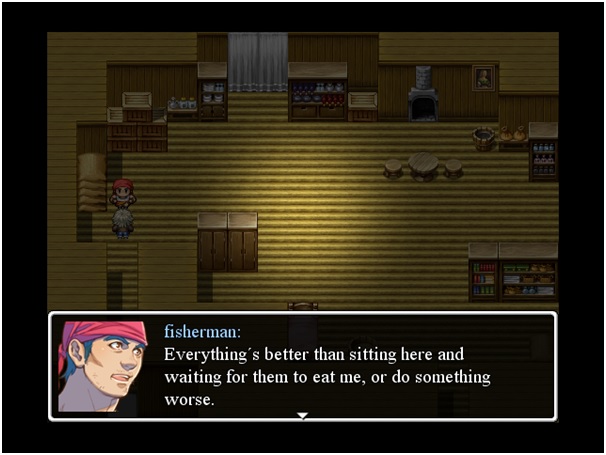 What exactly do you think is worse than being eaten alive?

So after a quick off-screen journey the fisherman drops you at the mayor's residence, and one hopes then sets sail for anywhere but home. At the back of the mansion you find a mass grave full of children, well actually you find a mass grave full of 27 clones of the same blonde child, this place is looking remarkably like Midwich, and then after a simple act of kindness you inexplicably receive a key to the mansion so you can go in and confront the mayor. Because for no logical reason, in fact for no reason at all you've decided that he's a mass murderer and some kind of evil influence who has caused all the trouble. Even though the mass grave actually has a touching memorial stone in place and looks like it's been well tended.

So into the mansion we go to come face to face with simply terrible mapping. I have to say that the first area you visited, the great forest wasn't badly mapped. It was nothing special but it was utilitarian and whilst incredibly linear it didn’t have any real issues. The village however started the downhill slide with pathways going to blank walls rather than doors, walls that you could climb and general passage errors. The Mayor's mansion adds vast empty featureless rooms to that tally of bad mapping choices, as well as furniture you can walk through, and doors that turn into walls when opened. Now I know this game was made in two weeks for a Halloween event, but the developer has shown they can produce at the very least serviceable maps, so the errors and issues are very noticeable, and should have been caught in a test run-through.

I have to ask, why was dashing disabled? I can understand in the village when you are being chased by flesh eating villagers, but having to trek slowly through bland and empty maps is painful. 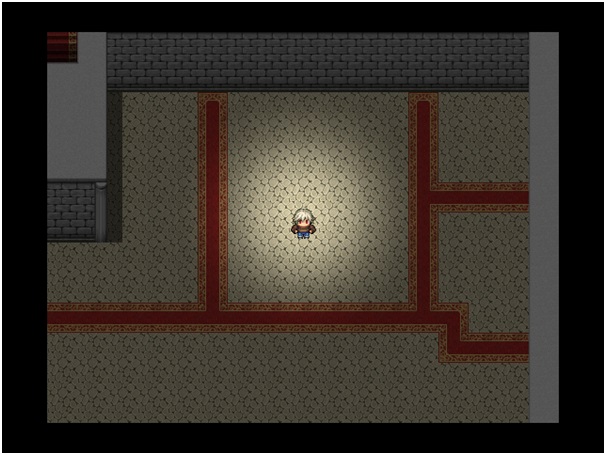 No, there are no secret passages at the end of those carpets.

One of the few things this game does have in its favour is the music, it's chosen very well. From the credits it appears that the developer of the game also created the music used for it, so I have to give him points for it. It's unsettling and atmospheric and is pretty much the highlight of the game. None of the themes used are going to get added to a favourite playlist, unless I'm gearing up for a night of horror films, but they suit the atmosphere that the developer is trying to generate.

Once you confront the mayor you are then presented with a completely implausible scenario that throws around some very dark themes with absolute disregard and all the empathy of reading a shopping list from the second circle of hell. This then leads to one of, if the comments on the game page are to be believed, three possible endings. Since I ended up back in my ramshackle home, I'm going to presume I got the neutral one, as I didn’t end up either punished or redeemed, just back in the limbo from which the game garners its name. I have no idea what actions during the game determine the final outcome. Perhaps those acts of kindness have an effect but since I aided everyone I could along the way and I still ended up where I started I'm not sure that's the case. Though given the ludicrous dénouement, I'm not sure any actions would have been considered enough for salvation.

In the end there isn't a lot that can be said about Limbus, the last 1400 words notwithstanding. The plot is convoluted and unclear, the language stilted, the maps for the most part uninteresting and error prone, with the saving grace of music that is well composed and placed. Even for a limited release contest game this falls short of the mark.