Warning: Here be spoilers for hints that involve the main story and late game sidequests.

Balance/Difficulty Questions
Why do some bosses start hitting for insane amounts of damage all of a sudden?
Show
This is the boss saying, "I'm getting desperate and am almost dead, so kill me fast!" When you start getting nailed hard late in a boss fight for damage capable of KOing a character in one hit, don't focus on mass heals unless the boss targets everyone. Just focus on doing as much damage as humanly possible, because the boss is going to go down in a mere few attacks at this point.


The fights are getting too hard! What happened?
Show
You're avoiding too many battles. I've witnessed this firsthand in LPs. If you're suddenly getting blasted for 70% or more of your max HP against random encounters, then you're avoiding battles too much. Stop riding Winter everywhere and use the Moogle Charm less. Overusing both of this will only make the game harder in the long run. Also take advantage of the belt relics that increase your maximum HP. Boss fights are more strategic and rely a little more on elemental resistances more than the first game, so make sure you have the proper items in your inventory to resist various elements.


General Questions
How far into the game am I?
Warning: Here be spoilers.
Show
The following is an order of all mandatory story locations. Optional locations are not listed.


What rare Tetra Master cards can be obtained from beating hummingways?
Show
I'll expand on this list as I collect this information again.


What are these Atma Fragments that I keep finding?
Show
They're used to power up the Atma Weapon sword that you find in the Aether Cave. Take the sword and any fragments you have to Baku in Mohadmal Junction and he can assist you further.


Lindblum Kingdom Questions
A boy bumped into me in the Augurer Quarter. Does he actually rob me?
Show
No, you do not actually lose any gold from this encounter, it's just a scripted story sequence.


What do I do in Lycosidae Grotto?
Show
Interact with the lanterns to illuminate the tunnels. This will cause the spider webs to disappear.


What's the point of the Augurer Colosseum?
Show
You can come here to pick up summon abilities that you've missed in your travels. Whenever you return to Lindblum, don't hesitate to check for new whistles! The whistles available for purchase changes based on how far into the game you are.


Ivalice Empire Questions
I read that the arena is in Mysidia, but I can't seem to find it?
Show
Go back to the world map. It's the giant structure that's right behind the town.


Is the outcome of Reiner's scenario preventable?
Show
NOPE!


Does it matter if I disable the magic wells in Mount Valla when pursuing Tritoch?
Show
Disabling wells has two effects. First, each disabled well makes Tritoch slightly easier. Second, the total number of wells that you have deactivated determines what type of reward you will get after talking to an NPC following the Tritoch fight. Disable fewer wells for Tritoch to be harder, but your ultimate reward will be greater. Note that not disabling any wells is a suicide mission! Though Tritoch is technically beatable without touching the wells, I really wouldn't advise doing that unless you've been power-leveling constantly throughout the game.


Five Wardens Part of Game Questions
Help! I got the airship and I never know where to go next!
Show
Talk to the soldier (later replaced by Montblanc) by the staircase inside of your airship. He will tell you exactly what your next move is.


Where did Loxley and Twill go?
Show
Go to the elder in Castora to initiate a small side quest that leads to you being reunited with these two.


How do I defeat Hugin and Munin in Horseman's Rest?
Show
You do exactly as you're told, show them the power of Bahamut.


What is the solution to the gravestone puzzle in Skyreach Castle?
Show
Interact with the graves in this order: 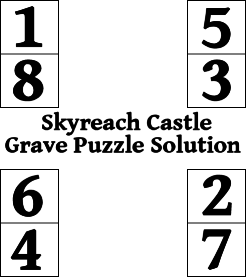 End-Game Sidequest Questions
What do I do with the oracle named Jandrah in Rivera? What is she for?
Show
She resurrects Carina for you. Bring her the Hope Amulet (investigate behind Ezra's tomb), an angel wing, dark matter, and a holy candle. Angel Wing is given to you by an NPC in Alexandria's Mysidian Quarter. Dark Matter is dropped from a boss battle in the Berona Mudflats. Holy Candle drops from Rubywing (monster in a box in Crystalline Grotto). After bringing these to her, she will try to bring Carina's spirit back to world. Shinryu will also try to escape, and you must defeat him. After winning the battle, Carina reappears and rejoins the party as a dark mage.


What do I do with Caraway?
Show
Caraway is an eccentric man who will trade with you. Bring him the item he is looking for and he will give you something in exchange for it. Here is what Caraway wants and what he will reward you with in chronological order:


How do I recruit Jossley?
Show
Jossley is missable since events late in the game make her impossible to get, so venture to Lenadia Castle after she is detained and make sure you've got a pamphlet for Bacchus Garrison on hand. Talk to her and she'll express remorse and then asked to be left alone. Talk to her again and you'll be able to release her into Augurer custody.

Jossley will then appear in Bacchus Garrison where she won't have much to do until you acquire the airship. At that point, she'll ask to be taken aboard. By the time you have to venture to the Underworld, Jossley will start receiving items from her contacts in Lenadia. After she gives you items on two different occasions, talk to her again after progressing the plot a bit more and she will want to help you further by joining the party. Accept her offer and she joins.


How do I recruit Kappa?
Show
Find him in the Necropolis optional dungeon, accessible from the Underworld Highway.


What are the required steps to complete Kappa's side quest?
Show
1. Put Kappa in the lead and investigate a bookshelf in the southwestern corner of the Mysidian Archive to find a book called Theory of Rebirth.
2. Bring Beronian Wine and a Miracle Shard to Kappa. Purchase Beronian Wine from Swinder's Rest off of the Branch Canals in Berona City. Miracle shards can be obtained throughout the game, but can be obtained indefinitely by stealing them from the Eurypterid monster in the final dungeon.
3. After speaking with Owain in Mohadmal Junction, find the Mohadmal Tomb in the Mohadmal Desert. Walk directly north of the chocobo tracks in the center of the desert to find the hidden entrance.


Where do I find the missing guard from Palumpu Station?
Show
Galvus can be found in the Northdale Inn later in the game. Talk to him and he'll just blatantly give you the key for Swordsman's Rest.


Where is Gau?
Show
Diamond Isle Cave, which opens up late in the game. Bring him some lamb chops from Hillsdale and he'll tag along.


What happened to Commodore Viceley after The Tidechaser sank?
Show
Venture to Castora and find Viceley hanging out at the docks. He'll bring you up to speed on where he's been all this time.

When I play the 3rd part, I will add that to this folder.

If you fear viruses or similar problems I might convert them to pdf.
UPRC

author=Firefly84
Shall I link my (still unfinished) guides here again?
All Guides for Blackmoon Prophecy

When I play the 3rd part, I will add that to this folder.

If you fear viruses or similar problems I might convert them to pdf.

By all means! I've skimmed through it before and found it to be a great resource. I also have a link for it posted in the game page description.
Firefly84

Close
02/10/2020 07:38 PM
Is there any signifance to the track marks that can be found on the world map? Does it mean theres an enemy that will drop a Augerer summon in the area?

Or is there a way to tell in general what monsters can drop one?
Firefly84

author=Dr_Chaos
Is there any signifance to the track marks that can be found on the world map? Does it mean theres an enemy that will drop a Augerer summon in the area?

Or is there a way to tell in general what monsters can drop one?


Even when my guide is not up to date, I always wrote the monsters for the with their drops. Also what summons your can buy when.

author=Dr_Chaos
Is there any signifance to the track marks that can be found on the world map? Does it mean theres an enemy that will drop a Augerer summon in the area?

Or is there a way to tell in general what monsters can drop one?

The chocobo tracks on the world map are for the chocography mini-game. You'll be able to learn about it when you reach the town of Hillsdale.

As for which enemies drop summons?
Loir
0

Close
05/13/2020 04:47 PM
Southeastern Lindblum. There is a labeled map in the game's Documentation & Help folder that can give you the exact location.
Loir
0

Close
05/15/2020 01:49 PM
Thank you for the answer.
I looked at the map and tried to get there from Lindblum, but don't know how. There are mountains everywhere. I have got a letter for the Altair's elder, to use the Altair tunnel. But how to get to Altair?
Noel_Kreiss

author=Noel_Kreiss
You're supposed to travel further south of Kaipo Cave. There will be a town south of a mountain range there.

^ That. Make sure you're teleporting to the Mage Tower to travel there as well, obviously.
Loir
0

Close
12/20/2020 03:32 PM
How do you get Kappa? I just made it to the area and killed the boss does this kappa person not show up till later in the plot? Because i have looked everywhere.
As a side note you know them one enemies that takeover a persons body? is there a way to stop them? best way i found was giving running shoes to gramps and increasing his speed right now he has like 400 speed fastest mage in the west :)but sadly even then they 50% of the time take over someones body. So is there maybe a item i missed that stops them?
UPRC

As for the enemies that possess party members, stack speed and kill them immediately. They're actually very weak.
marcuschoco
0

Close
02/08/2021 02:44 AM
I just arrived necropolis and i'm getting ass kicked hard by enemies there and in Fen stronghold, my level is around 43. Any tip to someplace to grind ?
UPRC

As for your levels, 43 should be fine. Make sure that you have someone devoted to healing if you're having problems, and maybe boost speed as much as you can. Exploiting enemy weaknesses is also an easy eay to cheese a lot of random encounters.
Pages: first 12 next last