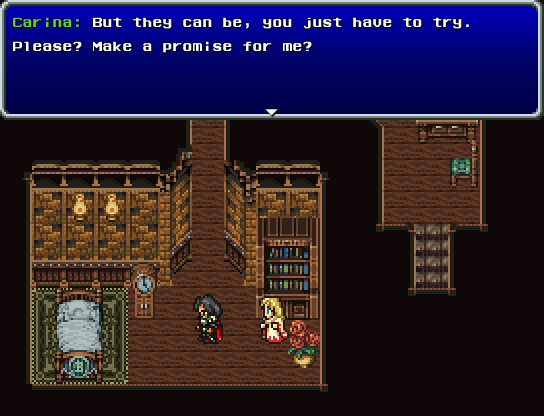 Carina makes her appearance. Also showing off the neat sprite that Noel_Kriss made for her a little while back!

Close
05/11/2014 09:04 AM
Oh! A something of mine shown in a non-mine game! Cool!
Can't wait to see another demo in whih she will hopefully be one of playable characters!
UPRC

Close
05/11/2014 11:18 AM
Hopefully! I may do a demo that ends when the player completely finishes the Lindblum continent. By that time, there would be five playable characters.

Then again, I've introduced Carina HOURS ahead of where I originally intended. I'm trying to work out how to bring in all characters early (like FF8) so that players can tinker with party formations early on rather than getting a character ten hours in and going "meh" because they already have a favourite party.

As for Carina as a party member, she seems fantasic so far.. She's very squishy (as she should be), but she's a tremendously good healer and her starting limit is insanely handy (Dia, hits all enemies with a holy elemental attack). She can still deal "some" damage with physical attackins as well, so she is genuinely useful outside of just healing the party. She makes Elina from the first game look like an amateur, since she was mostly just good for casting cure when she joined.
Noel_Kreiss

My favourite party from Final Fantasy VIII is Squall, Rinoa, and Zell. They seemed to be most compatible with me. Whoops, wrong game. ;P I generally favour characters to have appealing-to-me personalities to be in the party, although when the going goes tough I change the team.
UPRC

Interested to see how people "bond" with the characters in this game after how diverse people set up their parties in the first game. I don't think I saw any one character get ignored in the first game, and hopefully I'll repeat that here!