Which dream? Yeeees, you are probably asking what I am talking about...
but no, like some sort of final boss, the answer will be at the end of this review, a review I wrote after a lot of time I spent playing this game, because this is a LONG adventure!

Final Fantasy Blackmoon Prophecy 2 (plus!), or FFBP2, is clearly a fangame based on the Final Fantasy series, and it's also a sequel of the first Final Fantasy Blackmoon Prophecy, a game I still have to play because this is the one that attracted me immediately due to the charming graphics that are a clear homage to FFVI (one of the best Final Fantasy ever made, of course!). Likewise the sountrack makes uses of many FF popular themes, for example the Wall Market FFVII theme or the classical battle fanfare, and being this a fangame... it's quite appropriate and fitting! 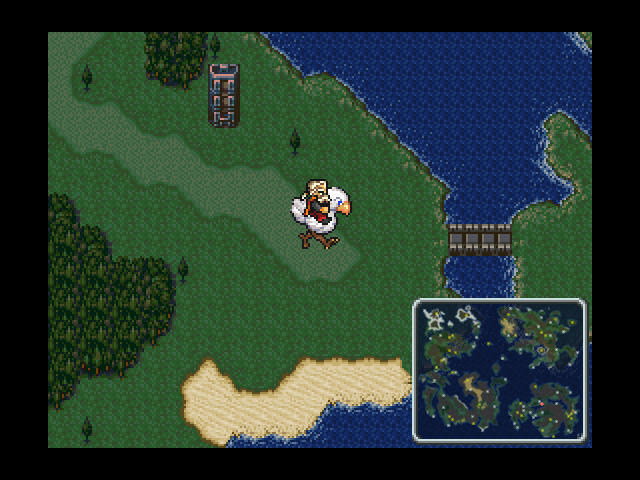 Zephyr Highwind is our main hero, he looks like a sort of Locke Cole clone (from FFVI of course), but he's a different characer, with a friendly white chocobo named Winter and memories of his deceased sister Ezra. He is a young warrior and Augurer, an anti-Esper monster summoner that is called by a more experienced Augurer, Reiner, and joins him to perform a long quest that will let him travel all over the world, find many allied and friends and fight even more enemies.
This is the classical Final Fantasy adventure, isn't it?

The world, as expected, takes inspiration from FFVI with a blend of magic and steampunk technology that enriches what at first appears as a typical jrpg fantasy world. But wait, there is more! The game is set a lot of years after the first chapter, so expect to find some familiar faces and references to the old adventure (that I did NOT play, lol!), not to mention some returning party members. Neat!
Mapping is pretty nice: I liked the various town and dungeons since they were not too simple and small and not too complex and large, there were no map errors and they looked quite different. Some dungeons also have distinct features, like the one with the spider webs and the lamps that have to be lighted, or the underwater tunnels with the corals that have to be pushed to create a path (a place that also has some avoidable opponents besides the random encounters). Small things and details that diversificate the dungeons making them different and varied. 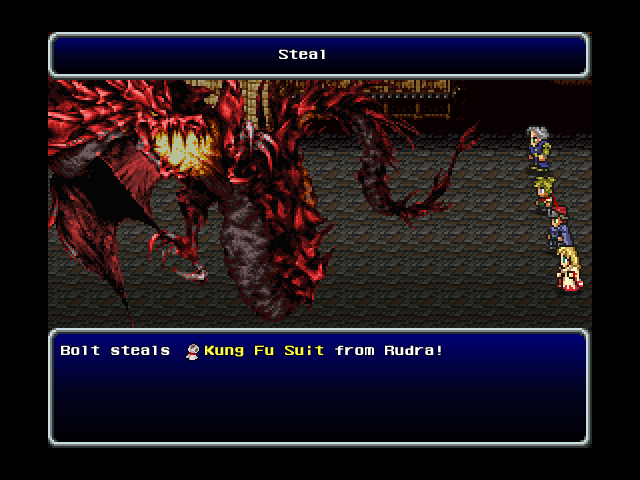 Always steal from bosses before fighting them!

Dungeons. Yes, this is Final Fantasy so expect lots of them, no matter if you are looking for a crystal or you are just going to the next town, the important thing is that you have to be prepared to face random encounters and remember to save as soon as you find a save point OR on the main map. Does this sound like a typical Final Fantasy gameplay? Oh yeah, because it is, but do not expect the typical Final Fantasy difficulty: FFBP2 is an easier game that do not requires an expert player, the important thing is taking your time to level up and do not rush (and this is rather easy to be done since you can easily escape from most combat encounters and use Winter, the white chocobo, to avoit enemies on the main map!) or you will be soon underlevelled!

Let's speak about combat! This is the usually side view battle with four heroes represented by little and nicely animated battlers, against large colorful enemies. Expect to fight many classical Final Fantasy opponents like the hated Bombs, Ifrit, Shiva, Leviathan and also Gilgamesh, the weapons collector that will give one of his prized arms every time is defeated! 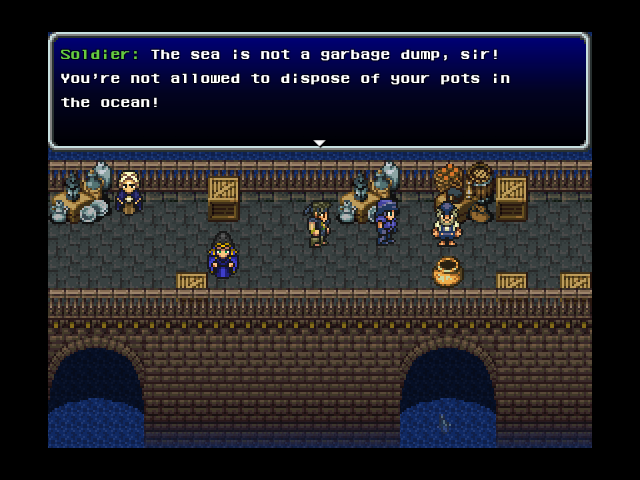 This game has many themes. One is "keep the environment clean"! See what happens if you do not!

Upgrading weapons and armors is clearly important! But hey, weapons are just one of the many attacks that our characters possess, there are also spells and summons: the first re the usual elemental attacks or effects that can be permanently learned by the characters by reading books OR can be temporarily usable by equipping the good old materia stones in one of the slots (in this case you also earn some nice bonus to some attributes too). But there are many different materia types, some gives special skills or improve the character's abilities or even let him use new summons. Summoned creatures have different effects, from healing, to powerful attacks, and like the spells cost MP (Mana Points... or Magic Points, whatever!).
But this is not all! Each character has in fact various skills derivated from his/her class (a thief can Steal from the enemies, a knight has some nice special attacks and so on...) and also a greater special skill (or Limit Break) that is usable only when the Limit bar is full (you will also find some potions to increase the limit, bit usually a character just need to be hit).

I talked about combat and exploration, but this is not all! This game also has some extra activities like fighting in a coliseum to earn new summons materia, or spend money to improve the Augurers' main base and recruit workers to earn more gold and open new shops. I said earning money because after each mission you can check the letter box to receive the rewards.
And then we have also a card game(tetra)! There are some gambling dens in which you can play and gamble against other players. 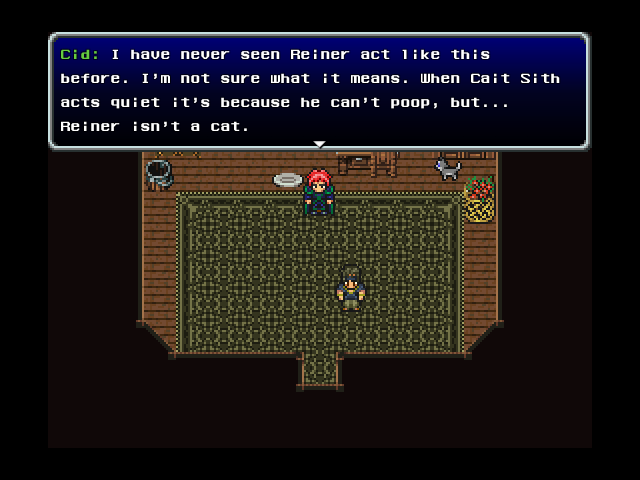 This would not be a good Final Fantasy fangame without a guy named Cid. And there's also a Ca(i)t Sith!

Final Verdict
This game is BIG, and there is a lot of everything: many playable characters, many opponents, a big main quest and several subquest and optional activities like monster hunting, playing cards and so on. These are just extra features of an incredible and epic adventure. Flaws? Do you want flaws? Well except for the rather low difficulty of the game, the main flaws are the same you can move to a game like FFVI: there is no large map, diary or note that will tell what you are supposed to do and where you are supposed to go, so you have to read each dialogue carefully and remember the positions of the various cities and points of interests on the main map for what concernente the secondary missions, because nobody will remember them for you! I also found a minor bug: when creatures are summoned the party members disappear but this does not happen with severely wounded party members (that have a different stance). Really a minor oddity, and the only one I found!

A dream came true: when I learned that Rm2k3 existed, I was hoping to find a great old style jrpg as good as FFVI, with moogles, chocobos, white, red and black mages, many dungeons and side quests, airships and crystals, and a large cast of different interesting characters...
Well, this was the game I was dreaming about.

Ok my three advices are:
1) Play this game!
2) Learn the opponent weaknesses and exploit them (use ice against fire monsters, for example!)
3) Interact with every barrel and crate because there are lots of hidden items!


After you progress to a certain point, you actually have an NPC who always reminds you of what your quest is (hint: airship).
TheRpgmakerAddict

author=UPRC
Hey, this was a fun review for me to read! I'm really glad that you've enjoyed the game!

After you progress to a certain point, you actually have an NPC who always reminds you of what your quest is (hint: airship).

Sorry I had to be more specific! You are right, I know what you are talking about, but yeah this happens a bit later in the game, and for that problem I was referring especially to the secondary quests: for example the monster hunting guild gives you the names of town and locations near the objective... BUT my memory was terrible and the mini map was not so useful to understand the area!
Clearly later the airship solved all these problems :)
Pages: 1