I'll start with a funny note: I began this game years ago, probably a short time after it was released, BUT... I wasn't able to defeat the first "boss" in the prologue. Ok, not a real boss, just a bunch of skeletons, anyway I recently decided to give a try, and after a (little) bit of grinding I was able to succeed.
Luckily, since this game is good!

The Good
Legend of Heroen is a classic fantasy adventure with a classic sword wielding hero with a typical mysterious origins. Nothing new or particularly original, but everything is very well done:

The characters - I liked them a lot, as the cast is made of many different characters besides our mysterious hero, like the pirate Goro and the captain Harbrok. I used these two as example as they are really different also in play, the first is a damage dealer, the second is rather weak but can improve the attack and defence of his allies. Then you will have a couple of mage, a healer... well, again nothing new, still this is well executed.
Speaking about the Abilites, these aren't earned with levels: levelling makes the character stronger, but new abilities are unlocked automatically during play, or when you spend elemental stones found on the various maps and gems and basic weapons that you can buy from the merchants you will find in any city. Nice idea, this is different from the usual system (more levels = more abilities).

The characters are also nicely animated and do not use the old, boring stock charsets, that are reserved for the boring citizens and merchants, but they are original and looks good. I approve this choice!

The mapping - Again, nothing particularly new or original, but adequate and well done, I liked the look of the different towns, and I liked a lot the world-map travel. It's exactly what I would expect from a Jrpg of the gold age! The choice of chipset is adequate and you won't find anything out of place (just a couple of clipping errors on few maps, not much anyway). Some visual effects are really incredibile (like for example the wind in the desert or the blur in the forest).

The gameplay - The game is varied: you have combats, puzzles, duels, most dungeons have some sort of gimmick, like the grapple in the swamps or the claws in the forest. You have dark caves that are difficult to explore due to the reduced vision, you have traps to avoid, and cableways to use. It's a game that also rewards exploration with hidden bonuses. 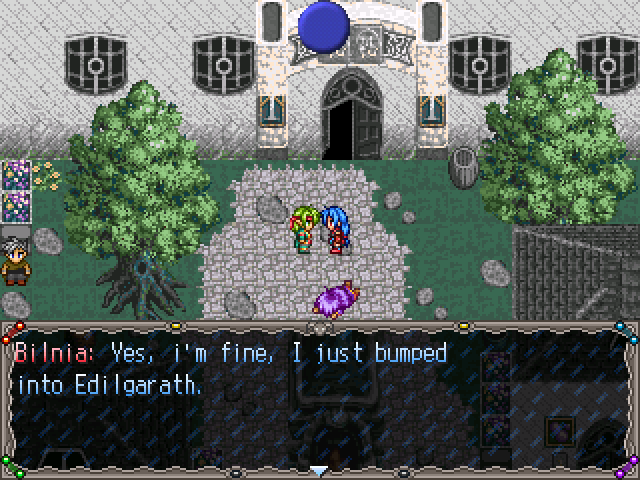 The Ok
Combat is old style: random encounters, except for the bosses, and front view of the enemies, no battlers, no facesets, nothing fancy or new. You have the usual base attack and special abilities that cost Mp, that lets you heal the party or hit with elemental attacks (some enemies are obviously weak to some elements). I noticed that you usually can escape from every combat, except for some areas in which escaping is impossibile at all (like the caves with wasps and efreetis), as you will always fail!

The music... well most are from Final Fantasy (I can't remember if most music I heard was from FFVII or FFVIII but I recognized these themes) or other games, nothing particularly new but it works!

The Bad
First thing: there are some untranslated dialogues, and some partially untranslated parts (for example the main text is correct, while the characters laugh with the spanish "Jajajaj" instead of the english "Ahahahah"). Then you have spelling errors like "stoping", "atacks", and "reinfored sword". Too many to list, anyway that's not a great problem in my opinion.

I think that the main flaws are some difficulty spikes (some particular bosses like the floating swords, the rock climbing part with the falling rocks, and the infamous black knight duel) of some very difficult combats and minigames. The presence of save points using sparingly does not help (but luckily you can always save on the world map!).
I had also to watch a video to understand how you should kill the ghost before the maountain path: you will find a ring that throws fireballs, the problem is that you have to stand EXACTLY at a right distance of the phantom with disappear without taking damage. The problem is that if you do not know that he flashes when hit, you can mistakenly believe to hit while you didn't!

Another choice I did not like was to make some "hidden spots" like the one in which you have to find the Teeku: the place is hidden on the map, unlike towns and houses, and you just have to enter that by chance. Not a good idea I think! 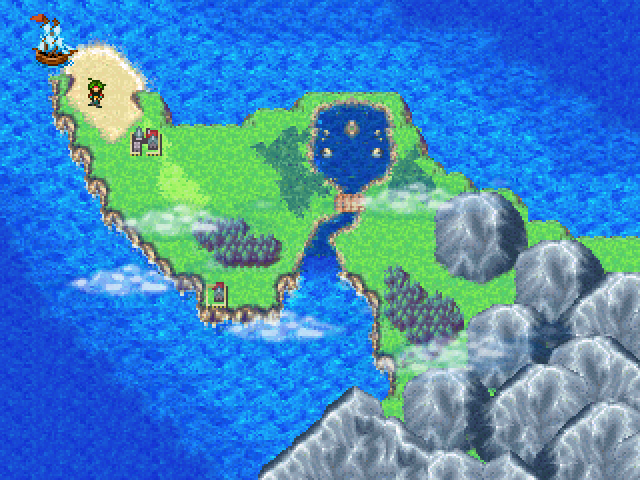 The Verdict
Legend of Heroen is a solid classic, and one of the best spanish Rpgmaker games I ever played. It's not overly original, but it's really polished and entertaining.
This game earns a solid **** - good game that deserves to be played!