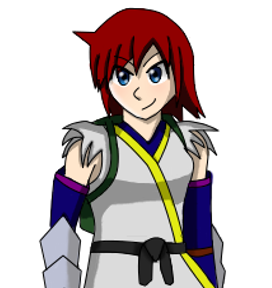 Name: Zero
Age: 18
Arya Landale all grown up. Zero is a wandering mercenary and veteran explorer. She often takes jobs to eliminate Miasma monsters due to the fact that she possesses a strange immunity to the Miasma's effects. While Zero is a kind girl at heart, nine long years spent alone and on the road has kept her from learning many social graces. This often gives her a rude and dismissive aura which leads to many misunderstandings. The events of her childhood has left a permanent psychological fear of holding any blade. So instead of learning to fight with traditional weapons, Zero has opted to learn martial arts. While she tried her best to distance herself from her childhood, some habits are impossible to break. Even after nine years, she will still go after anything sweet with a strong passion.

Nine long years spend braving the elements has given Zero a new level of endurance she lacked when she was a child. Zero can hit hard, take a lot of hits, and has built a reserve of stamina to endure a long brawl. Unfortunately, Zero is a simple girl, and doesn't care much for anything that doesn't deal damage. Therefore, Zero has no drives that inflict status effects and can't carry many items, as she is used to picking up whatever she needs off the trail. 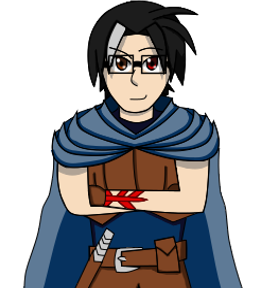 Name: Isaac West
Age: 17
Isaac is an enigma. Casual and cheerful at times, awkward and clumsy at others, this man is as predictable as dice. A thief by trade, Isaac is always on the prowl for a good target. Though he seems to trip and stumble a lot, he always seems to end up with more money than you saw him with... Anyways, Isaac is a man of stories. He will always be glad to tell you a story of his many adventures as a thief, although he does have a habit of telling you something you don't want to hear with every story. But one story he will not tell is the story of how he got that crimson eye and the bloody tattoo on his arm. A far cry from Zero's more serious personality, the two often lock horns and get into arguments about little things that don't matter.

Isaac is a fast fighter, meaning he will almost always act first during battle. He's rather weak physically, and can't do much damage, but he was never about damage in the first place. Isaac instead opts for a more roundabout approach, preferring to debilitate the enemy with status effects and stat reductions. However, Isaac possessed a unique ability; By cutting his wrist where his tattoo is, Isaac can activate Blood Magic. A powerful form of magic that takes health along with stamina to achieve great effects. Also, as a thief, Isaac is accustomed to carrying anything he can find, so he has more slots to store items than Zero. 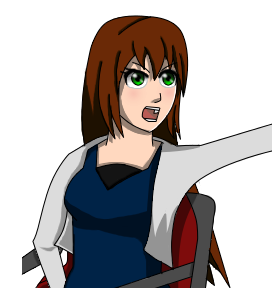 Name: Myra Whitewind
Age: 19
After her best friend fled her hometown just minutes after it was destroyed and her legs rendered useless, Myra had a lot of adjusting to do. She is no longer the rowdy young child she was, for the most part, and now is a more calm, collected individual. However, she harbors a huge frustration for not being able to walk, so she built a wheelchair for herself in order to get around. Having taken her life back into her own hands, she developed more of a no-nonsense attitude and always pushes people around her to do their best in anything they do. Myra had done her best to bury her past in order to move on, but burning questions and frustration still nag at her every day. When she finally meets Zero, the girl who was the cause of all her pain, what will she think?

Myra is unable to fight head-to-head, but she compensates by bringing a bow into battle. Also, as Myra doesn't have to worry about carrying as much weight, she can hold the most items of the three. She is also heavily oriented to magic. Her drawbacks are that she is incredibly slow, and cannot dodge any attacks. Plus she is very frail and can't take many hits in combat. 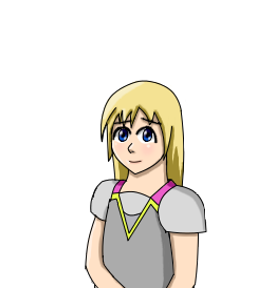 Name: Arya Landale
Age: 9.
Zero as a young child. Arya Landale is a shy girl who loves to read and sew. There is not much she hasn't read (for her age of course!), and is quite knowledgeable about the local flora and monsters. She is very level headed, unlike her brother, and is the only one capable of convincing him to stop before he does something stupid (Mostly of the time...). If she ever does get fired up about something, it's candy. She has a slightly unnatural addiction to anything sweet, and will even go so far as to hide her candy from Alex so she could have it all to herself.

All that time spent indoors means Arya gets exhausted quickly, and is very weak physically. She will have to guard often during battle to catch her breath. But, like a well-knowledge individual, she knows that preparation is key to success, and therefore has sewn extra pockets in her dress so she can hold more items. 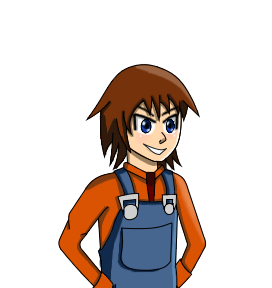 Name: Alexander Landale
Age: 11
Brash, mischievous, and quick to anger, Alex is not the type to sit still whenever there is an adventure to be had elsewhere. He fancies himself a hero in training, and is never seen without a long stick he found on the ground, er, actually his DIVINE SWORD OF THE GODS!!! While Alex may not be the most patient child (<-Understatement of the year right there...), he never turns a blind eye to someone in need. He always throws himself into the middle of a fight if he sees a child being bullied. Unfortunately, that causes a lot of misunderstanding with his mother, who believes Alex to be the bully.

All those brawls he keeps getting into has shaped Alex into a competent fighter. He can hit enemies pretty hard with that stick of his, and he has the endurance to swing it around for a while. But believing that his DIVINE SWORD OF THE GODS!!! is the only weapon a hero needs, he doesn't have a lot of pockets to store items in. 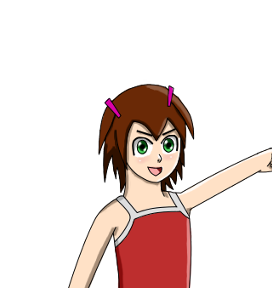 Name: Myra Whitewind
Age: 10
Arya's best friend. A tomboy a heart, Myra can usually be found running around the village or climbing trees. When angered, her speech starts to slur and she begins using made-up words. While she may have a tough exterior, she has a soft spot for teddy bears and "girly" things (A fact that she is almost willing to kill to keep secret!).