~Prenote~ (Feel free to skip this)
Okiku, Star Apprentice was a somewhat short experience. It was pretty solid on a lot of fronts, and was extremely structured. Being structured definitely helped for a “go forth into the world” kinda game without much of a hand pointing where initially. It eventually becomes clear but it’d be kind of hard to be lost for long. I’d recommend playing it when one has free time. Okiku is great~

Let’s review this then! Good thing I came prepared. Right?

~Gameplay~
By far, the best thing about battles was how you became stronger. I ended up grinding in the beginning for the fun of it, and I certainly did enjoy it. I might question the design of making any boss weak to a spell with a stun state attached to it as happened at least twice. I stun locked the last two bosses before the final boss to death and it was anticlimactic to say the least. If anything the battles were too easy. That’s definitely better than being too hard - at least in my eyes. They could also tend to easily get simplified to spamming a specific spell to win with the occasional heal thrown in. It was fun overall since most battles became about leveling a skill, learning an enemy’s weakness, or getting one of the important items.
The Wand of Blasting was fun too! I think I recall Marrend saying that implementing the wand was a butt. I think it was worth it! It was pretty obvious when you needed it for a puzzle and there was enough use in it for first strike purposes. I admittedly ran around shooting things for no reason…
3.5/5 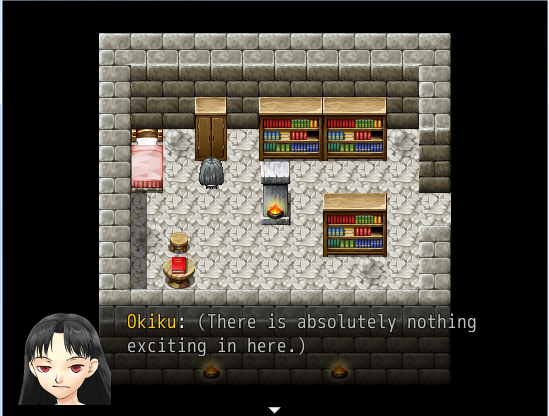 ~Graphics/Mapping~
The mapping could be a touch wonky at times, but the majority of them were nice to look at even if they only served their purpose of being a walkway. I might have a slight problem with the similarity of some maps however! A lot of the towns look similar – and I’m not completely sure why? I don’t think you need to make every town nearly exactly the same to keep it simple – you could just keep them all small for example. The different world maps looked pretty similar as well which I didn’t find entirely necessary. This is where I think Okiku toes the line between being comfortably set in a pattern and just copy-pasting the same maps with slight changes. It was good for letting me know what I could just skip over (there were always locked houses and stores with the same items) and what I needed to pay attention to (the inns), but the visuals got boring pretty fast. Okiku’s expressions were just the greatest thing however~<3 It’s maybe the best thing about the visuals, or maybe even the game!
The maps were nice, but I saw them a little too often! There were some minor mapping errors here and there that looked a bit funky but didn’t hurt you overall.
4/5

~Music/Sounds~
Not much to say about this! I liked the battle themes but whether the songs were original, rtp or what is beyond me!
3.5/5 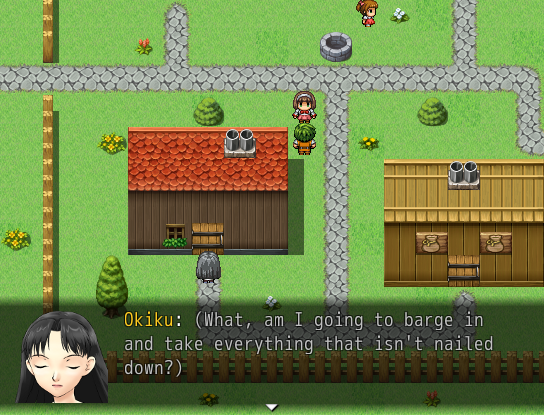 ~Writing\Story~
The story did it's job. It was really minimal and it seemed purposefully so. I REALLY loved Okiku though. She’s just a great character – the sarcastic ones get me every time. What can I say? Her relationship with her master was funny too especially her tendency to call them old. I can only imagine what Okiku had to do before for this silly person. And god, her face is the best thing.
I mentioned earlier the best part about the visuals was Okiku’s expressions and that was no lie! The story is essentially one big fetch quest, but it gets Okiku right out into the world and I appreciate it.

You got most of your points from Okiku. 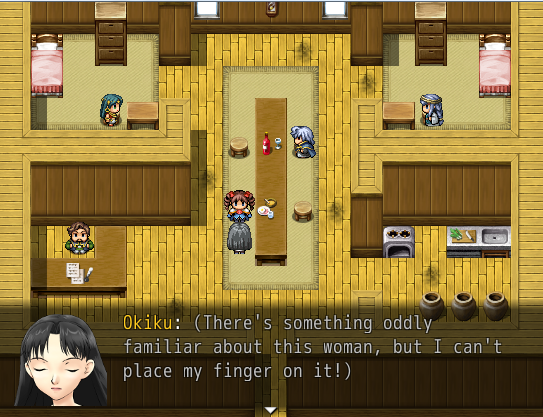 ~Prelude~
In closing, this game was pretty sweet. The gameplay was good – nothing too exciting but I enjoyed it – and the characters were fantastic. I think the shortness of the game helped most of these factors, save for Okiku’s character, who I’d love to see more of. I probably could go a longer game with this battle system and plot but I think this length did the game more justice!
3.5/5

Guardian of the Description Thread
19498