0 reviews
Gamepage for the current version of the game HERE.


This page is for the cancelled VXAce version of the game.

Explore the world and the space above it, beat enemies and collect their skills, manipulate your environment, upgrade your base, unlock more heroes, mine gems&ores, craft weapons, raise plants and animals and use the produced goods to cook, then feed your heroes to increase their strength, or simply get wasted and start a good old bar brawl.
Build cities, raise armies, and lead them into battle.

It's now been slightly over two and a half centuries, since humanity suffered its greatest downfall, the Searing, brought about by Terra's own Defence Sattelites, that got taken over by Providence after a series of coordinated attacks.

Civilization is slowly building up again, but is nowhere near its previous heights.
The technological progress, held back by Providence, seems stuck in a medieval state.

This story follows the adventures of an initially small band of slightly wayward people, as they set out to recover an artifact, possibly containing secret millitary codes with the capacity to retake the hijacked satellites. However, the artifact in question got stolen from a merchant, by a bunch of mercenaries turned highwayman, and they likely won't give it up peacefully.

Where will their travels lead them?
What dangers will they have to face?
What obstacles to overcome?
What foes to vanquish?

There is only one way to find out. 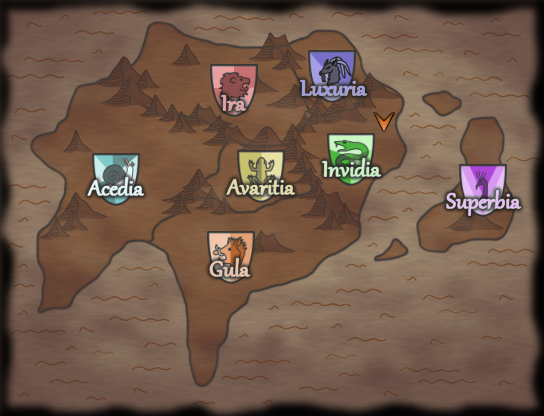 History:
Terra was once home to a space faring civilization,
though not advanced enough to traverse the distance to the next solar system.
They spread out to the various planets and build Foundations.
These large space stations where created as footholds
for exploration and, in some cases,
preparation for later Terra-forming and settlement.

All this changed instantly,
when an until then little known sect managed,
to simultaneously release poison gas
into the Foundations life support systems
and turn Terra's Planetary Defense Satellites against itself.
The following cataclysm would later be known as the Searing,
or, as proclaimed by Providence, the wrath of god.

Invidia:
The split realm.
Torn apart after the death of its former king, this country was split into factions, loyal to the various successors, and plunged into a 30 year war.

After the dust settled, only 3 factions remained.
One of them, lead by Joffrey Evyn, collapsed in on itself, after he failed to pay out the mercenaries, who's services he employed, to conquer much of north and central Invidia.

After their regicide, the leaders of the 3 biggest armies divided the conquered lands amongst themselves, though the newly formed borders remain contested until this day.

Superbia:
The lone island.
Home to proud and xenophobic clans of warriors. Rule over this isolated island is constantly shifting from warlord to warlord, the only constants being war and the presence of Providence.

Luxuria:
Land of love.
A rather small and unimportant kingdom, who's only claim to fame seems to be the unconquerable libido of its ruler and his never ending love affairs, which, more often then not, threaten this otherwise peaceful land.

Ira:
The artists of war.
If you want peace, prepare for war, and prepared they have.
Nowhere in all of Gaia will you find a more skilled bunch of warriors.
Every male child is trained in the art of war beginning at his sixth birthday.

The main export of this country are skilled mercenaries, which fought and won in every mentionable battle for the last century. With all this in mind, it might come as a surprise that Ira hasn't expanded at all, since its founding, and has never fought a war on its own territory. Just as they say, if you want peace, prepare for war.

Avaritia:
Land of merchants.
This country lies in the center of Gaia's main continent, bordering every other country except Superbia, making it the ideal place for trade among all nations.
It's said that its king would sell his own country – for the right price that is.

Gula:
The great desert.
A hungry country with little arable land, who's leader is known for his opulent banquets and not much else.

Acedia:
The sleeping giant.
A land which has seen better days, but still harbors the potential to rule the world.
Seat of the holy city, headquarter of Providence.

Albion:
The cursed island.
There is a legend of an island chain east of Superbia, however, no one who ever went there has returned alive.

The Mundburg serves as your base of operation, it starts out as a run down fortress at the edges of Invidia and is restored partially in the beginning of the game. It can be expanded during the game with rooms such as a library, sickroom, bar, or bath. Different events/cutscenes occour between your playable characters and can unlock new quests among other things.

While inside your base of operations, you control Broseph Iroth, gentleman butler and renaissance man.
Use loot and bought items as materials to craft more powerful weapon and Sphaerae
Farm plants and raise animals and use the resulting resources to cook food that can be used to increase your character stats and elemental affinities.

Create your own towns with buildings, fitting for the region the town is in and overall progress you made, gather resources and raise an army.
Unlock new buildings and resources by playing through the storyline.

Use your army to take on neighboring towns, regions, or entire kingdoms.

Battles take place in semi real time, but the ability to stop time at any moment to devise a strategy or input commands. Skills are the same for enemies and player characters, once you have encountered and defeated an enemy, all his skills are unlocked for your party and can be trained with skill points that can also be acquired through battles.
You can equip 3 weapon skills and 5 Sphaerae skills. (with 3-5 regular and up to 2 elite skills, selected from the 2 elements determined by your equiped Sphaerae)

Unlock Hidden Sphaerae abilities to manipulate objects in the world. Like move a wood log, light a torch on fire, freeze a puddle to a solid ice pillar, or melt a pillar down.

I do plan to release demos of the new version as soon as the first main systems are done, instead of waiting for the completion of the first chapter.
Libary

Still working on the battlesystem, but here is some eyecandy in the meantime.

A bath (style mix between japanese and roman) with adjacent heating room. Had to mix, edit and recolor a lot of different Tile(set)s for this since I couldn't find any one decent/usable set.

author=nhubi
So, any update on this one, or has it gone into the dreaded 'hiatus'?


Worse, it got into HiatusxHiatus due to personal issues.
Now I am in the middle of overworking the whole skill & battle system as well as the conquest system, which means most of my old progress will be lost, but I hope its worth it.
Pages: 1