I do plan to release demos of the new version as soon as the first main systems are done, instead of waiting for the completion of the first chapter.

It's not what you think, I am still actively working towards a tech demo, however not with RMVXAce, but currently with RMMV.

The main reason is that I failed to implement the warfare system yet again and can't imagine a good implementation without mouse use, among other things.

I am currently working on a mini project that implements a rudimentary version of what I hope will become the final version of the warfare system.
Should it be a success, the project will switch from VXAce to MV. (still with 32*32 tileset & parallax maps through a plugin, so I am not starting from 0)
Otherwise I'll have to pick up the pieces and think of a different way to display the waging of war.

The game is back from the (presumed) dead and gone into specification freeze, so I won't add new features to it, though some existing features still need improvement or partial overhaul.

The game page has been updated, I hope it's more streamlined and better overall.

My new years resolution is to go into feature freeze and hopefully get a techdemo out before the end of next year.

The latest changes are to the addition of a toolbar so you no longer have to open the menu every time you want to change to a different tool:

Currently reworking the Quest Menu (to read Quests from .txt Files) as well as changing parts of the Intro.
Also the Headquater will no longer be developed in one go, but in multiple steps.
I hope that this will lead to more longtime motivation/feeling of reward.

The following is a before/after view of the Command Center:

Warfare, the final version!? Are we there yet? I hope so.

So yeah, I hope this is the final version.
It's not as free as the last one, but it does the job it should:
Deliver a combination of a narrative structure and battle mechanics that aren't totally broken. 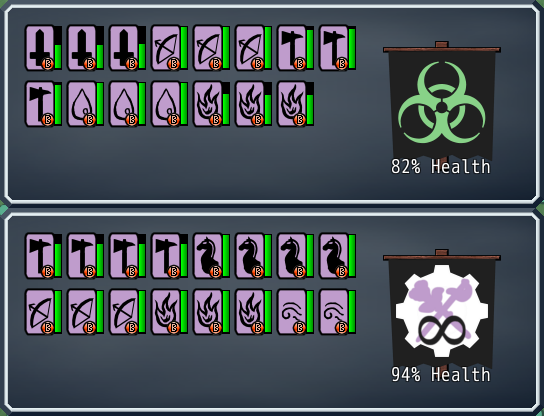 The games main title changed slightly and is now pure latin instead of the original mix.

Tried to implement an equipment system in may, ended up scapping it in june, later on also scrapped the existing level and skillsystem. Now there will be no levels
Skills can be earned and equiped independently. (Or at least thats how its planned, implementation isn't quite done yet)

Currently I am focused on reworking the conquest/warfare. (Yes, again, to quote the architect: 'this will be the sixth time we have destroyed it, and we have become exceedingly efficient at it.')
I hope to get it done by the end of the month. And yes, this was necessary, the old system was to prone to easy exploits of the enemies artificial stupidity.

In the meantime, I have cleaned up the gamepage and remade some character faces and names to make them less obviously copyright infringing, and yes, I know, they are still pretty bad, but yeah, I do like my references:
full character sheet

The last month didn't see much in terms of game development progress, the only thing worth mentioning is an interaction menu for NPCs and objects: 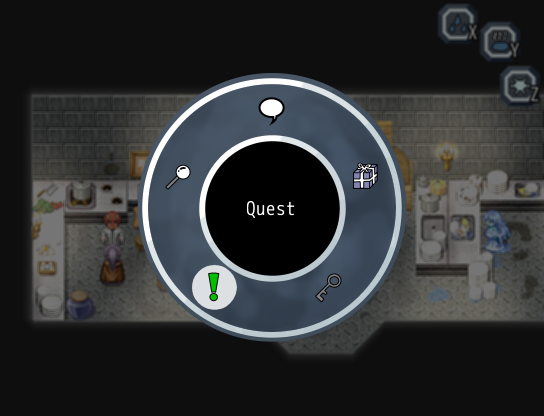 As mentioned before, development is a bit slower nowadays, nevertheless, the new greenhouse is done.

This wasn't really nesseccary, but I wasn't that content with the old one.
Now its a full on harvest moon esque experience with 625 fields instead of the 100 before and complete placement freedom.
It also runs better, since I now edit the parallax layers instead of changing 100 events. (And as a additional bonus, adding new crops takes way less time and only 1/12th the file size, so the whole thing is a a tripple or quadruple win.)

The intro is finally complete:

Decided to upload the whole thing since a demo is likely at least half a year away anyway.

From now on progress reports will likely be further apart. (only once every two weeks or once a month)

Some additional skill(machanic)s for the battle system

Some additional skill(machanic)s for the battle system are done:


And yeah, it's not much, most of this weeks progress was erased as I decided to scrap the 11 new maps I did for a harvest moon/pokemon/stardew valley style cave/mine.
Pages: first 1234 next last