The basics of the warfare system are implemented and working.

Here is a short preview:

Every unit has certain strength and weaknesses, as indicated bay the following chart: 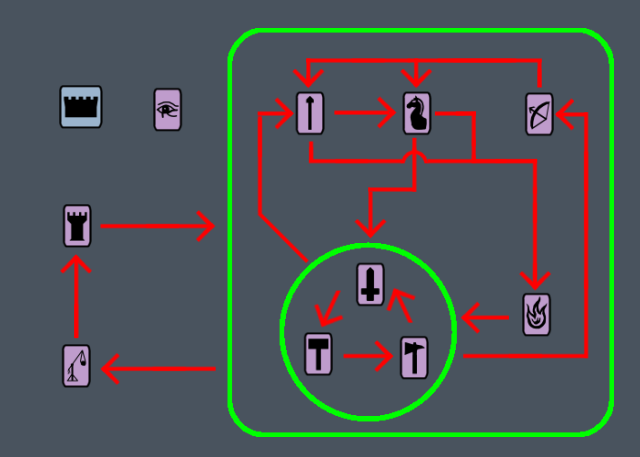 With this, all foundations of the important planned systems are done, whats left is to flesh them out and then finally go into full content production mode.

First off, have you noticed the new character artworks?
Those are leagues above the old mix of amateur art and character generator parts.

The new portraits have been made by pbjelly246, who has kindly offered her help.

Welcome on board, Jelly.

(She also got a game of her own, Memories of Elefee, which already got a demo out.)

Secondly, most of the planned content for the last arc (epilogue) has been kinda scrapped. The whole game was planned with a 3 act strucure + epilogue, but over time, the epilogue grew into its own 3 act structure. It's like you find a small egg, and out of it hatches a tiny lizard, so you decide it's cute and that you'll take care of it, and the next thing you know is, that there's now a dragon living in your garage.

"Latter day Saints" (starting in 255 AS) will end with
Show
a journey through the Sol system and the old space stations within it.

"Large dark Space" (starting in 1023 AS) will begin with
Show
a rebuilt, galaxy faring civilization at war with itself, and go on from there.


(Of course I won't start development for "Large dark Space" until "Latter day Saints" is done, only gonna work on some design documents for now.)

The new battle system is comming along well, all basic attack modes are implemented, as well as some custom effect skills (more of which will be added later in development), here is a quick preview:

Second part of the intro is done. (and with it a small bar brawl minigame)

Overview of all 60 possible party members

Double update this weekend, since I just finished the last face and character sets as well as coats of arms for the 30 possible party members of Chapter II.

That means all 60 characters are now complete.

Main Page has been updated, look there or follow this link to the infosheet.


Since I found out how much people seem to care for eye candy, I decided to add some portraits of the main characters to my title screen & for use in cutscenes.

I know the style of the body might clash a bit with that of the face, but its honestly the best I could manage. I am not an art person and this is my first try at drawing/coloring characters.

The end of the year is less than a day away and it just happens to be Screenshot Saturday.

Added 2 new Screenshots and a video of the Cooking and Crafting Systems:


Enjoy and have a happy new year.

The last part of the christmas update is the presentation of the barn.
The is a new video as well as an infoshet available on the game page now.

Next update is scheduled to go live around new years (eve).

Another (holi)day, another update.
This time its the barn, who would have guessed?

Updated most of the game info page to reflect the recent changes.
Added a video of the Intro (Chapter 0).
Uploaded 6 new screenshots.

Another feature, complete with video and info sheet, will be uploaded tomorrow and the day after.

Hope you all have happy holidays.
Pages: first prev 1234 next last