A Demo about The Calamity

Intro
Nihilio is an RPG Maker game set in a post-apocalyptic world where everything has gone astray due to something that is called The Calamity. It features two young men, Estes and Nicolai, who are traveling around the area. The current demo build ends at the first chapter that lasts for 4-5 hours long.

Graphics
The first thing that comes in order is the appreciation of the beautiful visuals. Nihilio portrays the post-apocalyptic world beautifully with its details. Abandoned buildings, junks, and even small bugs that are traversing around the area - everything looks different from the other. The dungeons are also made in the same style. They look more like point-and-click games with zoomed-in backgrounds that have various objects on them. There is definitely a lot of effort put into this and I couldn't praise it enough.

Story
The main plot is still full of mystery with a lot of uncertainty in it, which fits the explorative part of the main characters. More information will be revealed as you play, although again, there isn't much that you can get from it. The first chapter will let you know of what happened in one town and the existence of another being that came from The Calamity, but as for what causes it, it's still up in mystery. Nonetheless, the pacing and writing are good enough to keep me entertained.

The Game
Gameplay
There are a lot of customizations in the game, whether it's for the visuals or the mechanics. The demo hasn't fully explored everything yet, but we can see some mechanics like mode change in the battle system, stat distributions, and equipment upgrades, although some are still limited in nature. However, you need to read a lot to learn everything - people who don't like to read might be overwhelmed with the number of texts in the tutorial.

The gameplay itself is divided into two: exploration and combat. The exploration part revolves around exploring the area to find items that can be scavenged. This might be boring to some people since you need to interact with everything that you can see in hope of getting some loot. The good thing is that there won't be any battle going in this part. Simple puzzles will also be included in these areas where you need to figure out something from the given clue. I wish there are more of these puzzles to combat boredom. 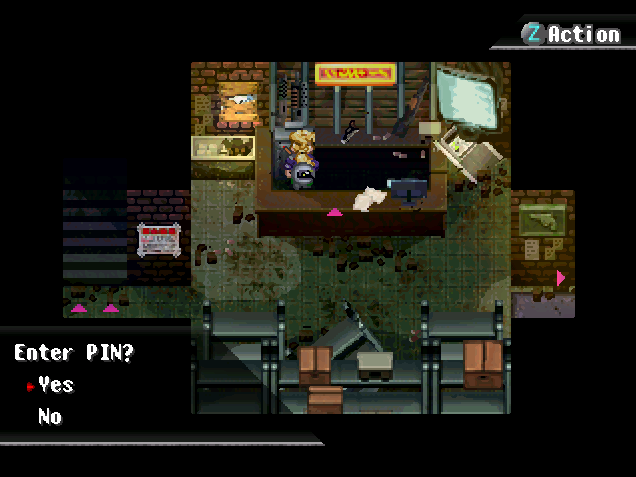 Combat
The combat part is usually happening in dungeons with various screens to traverse. Enemies are hidden from plain sight and will surprise you, which seems to be scripted since I don't see them reappearing in the same area after I switched screens.

Although Estes can attack the enemy without using resources, Nicolai's attack relies on ammo, something that can either be scavenged or crafted. The thing is, there's only a limited number of ammo. The demo might be generous with the number, but I'm not sure if I'll have enough if I keep on using them without thinking. Moreover, although Nicolai uses ammo to deal an attack, Estes always deal better damage, making him useless in fights apart from tanking damage, which tends to be problematic in boss fights. 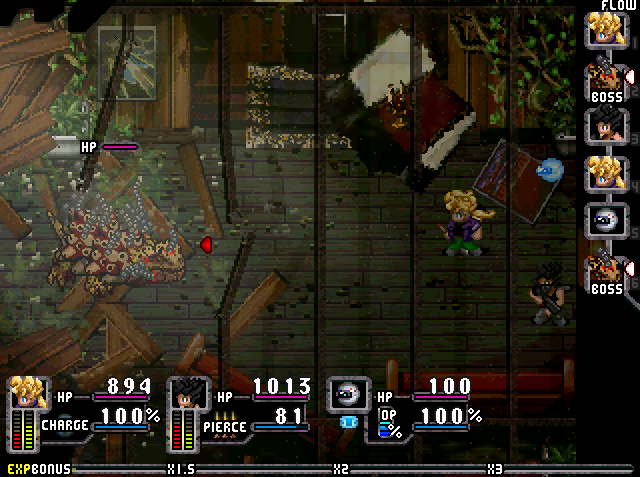 Bosses are tough. One of them can even damage 1/2 of your HP in a single hit if you don't invest in HP. Your robot healer, Auxi, might be able to heal your HP to some extent, but the number is very low and its speed is very slow. You need to tough it out in most situations, hoping that Auxi will get its turn before the boss wipes you out. It's not even rare to see your party members die just because of the boss' attack. All things aside, it makes boss fights to be challenging. I still dread that one boss that can damage 1/2 of your HP, but that can be mitigated if you play in a certain way. I just wish that it can be made easier to promote different playstyles though.

Length and Difficulty
The current demo lasts for 4-5h. It's quite challenging, especially near the end of the demo. Bosses will keep on coming and the exploration part can be a bit vague without specifying any objectives that you need to do. The minigame at the end of the first chapter also can be annoying to finish since it tends not to register your hit properly. 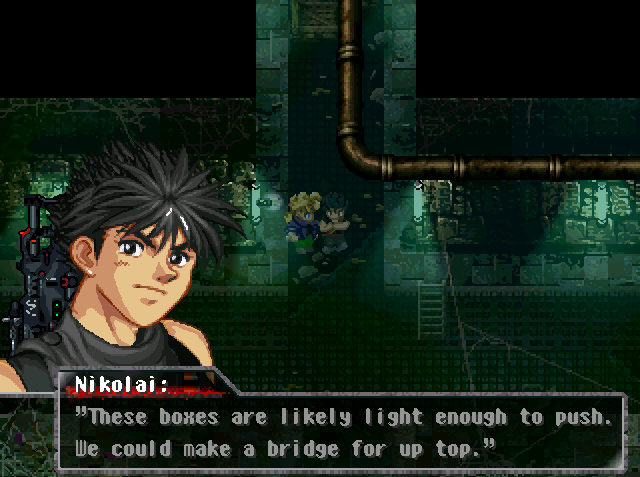 Problems
The dialogue is too slow. I hate it when it stops at punctuations. I tried to skip the text with the Shift button, but sometimes it will automatically advance the text, making them unreliable. The screen transition at the beginning of the game also goes slowly, and there is a bit of delay after you finished your turn in battle.

Pros:
- A lot of customizations for visuals and mechanics
- Scripted enemies
- Stat points can be redistributed anytime without penalty

Cons:
- Sometimes it can be hard to know where to go next, especially near the end of the chapter
- You are forced to use a specific build to beat one boss

Final Rating: 4/5
I can't praise Nihilio enough. The demo seems promising at this state and it has a lot of things to offer. There might be something that bugs me like the difficulty and delay, but it's still bearable at this point. I can't wait for whatever that the game has to offer in the next chapter.

---
Typo:
- When interacting with the note near the computer on the southwest house at the start of the game: "The whole street seemed to shake for serveral minutes." should be "The whole street seemed to shake for several minutes."
- When Estes talked to Alysee in jail for the first time: "But then, everyone has there reasons for travelling, don't they?" should be "But then, everyone has their reasons for traveling, don't they?"

---
Bugs:
- In the very first area, here is an action prompt when you go near the stuck elevator but you won't be doing anything if you interacted with it if you already flip the switch in the other room
- Enemies are gone from the turn list whenever they are attacking
- Interacting with this will turn to this
- Loot and notes seem to not be counted in the chapter summary. I'm sure I already looted and examined some notes but it says that I got 0.
- The game lags a bit when you enter Whisky Kimmel in Skuud

I'm so glad you enjoyed the atmosphere, I definitely put a lot of love into it.

I couldn't agree with you more on most points!
Puzzles should definitely be more prevalent, and WILL be in the chapters to follow.
The story will definitely unfold pretty slowly, but I think the overall story will be pretty exciting once revealed!

Just some notes;
1.
There is a "Current Objective" tab in the log book of the menu which should nudge you in the right direction, I don't know if you missed that, or if I just didn't implement it well enough.
2.
The chapter rewards weren't meant to be included in this demo, haha. They were accidentally included in the un-moleboxed version you download along with the beginning of chapter 2 you weren't supposed to see. They will be functional in the full release though. Sorry about that! That's completely my fault!
3.
The enemies disappearing in the turn order list is unfortunately a symptom of the rm2k3 engine. To animate my enemies completely, they have to be kod and then brought back for each attack, lol. It's silly, I know.

Anyway, I don't want to ramble too much.
I hope to address all these issues in the full release. I appreciate the time you took to write this very much!
Thank you for playing, and thank you for the review!
aquatorrent
5461

Close
12/19/2021 08:37 AM
i'm glad you like it! to be honest, i forgot whether i checked the current objective tab or not. i'll just list the two problematic issues that i remember in case you want to check them yourself:
- i didn't know how to end the exploration part before the biker gang comes. i just interacted with everything that i could and it turns out that i missed one item in the north house.
- the game asks me to hop over the boulder or something on the southeast screen after the biker gang comes. i didn't notice that you can and need to interact with the motorcycle.

anyway, thanks for making the game too. it has such a great quality and potential.
Pages: 1