The Fishermen and The Worm

NOTE: There might be spoilers, but I'll try not to put any.
NOTE2: English is not my first (nor my second) language, so sorry for any mistakes I've probably made.

The Fishermen and The Worm is an RPG in which the main characters go to an adventure to find a place to go fishing. Don't think you know how is this going: things in this game are unpredictable.

Gameplay
Gameplay it's the same as in a common RPG, but it lacks of item collecting and equipment (you just get important items sometimes). Anyway, this doesn't interfere with other elements.

Battles were very well balanced. Also, some of them gave you the only item you can get for yourself in the entire game (for healing).
I've got the feeling that battles were both unnecessary and necessary: there are some points where it's good that they happen, but at other moments I felt like they were useless. Good thing that random encounters were well timed and not everywhere.

Graphics
They're completely custom and great: I really liked how cartoonish and drawing-like everything was, and characters were very well drawn.
Each map had its own style it felt different every time (AND HOW...)

However, there's a problem with it: You notice tile borders in maps very often, and that's something that shouldn't be done in a game. Even if I didn't care that much, it's still not good. Maybe parallaxing would have been better, specially knowing how the art in this game is (if it wasn't done this way...).

Another thing that needed improvement were the ending credits: too simple for the nature of this game.

Music
It fits with each environment and moment perfectly. No song is out of place.

Technical stuff and the like
There's nothing new, relevant or wrong that I can recall. I didn't find bugs either. Everything went smooth.

Story
The thing that got me hooked and I liked the most. I always want good or powerful storylines to play through in RPGs, and this was great.

You're introduced to the origin of what they call 'Underground Fishermen' (Pretty silly story XD) and then you're shown their place nowadays (obviously underground), and two of the main characters: Fred, the reckless, no-neck fisherman and Jerry, a fisherman with an overly long neck, and apparently a bookworm (he loves reading). Jerry finds out that it makes no sense that they're called fishermen if they never go fishing, so Fred decides to go to the surface to find soemwhere to fish. Jerry, worried, goes with him, and there they find Deliah (the last main character), a worm that tells them that she was waiting them to come out from underground. She then agrees to take them where they can go fishing.
And everything starts to develop from here.

Yeah, it really looks like this will be something lighthearted 100%, silly and funny. Until you go to the first place (or 'Age', as they're called there). The mood swap is so sudden you can feel it. The author themselves said that this game wasn't for kids, and they were right: most Ages get disturbing, uncanny, or downright creepy (depends of the player here). And let's not talk about the themes here...
However, the only thing that keeps you from shivering is the main characters. They give you good vibes at any moment: they're funny and entertaining (and well developed) and will give you courage to complete those places, even if some stuff doesn't go morally right.
Its pace it's also great, so I don't think you'll be bored.

It will be better if I don't keep talking (I would go on and on spoiling), but I must say that at any moment this story disappointed me. I liked it from start to end.

Overall
This is one of the RPG Maker games I enjoyed the most. I tend to not to enjoy RPG Maker games this much (they tend to be too complicated, monothematic, unoriginal, or just not enough), but this game... even if it has small flaws, you won't take them into consideration unless you're too picky. I really recommend it.

Chivi's out, and gives this game a rating of...

Close
02/05/2014 05:18 PM
Oh, wow! I think this is the first ever positive review I ever got of the game. (People are very critical usually, this is a wonderful change of pace!) Thank you so much for your kind words, it really means a lot to me that you enjoyed my game!

I really can't thank you enough, you made my day! :)
Chivi-chivik 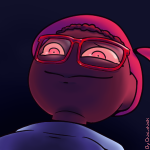 Close
02/05/2014 08:30 PM
Eheheh, you're very welcome! ^w^
People tends to focus too much on gameplay and small things (also, they go often for monothematic fantasy, and that's boooring)... I always preferred a great and original story over gameplay, and your game has that! :D
Pages: 1