If you're gonna go, go now.

Go is a short psychological horror game, produced for an unidentified game jam in August 2103 with the theme of Game Over if the readme of the developer is to be believed. Well when I say short that is in some ways open to interpretation, and the developer has kindly provided a guide in regard to length on the gamepage Playtime: 5 minutes -> ∞. Eternity probably would have been better than infinity, but there is no mathematical symbol for eternity (t∞ perhaps?). This ties into the basic premise of the game, the protagonist can find a way out in a fairly short space of time if they interpret the situation correctly, if they don't they'll be stuck for all eternity.

As the game opens you find yourself alone, having been recently abandoned in an unknown place, calling out for help elicits no answer or aid, so it's up to you to explore and discover a way to free yourself. The game was originally written in German and has been translated into English, though you can also play in the original German if that is your preferred language, so there are the odd grammatical errors, but all of them can be linked to the differences in sentence structure between the two languages and none cause any issues with comprehension.

The atmosphere is oppressive; a dark labyrinth full of strange whirring machinery and eerie music where any interaction you have is either hostile or confusing. The developer has employed some excellent graphics and sound to convey the feeling of alienation and neglect. The sprite used to represent you in the game doesn't offer any sanctuary either, an undistinguished dark grey shape with a slightly lighter highlight to indicate a mouth, seemingly frozen open in a silent scream.

There is no menu interface in the game, hitting esc will bring up the end game message box, which given it is the player's way of escaping the game I found unintentionally funny. Though the desperation of the protagonist begging you not to leave isn't amusing in the slightest. As there is no menu access there is also no ability to save so you need to make it through in one run. Which given the surreal nature of the game play is not an easy task. 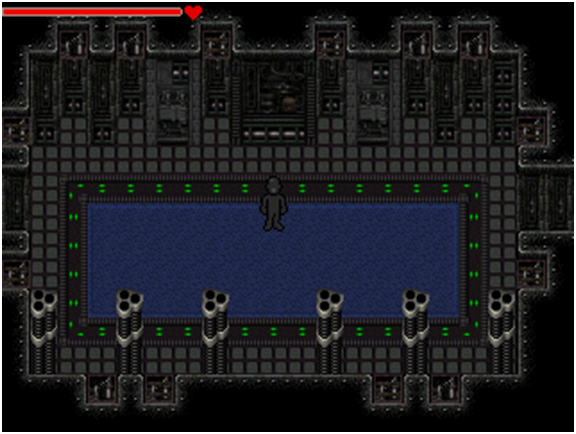 No eyes, full hearts, winning depends on your definition.

Your health is shown in a bright but unobtrusive HUD and as you progress run-ins with the enemies can and do reduce that meter. Though not in a battle scenario, you have no ability to fight back, only dodge and avoid the pawn shaped entities that patrol the structure if you want to keep that metre filled. Though being caught by them is a suicide run for them as whilst they damage you, they are destroyed in the process, at least until you enter the room again and then you are faced with a reset.

To mitigate the damage scattered around the labyrinth in which you find yourself are healing drafts which appear to remedy one collision with the pawns. There is a room that I've dubbed the 'heart' room you find about half way through the game which has an endless supply of health available in it, pumping through the chamber like a blood supply. It's the layout of this room that gave me a fairly vital clue in how to reach one of the two possible endings, though I didn't see it until I'd visited the room three times.

The game page warns there is no guidance and nothing to lead your way, and it's a fair disclaimer. The only messages you get are ones of despair, disgust and paranoia, nothing to indicate which, if any, switches you should trigger or buttons you should press. You'll find yourself going through the same rooms over and over again until you trigger a change of scene or a new event, seemingly at random. There is a logic to it, but it's an obscure one and even though I managed to finish the game and reach the end, I have only vague ideas about what the developer was trying to tell me, if indeed there was a message at all. 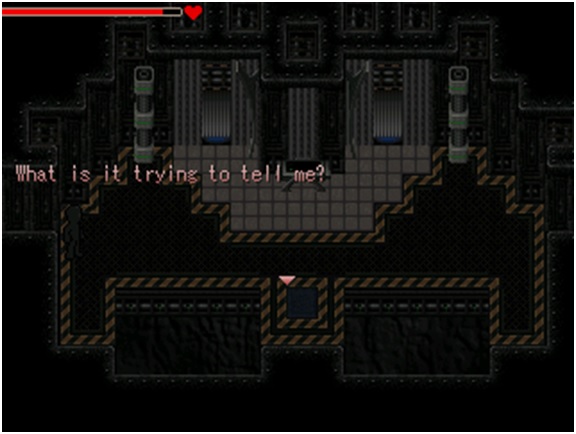 This game isn't for everybody; indeed it was on the border for me. In fact I'd say it would appeal to quite a small niche audience, ones who prefer not just to not have the story and answers handed to them on a silver platter but that actually appreciate not only having to discern what is going on, but also take pleasure in there being no one true answer to whatever questions the game or their reaction to it, posed.

Go doesn't expect you to think outside the box, it expects you to understand that there may never have been a box to begin with.

Close
08/05/2015 12:04 AM
I really like the way, you wrote down the essence of the game.
To be honest, the game was made in a few hours (including the horrible translation)
and more of a test, for dark, atmospheric level design.

The rating is more than justified, i am pretty astonished about the download counter of this lil project.
But hell ~ Thanks for reviewing! : )